Exposed: a monitoring team kept Panna’s only male from his cubs for four months after birth. 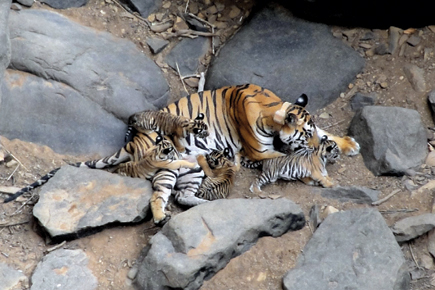 Exposed: a monitoring team kept Panna’s only male from his cubs for four months after birth.


With cubs from the only litter born to reintroduced tigers missing for three weeks now, officials seem to be at a loss to explain the setback to the Government’s high-profile drive to repopulate Sariska and Panna. One of the three missing cubs has apparently been traced, but the authorities have given up hope for the other two following reports of repeated fights between their parents.

While Dr Rajesh Gopal, head of National Tiger Conservation Authority, went on record saying that “such conflicts are common among tigers leading to the death of newborn cubs”, Panna Field director SR Murthy found it “intriguing” that the lone Panna male tiger that fathered the cub got aggressive with the mother and babies.

Official reports available with Open, however, reveal that the deaths are neither intriguing nor common. The conflict was the result of an unwarranted intervention, in violation of the basics of cat biology, by a joint team of the state forest department and Wildlife Institute of India that monitors the three reintroduced big cats in Panna.

In his note sent to HS Pabla, Principle Chief Conservator of Forests, Madhya Pradesh, on 13 September, field director Murthy admitted that while the father (T3) tried to approach the mother (T1) and cubs soon after they were born, the monitoring staff ‘did not allow such meetings’, essential in the wild for natural familiarisation.

According to this report, the litter of four cubs was born on 15/16 April. Shockingly, it took the monitoring team four months to get ‘technical and scientific opinions from all quarters and the project team of WII’ before allowing the father to meet the tigress and cubs on 19 August.

Murthy reported repeated fights between T1 and T3 once they were allowed to meet. In all likelihood, the tiger could not identify the cubs as his own and even tried to kill them so that he could mate with the tigress again, with T1 trying to defend them.

Male tigers are instinctively protective about their cubs and there are several recorded instances of them helping the tigress bring up babies by sharing kills etcetera.

Since T3 is the only male tiger in Panna, it is inexplicable why the authorities denied him access to his cubs. “Normal course of familiarisation would never have allowed such aggressive behaviour. Someone needs to explain how such a decision to keep the father away was taken under the nose of top forest officials and in the presence of experts from WII,” says Valmik Thapar, who recorded, as far back as in the 1980s, how male tigers took care of their cubs in Ranthambhore.