Inside the flea market of coalition politics

Deal makers, king makers and wannabe kings are at play 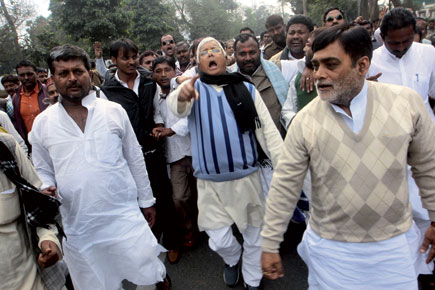 Deal makers, king makers and wannabe kings are at play

Bihar Chief Minister Nitish Kumar was away in Delhi to attend a meeting of the Left parties- led ‘Third Front’ when Lalu Prasad, his former comrade-in-arms and now political rival, walked past his 1 Anne Marg official residence to the Raj Bhavan, beaming, to inform the governor that all was well in his party, the Rashtriya Janata Dal (RJD). This came a day after the Bihar Assembly speaker declared 13 ‘rebel MLAs’ of the RJD a breakaway group. Before meeting the governor, Prasad— who had with him nine of the 13 saying they’d changed their minds and returned to the RJD fold—had hopped on to a cycle-rickshaw in Patna and walked through its streets with his legislators in tow. Prasad was at his feisty best, hitting out at Nitish Kumar for offering inducements like ministerial berths, Lok Sabha seats and money to his party MLAs in return for defecting to the ruling Janata Dal-United government, which was reduced to a minority when its 17-year-old alliance with the BJP ended last June.

The unkempt hair, loose jaunty walk, and sneer on his face—Prasad was his triumphal self again, a throwback to his prime days when he was CM himself. Without doubt, his survival of a rebellion within his party ranks offers a snapshot of the political wheeling and dealing that’s in full swing in many parts of the country with Lok Sabha polls just a few weeks away.

“Nitish is the main culprit,” says Prasad on the phone, but refuses to answer questions on disaffection among his MLAs. In a state that has seen plenty of jockeying by politicians to optimise their caste-religion matrix to pull in votes, the JD-U’s efforts to lure rival MLAs comes as no surprise. But what underscores the intensity of street savvy and canny aggression is the role of Abdul Bari Siddiqui, the RJD state chief who has emerged as Prasad’s prime troubleshooter to quell the crisis. A Patna-based political analyst calls Siddiqui the ‘originator’ of the current rebellion against Prasad: he has been constantly in touch with JD-U leader Rajiv Ranjan ‘Lalan’ Singh, a friend of Kumar who had briefly parted ways with him, only to return. Singh, a Bhumihar politician, had held several rounds of negotiation with Siddiqui and his RJD colleague and key collaborator Samrat Chaudhury over “terms and conditions” to defect from their party and join the JD-U, according to a person close to the developments who has asked not to be named.

But finally when Siddiqui felt that Chaudhury, the MLA from Parbatta, had gone one-up on him in his parleys with the JD-U, he turned “Lalu’s saviour by persuading members of his community who had formed a separate group by walking out of the RJD to return”, reveals an RJD leader on condition of anonymity. “And it seems he was successful,” adds the leader, “Of course, Siddiqui had his worries about his future in politics— and these were genuine.”

A popular leader among Muslims, Siddiqui had always eyed the Madhubani Lok Sabha seat, which he feared would go to Congress leader Shakeel Ahmed if the RJD struck a pre- poll alliance with its coalition partner at the Centre. An RJD leader and a Siddiqui loyalist tells Open that “[Siddiqui] is deeply committed to the cause of secularism and a tie-up with the Congress, to fight the Modi wave”.

Perhaps his commitment to personal success as a politician was far deeper. “The RJD, it is understood, has agreed to address his concerns,” says this loyalist. This simply means the party had to woo him back from the exit with greater inducements, contends the Patna-based political analyst.

Chaudhury, an influential leader among ‘Other Backward Class’ Koeris, who has refused to return to the RJD saying that Prasad has converted the party into a ‘B’ team of the Congress, is a prize catch for the JD-U as it tries to woo non-Yadav OBCs. Son of former senior RJD leader and former MP Shakuni Chaudhury, he wields far greater clout than Koeri leader Upendra Kushwaha, who has joined hands with the BJP to fight the Lok Sabha polls. Kushwaha, a former JD-U lawmaker, had parted ways with Kumar to float the Rashtriya Lok Samata Party last year.

A Bihar government official who has information on the talks between Chaudhury and JD-U leaders says ‘RJD rebels’ are being assured ministries in Bihar as well as Lok Sabha tickets. Chaudhury was irritated that the RJD leadership was not considering him for the Khagaria Lok Sabha seat.

True, Kumar has a lot to offer and lots more to gain. After a split with the BJP over Narendra Modi’s leading his party to the polls, the JD-U has just 115 seats in the 243-member Bihar Assembly but enough vacancies in the council of ministers: 16. Currently, Kumar’s survival is ensured by four Congress MLAs and as many independents. While Kumar was eyeing RJD MLAs to stay afloat in the face of a power shift at the Centre, his rival and former Deputy Chief Minister Sushil Modi, too, was trying to make the most of an opportunity. The BJP leader was instrumental is roping in Kushwaha, and he was looking for even more OBC switchovers. The electoral choices of all parties are dictated by caste dynamics, and so this is no surprise.

Then Ram Vilas Paswan happened. It was no secret that the Lok Janshakti Party (LJP) leader was upset with the Congress and RJD over seat-sharing for the Lok Sabha polls. The LJP was offered five of the state’s 40 seats, leading to a breakdown of talks with the RJD and Congress.

Paswan was ready to sacrifice a few seats to be on the winning side, says an LJP leader. “He also wants to establish the political career of his son [Chirag],” says this leader. As part of an agreement that Paswan has reached with the BJP, the LJP will contest seven Lok Sabha seats. It was the BJP’s former Civil Aviation Minister Shahnawaz Hussain who first got in touch with the 67-year-old Dalit leader. This was in mid-February. A few days ago, Chirag, Paswan’s heir apparent, met BJP President Rajnath Singh. A BJP leader who was part of the talks says his party had set down a few conditions for a pre-poll alliance, the most important being that Paswan keep his tainted leaders such as Surajbhan Singh and Rama Singh out of the poll arena. “The LJP demanded 12-13 seats in the beginning and the BJP has agreed to offer 7 seats,” says the BJP leader.

The BJP sees much symbolism in Paswan’s return to the NDA, which he quit in 2002. The veteran parliamentarian quit as a minister in the Atal Behari Vajpayee Government in April 2002, alleging that Narendra Modi’s government had failed to smother the post-Godhra anti- Muslim conflagration in Gujarat. He had even demanded that Modi be sacked as CM and President’s rule be imposed in Gujarat.

Sure, it is a political coup of sorts to secure a tie-up with Paswan, whose votes are considered transferrable. Hussain and BJP general secretary Dharmendra Pradhan were handling these negotiations. Ram Vilas Paswan is the most popular leader of the Paswan community, which accounts for 4-5 per cent of Bihar’s population and remains fiercely loyal to him. In next-door Uttar Pradesh, the BJP hopes several such sub-strategies will help it secure a huge chunk of the state’s 80 Lok Sabha seats. With ‘upper’ castes in both these states veering towards the BJP under Modi’s spell anyway, the party is looking at strategies to lure Dalits and OBCs in these states.

While the BJP and Congress are trying to forge alliances and strategies to outdo each other, the third alternative, or the ‘Third Front’ comprising Left and regional parties, have formed a non- Congress, non-BJP bloc of nine parties. However, two of its constituents, the Biju Janata Dal (BJD) and Asom Gana Parishad (AGP), were not present at a meeting they held in Delhi, sparking rumours that the grouping isn’t cohesive enough to take on the two main coalitions. BJD leader Naveen Patnaik has publicly stated that a third front is still in a nascent stage. The meeting was attended by the CPM, CPI, AIADMK, JD-U, JD-S, SP, Revolutionary Socialist Party, Forward Bloc and Jharkhand Vikas Morcha.

However, not all is hunky-dory among these parties. The Left has suffered a humiliation at the hands of the AIADMK, which, by declaring candidates for all 40 seats from Tamil Nadu and Puducherry, has made a mockery of coalition etiquette. Its chief J Jayalalithaa has announced that she will withdraw candidates from a few seats after pre-poll alliances take shape in the state. In effect, the Left parties have been relegated to her waiting list, says Chennai-based political analyst TN Gopalan. He attributes Jayalalithaa’s arrogance to “her picking up all the wrong lessons from her mentor, the late Chief Minister MG Rama- chandran.” Though she has mellowed down over the years, she is still temperamental, he notes. MGR, according to him, could get away with doing outrageous things like slapping a photographer for taking his snaps without his sunglasses and fur cap, but he was far more courteous. “He was a lot more accommodative,” avers Gopalan, “He had a benevolent patriarch image he revelled in… [but] she has none of it.”

Like in Bihar, the political scene in Andhra Pradesh is stark. The situation seems to favour the Congress in the soon- to-be-carved-out state of Telangana. But some political analysts believe that a merger of the Telangana Rashtra Samiti (TRS) with the Congress may not be easy and that the former will seek its “pound of political flesh” now that it has won its statehood game. Pundits expect the TRS, with the unpredictable K Chandrasekhara Rao at its helm, and the Congress to go for an alliance rather than a merger. While Rao did visit Congress President Sonia Gandhi along with his family, the relationship is still full of uncertainty, they say.

The TRS chief is worried that he may go the way of Chiranjeevi, who lost his political relevance after he merged his Praja Rajyam Party with the Congress. To retain its regional clout, the TRS is expected to ask for eight of Telangana’s 17 Lok Sabha seats to contest and demand that the Hyderabad seat be given to the All India Majlis-E-Ittehadul Muslimeen. Sonia Gandhi, who has come under sharp attack from Seemandhra Congress leaders for allegedly splitting a state to corner a few extra seats for her son Rahul, may play ball.

As assorted parties stare at polls, the scurrying around for deals in this political flea market may well intensify. There may yet be a few surprises in store as backroom bargains are aired in the weeks ahead. Voters, of course, are watching who is lining up with whom. “In this game, perceptions play a big role,” says Gopalan, “Which is why AAP is trying to court ‘honest’ leaders such as Marxist leader VS Achuthanandan in Kerala. Symbolism, of being seen with someone who matters, is all the more important in the time of polls.”