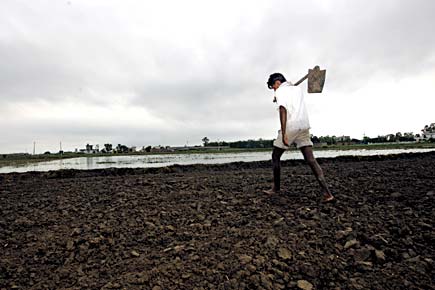 
Karnal Singh of Lakhnaur can’t tell for sure how old he is. But he is sure that he has spent more than six decades of his life growing food. Sitting by a dried-up well, the farmer talks of the times he drew water from it in the good old days. Like others in this region of Punjab, he would grow wheat, vegetables and coarse grains back then. In the late 1960s, when the Government declared that fighting famine was as important as fighting the enemy at the border, Karnal Singh and others began growing rice as well. The Government promised to buy all the wheat and rice they could grow, and poli­ticians assured them higher procurement pric­es year after year. “We have grown rice and wheat and nothing else since then,” says Karnal Singh.

Today, Karnal Singh’s submersible pump—in­stalled five years ago to draw water from 70 ft un­der—only gives him water in spurts. It’s time to dig deeper. For years, farmers in the village have relied on ground water for irrigation. For paddy, a crop which guzzles water like none other, there’s no greater relief than a few good monsoon down­pours to soak the fields and top-up ground water levels. This year, even as ground water sinks to ever lower depths, the monsoon rains have failed millions of farmers across north-western India—Punjab, Haryana and western Uttar Pradesh.

That this belt has been the ‘bread basket of the country’ ever since the 1960s Green Revolution that gave India self-sufficiency in food, only un­derlines the scale of the crisis. Farmers here con­tribute over 40 per cent of India’s food reserves. This time round, loading sacks of grain onto trac­tor trailers bound for mandis (markets) is a dream that’s rapidly running dry.

Desperate measures are being adopted. At Lakhnaur village, not far from Mohali’s Industrial Area near Chandigarh, farmers have been unable to resist irrigating their otherwise parched fields with effluent-laden water flowing out of drains from hundreds of industrial units. Most of these factories make heavy engineering goods and automobile parts, and the industri­al waste flushed into the drains is not just smelly in the extreme, it is also toxic. But Karnal Singh is merrily running a diesel pump that sucks this water and pushes it through a thick plastic pipe into his fields. “The choice is between starving and producing grain,” he reasons.

Worse than a Drought

In the same village, 40-year-old Harjeet Singh tills 12 acres of land. “We are a family of eight,” he says, “Together with my brother, I farm 12 acres, of which half the land is our own and the rest we took on rent for Rs 15,000 an acre. It hasn’t rained and I do not know how we will pay off the rent at the end of the year.” Harjeet Singh has left half his land unsown in wait for rains. On the other half, he has sown paddy using the industrial effluent others in the village are using. “The unsown area is too far from the drain. Or I would’ve used that water,” he says with a shrug.

All hope of respite is wearing thin. The Indian Meteorological Department estimates that North India will get 46 per cent less rain this season. But Punjab and Haryana face a deficit of nearly 70 and 60 per cent, respectively. Paddy sowing in the two states begins in early June and lasts for a month. Given how little of it has taken place, India stares at a foodgrain shortage ahead. “It is worse than drought,” warns Sucha Singh Langah, Punjab’s agriculture minister, “Punjab will not be able to meet its production targets at this rate. There has been negligible rain. We tried to buy power from other states and failed. Wherever farmers have managed to sow paddy drawing water with die­sel pumps, the cost of production has gone up.” A ministry survey indicates that the cost of grow­ing paddy this season in the state will rise 40 per cent and production tonnages could fall sharply on account of lower yield. Paddy has been sown in only 1.9 million hectares of Punjab this year, com­pared to 2.3 million hectares last year.

“Insufficient rains mean not just a delayed pad­dy crop, but poorer output and a delay in planting wheat. It is a vicious cycle,” says Harvinder Singh, 36, of Nilokheri in Karnal, part of Haryana’s Basmati belt. His family owns 55 acres in the area, of which 15 acres have been left unsown this year. “Even with a good monsoon, rice consumes four times more water than wheat,” he says, “It is mid-July and the government hasn’t yet re­leased canal water here. We can’t rely on the errat­ic power supply.” An acre of land under Basmati cultivation typically yields 15-20 quintals. “This year, it could go down to 7-8 quintals,” estimates Harvinder Singh.

Prices have already been hit. Some Basmati va­rieties are already hovering at Rs 100 a kg, set to rise further once crop failure is confirmed. The Haryana state government had a target of sowing paddy in 1.2 million hectares in the current kharif season, but only 715,000 hectares have been cov­ered. Since the state is a big supplier to the central pool, overall stocks are bound to suffer.

Union Agriculture Minister Sharad Pawar warned Parliament last week that this year will not be “as comfortable as last year” due to insuf­ficient rain in the north’s farming belt. “The prob­lem is serious,” Pawar said during question hour in the Rajya Sabha. “I hope the situation im­proves soon.”

Four days later, it still had not. On 13 July, Prime Minister Manmohan Singh set up an Empowered Group of Ministers to look into food security and related matters. With the Central and vari­ous state governments promising cheap grain to those below the Poverty Line—at rates as low as Rs 2 per kg—open market consumer will bear the brunt of rising food prices. By government data, grain prices have already gone up by over 12 per cent over the last one year. And this might only be the start of an upward spiral.