By George, This is Some Catfight; Deve Gowda’s Dastardly Speak; A Vidarbha of Their Own; Hand that Rocks the Caste Cradle; and HC Raises the Bar for Judiciary 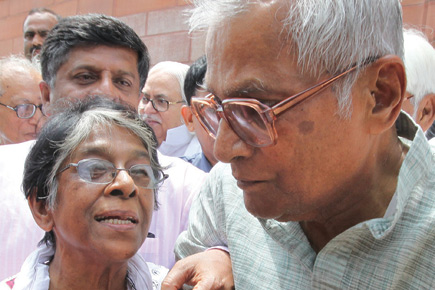 By George, This is Some Catfight; Gowda’s Dastardly Speak; A Vidarbha of Their Own; and Hand that Rocks the Caste Cradle


By George, This is Some Catfight

The backroom battle for George Fernandes’ legacy between his wife Leila Kabir and his high-profile associate of three decades, Jaya Jaitly, spilt onto the streets on 8 January, when there was a virtual showdown between them for the control of the superannuated rebel of Indian politics.
“The showdown has for the moment established that now Leila, and not Jaya, is in control of George Fernandes,” says a close associate of the leader.

According to a family insider, it all began a few days before Christmas, when Kabir, her son Sean and his family arrived at Fernandes’ residence and spent several hours with the ailing leader. “This so enraged Jaya Jaitley, who has been in complete control of the 3 Krishna Menon Marg premises of George Saheb for all these years, that all the staff members there were instructed not to allow this to happen again. As a result, on Christmas, Leila madam was not allowed to talk to George Saheb though she called up several times,” he says.

About a week later, on 2 January this year, Leila along with her son moved into 3 Krishna Menon Marg and took charge of the premises as well as Fernandes.

“The simmering tussle flared up on 8 January when the entire family went to a hospital for the routine check-up of George saheb and attempts were made by some interested parties to stop the entry of some George loyalists who are seen as anti-Jaya. Later, the matter was resolved after the police produced a letter that had been submitted by Sean to Tughlaq Road Police Station on 2 January itself,” says the family insider.

In the letter, Sean has requested ‘adequate security to all members’  of the family. ‘I also request you to kindly instruct the guards at the gate to allow entry to only such people whom my father, my mother and I wish to meet. All others are to be forbidden entry,’ states Sean, in the letter.

The letter further says: ‘I am apprehending foul play/physical harm from some people who I believe have been looting whatever is left of father’s assets and taking advantage of his poor health.’

“Though the letter does not mention any names, what it effectively means is that Jaya Jaitley must have no access to 3 Krishna Menon Marg,” asserts the family insider.

A Vidarbha of Their Own

The dramatic developments since Congress President Sonia Gandhi’s endorsement of a separate Telangana state has led to rising decibel levels in Maharashtra’s Vidarbha region for a separate state. Supported by the BJP, the Vidarbha Congress wants their own state, a demand they feel is justified owing to the increasing developmental backlog in the region.
Though the BJP’s partner, the Shiv Sena, is dead against breaking up Maharashtra, the former is confident that Bal Thackeray will see their point. But for now, it is the Vidarbha Congress that is belligerent. The shouting brigade is led by Congress MP Vilas Muttemwar and former president of the Maharashtra Pradesh Congress Committee (MPCC) Ranjit Deshmukh, both of whom have an axe to grind with the party high command. However, unlike Telangana, those demanding a separate state in Vidarbha lack large mass backing.

Former Prime Minister and Janata Dal (Secular) chief HD Deve Gowda’s abusing Karnataka CM Yeddyurappa as a “bloody bastard” has led to the bickering state BJP to close ranks and demand a public apology. Not once, but four times in a span of a few sentences, did the former PM abuse Yeddyurappa and other officials as he sat on dharna in a case relating to Nandi Infrastructure Corridor Enterprises which is building a Bangalore-Mysore highway and developing properties. Gowda, whose new year resolution is not to lose his cool, also followed it up with a Kannada invective, meaning ‘son of a bitch’. A day later, he admitted grandly. “Yes, I called Yeddyurappa a bloody bastard. I later withdrew the remark and expressed regret. They are looting poor farmers in the name of development,’’ he said.

Hand that Rocks the Caste Cradle

The use of caste names in the list of Bihar Pradesh Congress Committee office-bearers shows the Congress’ desperation to revive itself in north India by any means, even if this ends up undoing whatever progress has been made in rescuing society from a caste-based structure.

The list, which was leaked recently, has caste names like Rajput, Bhumihar, Kanyakubj Brahmin, Maithil Brahmin, etcetera, affixed to the names of its upper caste leaders. Scheduled Caste members have been classified as Chamar, Dushad, Pasi, Dhobi, etcetera, while details such as Koeri, Kurmi, Ahir and Vaishya/Baniya have been provided about members from the OBC community.

The leak has left Congress red-faced, but it has also revealed the Manuvadi underbelly of the party. Despite caste being an important factor in Indian politics, it is a fact that assertions by the lower and lower middle castes in the last two decades or so have gone a long way in dismantling the hierarchical structure of the caste system that once ruled India’s body politic.

The Congress’ obsession with its old days, when it ruled the country through a rainbow coalition of Brahmins, Muslims and Dalits, in which the former led while the latter followed, only indicates that the party still loves Manu more than it hates it.

The party’s rhetoric of taking the country into the 21st century notwithstanding, the fact remains that the Congress has once again treaded on a dangerous path that would take society back into the 20th century, when the lower castes had to survive in politics under the patronage of people from upper castes.
What the Congress is unmindful of is the fact that the last two decades have changed the social reality in the country following assertions by OBCs and Dalits. Society today is hardly ready to accept the Congress’ renewed attempt to restore the old order based on the Manuwadi arrangement.

Perhaps, the Congress is mistaken in its belief that its revival in Uttar Pradesh was due to the resurfacing of the rainbow coalition. The fact is that a section of voters here have started seeing the limits of caste- and community-based identity politics and, therefore, want to get rid of it.

The same is true of Bihar, where the Congress seems to be guided by its false experience in UP. If the party thinks it can emerge as an alternative in the state, it is simply because here, too, a desire has started building up against identity politics.

HC Raises the Bar for Judiciary

At a point when the Supreme Court seemed to have taken a stance contrary to the rule of law, the Delhi High Court’s judgment rejecting the apex court’s contention that the office of the Chief Justice of India is beyond the ambit of the Right to Information Act is a landmark one.

The HC bench comprising Chief Justice AP Shah, Justices S Muralidhar and Vikramjit Sen upheld last year’s ruling by Justice Ravindra Bhatt that rejected the SC’s appeal against the Chief Information Commissioner’s order that the CJI’s office is covered by the RTI Act. It ruled that if the subordinate judiciary is declaring assets, so should the higher judiciary. “So when they are accountable, so are we. Thus, higher the judiciary, higher is the accountability towards the public at large,” the bench said.  While pronouncing the judgment, the HC judges said they, too, would declare their assets.

The judgment should have laid matters to rest for the apex court as well. But, unfortunately, the lawyers representing the SC said they would appeal further—which means in the SC itself.

Besides, the country’s law minister is still making the wrong noises. On a day that both the Opposition and his own party, the Congress, welcomed the HC’s judgment, Veerappa Moily declared that he was more concerned about the independence of the judiciary. It was Moily who had in August 2009 brought in a controversial Bill in the Rajya Sabha exempting judges from making a public declaration of their assets. A united opposition in the Upper House ensured that the Bill was withdrawn.

While it will take an amendment or more to ensure greater judicial accountability, the Congress can at least teach Moily, India’s law minister, to respect the law.