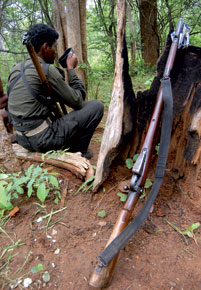 
In the past few weeks, illnesses and injuries suffered by Maoists have come to the aid of the Andhra Pradesh Police. Many Maoist leaders, who have sneaked into Andhra territory for treatment, are on the police’s radar. Some of them have even been arrested. The Andhra police have, in the recent past, received many tip-offs from their sources about the movement of Maoists, especially in areas bordering Odisha and Chhattisgarh.

On the afternoon of 4 June, the police arrested 40-year-old Kurasam Mothi Bai alias Madhavi, secretary of the CPI (Maoist)’s south Bastar division committee. The wife of another senior Maoist leader, Chandranna, Madhavi is believed to have participated in the recent attack on Congress party leaders in Chhattisgarh’s Darbha valley.

Madhavi and her associates were held after a 20-km chase on the Bhadrachalam-Kothegudem road near Palvancha town in Khammam district, Andhra Pradesh. The district police also arrested two others with her: A Pridhvi, a 22-year-old dropout from Hyderabad Central University, and his father A Dharmaraju, a railway employee. Both were known for their Maoist affiliations, the police say.

Their car overturned while its driver was trying to get around a police jeep blocking the road, at high speed. They were flagged down for a routine check when the driver gave the nakabandi (police road block) the slip and sped away. The police alerted all its men patrolling nearby areas, who in turn set up temporary roadblocks. Madhavi’s interrogation has revealed that she was headed for Vijayawada to undergo treatment for suspected malaria. All those arrested have been detained and sent to judicial custody, while Madhavi is being treated for the injuries she suffered in the road accident.

Another top Maoist leader, Sriramula Srinivas alias Sudarshan, was also arrested in Khammam on 23 March, when he, his wife and their two daughters entered Andhra from Odisha’s Malkangiri district. One of the commanders of the Maoists’ Andhra-Odisha border committee, 55-year-old Sudarshan was wanted in over 40 cases, including the assassination of the state’s former home minister A Madhav Reddy of the Telugu Desam Party, and the attempt on then Chief Minister Chandrababu Naidu. He is also an accused in the 2011 kidnapping of the Malkangiri District Collector Vineel Krishna.

Sudarshan was caught by the police while crossing over, and was being taken to a station when he tried to flee and was shot in the leg. He managed to hide in some maize fields overnight, but was arrested the next morning. His wife and two daughters, however, managed to escape. One of the daughters, believed to have been suffering from complications brought on by a fever, was being brought to Andhra Pradesh for treatment.

According to the police, Sudarshan, originally from Nalgonda district, went underground in 2009 when he was released on bail after his arrest for Reddy’s murder. He was arrested once again in 2011 in Odisha, after he led the team that massacred a group of Greyhound commandos travelling in boats, shooting at them from both sides of the Sileru river bank in Balimela. Sudarshan was released last year in exchange for abducted district collector Vineel Krishna.

Sudarshan’s wife Vimala, who has a bounty of Rs 6 lakh on her head, is allegedly involved in over a dozen cases but has not been found since.

Gopalakrishna, son of Akkiraju Hargopal alias Ramakrishna and effective No 3 in the Maoist hierarchy, was also sighted in and around Srikakulam town in Andhra Pradesh in the last week of May, allegedly visiting doctors, but escaped the police dragnet. He is said to have been wounded in an encounter with paramilitary forces combing the jungles somewhere in the tri-junction.

An NIA court in Kolkata had ordered officials to seize and attach the properties of the duo ‘whose dangerous and destructive activities in West Bengal (were) causing loss of lives and property.’ Revenue authorities in Karimnagar seized and attached Narayan Rao’s properties, including 1.37 acres of land. Ganapathi’s family’s properties included two acres of land and an RCC house in Birpur in Karimnagar district. That land has been barren for over two decades now, after other members of the family deserted it to escape frequent police harassment. The police say Rao left this house 40 years ago and never visited it after joining People’s War Group founder Kondapalli Seetharamaiah.