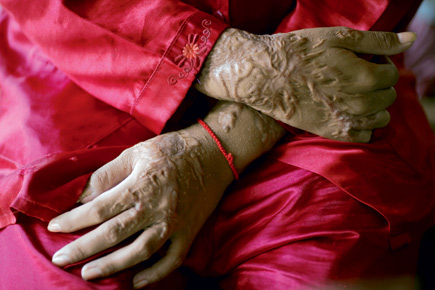 
Nitric, hydrochloric acid sulphuric acid are the most common weapons in the hands of the vicious who want to disfigure their victims for life. The damage inflicted by the slightest splash of the chemical is permanent— in physical, emotional and social terms. Women, almost always at the receiving end, often find their entire existence mauled beyond rescue. The way they dress changes, they turn socially awkward, give up their education, forget the prospect of finding a spouse (if unmarried, which is often the case), and watch their chances of achieving or retaining a career die a premature death. In a world that one must literally ‘face’, survival itself becomes a daily challenge.

Reliable statistics on acid attacks in India are not available since a large number of cases go unreported, particularly in rural areas. For one of the cruelest acts of violence imaginable, this lack of data is a grim reminder of how casually the country treats the phenomenon. But if there is hope, it lies in the stories of survivors who have pulled themselves together, put the attack behind them, and gone on to make the most of their lives. It’s not easy. New perspectives have to be shaped, new goals set. But it can be done, as these three stories show.

In May 1998, Shirin Juwaley was climbing the stairs to her home in Mazgaon, Central Mumbai, when she heard footsteps coming down. She looked up and life changed forever. A man dressed in black from head to toe threw something at her. She felt a warm liquid slap her face and a burning that tore through her. Within minutes, flesh had burnt away from her face. Police investigations later found that it was her estranged husband who had attacked her.

Coming from a middle-class Muslim family, Shirin had married on the rebound after a failed relationship. She was not keen on marriage, but did it for her parents’ sake. But it wasn’t working out. She wanted to move out but her parents felt otherwise. One day, her husband called in family members from both sides and sought their help to counsel Shirin to “sleep with him”. That day, her parents took her back home. The acid attack followed soon after. He left for the Middle East that same night, and lives free there even today.

Sixteen painful reconstructive surgeries later, Shirin decided it was time to stop trying to get back a face she never would. Her face had some shape now but the scars would remain forever. “Every time I looked into the mirror, I winced. Not anymore. Today, the image it reflects is a more confident me,” says Shirin Juwaley. She is 37 years old now and has come to terms with the tragedy.

“Plastic surgery is a myth. In the movies, a beautiful face emerges from a scarred face after the operation. In real life, every surgery leaves more scars. Your complexion changes,” says Shirin. Though she needs more surgeries, she has decided to stop. She is now comfortable with the way she looks, but it was tough reaching this stage. “Before the attack, I was beautiful. I had a future, a dream. Now I live from day to day. I have no qualms about my face. I like my face. I don’t want to look beautiful anymore.”

In the early aftermath of the attack, she was afraid of people (even looking at them), of cooking, of many things she took for granted. Depressed, she put on weight. A year of self-imposed isolation later, she decided to set up an NGO to help women in similar situations. Palash, the NGO, helps rebuild the lives of victims of disfigurement. They do this in partnership with the social welfare department of the government-run Sion Hospital “It is easier to talk to patients who are healing. We meet their caretakers too. We also help the patient deal with relationship management,” says Juwaley.

It was in 2001 that she actually emerged from her shell. She was invited for the World Burn Conference in the US. She went there in a burkha, but came back without it, vowing to never hide her face again. She lived there for 18 months, and interactions with various people strengthened her resolve to start adopting a new identity.

Shirin has a busy schedule today. She is invited to conferences and symposia, both in India and abroad. She is also the brand ambassador for an elite hair salon, Mad-O-Wat, the walls of which her face will soon adorn.

Despite Shirin’s achievements, there are always moments when she is reminded of her scars. Some months ago, a woman principal of a South Mumbai college refused her permission to interact with students. Her face was the problem. “I was told that she did not want students of the college to go off marriage. The principal was categorical—she would let unscarred volunteers participate, but not me. It was an eye-opener.”

She knows that people still cringe when they look at her, refuse to sit next to her on buses or trains, and young girls sometimes point at her and giggle. But she has moved on.

Mahalakshmi completed her MBBS in 1994-95 and worked for some time at St John’s and St Martha’s hospitals in Bangalore. In 1998-99, she opened her own clinic on rented premises in Mysore. When her landlord began to harass her, she left the place and asked him to return her deposit. He refused, and she approached the police. He continued to harass her and she filed another complaint with the cops. Then, one night, as she was headed home, he lay in wait for her with acid. He flung it and hurried away. In excruciating pain, her face asmoulder, Mahalakshmi stopped a couple on a scooter and pleaded to be taken to hospital. They refused. Finally, it was a patient, a child, who helped her into an autorickshaw and rushed her to Emergency.

It took the police two days to register a complaint because they were unsure about the jurisdiction of the crime. It then took about nine months for the chargesheet to be framed. She lost the case in the lower courts. The state government was interested in going for an appeal, but the director of Public Prose- cution didn’t want to. So Mahalakshmi approached Karnataka’s home secretary, and he certified that the case was fit for appeal. It was then admitted at the High Court. It is still pending there.

Mahalakshmi is now a campaigner against the government’s laxity in framing stronger laws against acid attacks. Educating victims, she feels, is crucial to bringing culprits to book.

Sneha Jawale’s torture began immediately after she moved into her husband’s home. He, along with his brother, started harassing her to get her parents to stump up a larger dowry. In 1997, they went to the extreme of burning her with acid. Recoiling from the effect of what he had done, her husband took her to hospital. He then called her family and begged them not to file a complaint. They complied, and her treatment began.

She returned home, but only to suffer a form of psychological torture. Her husband isolated her. She was not allowed to meet or interact with her three-and- a-half-year old son. No one in the family spoke to her. She was not allowed into the kitchen or bedroom. She couldn’t sit in the living room. “When the doorbell rang and if I was somewhere, they would ask me to go into another room and close the door,” recounts Sneha, “I longed to see, talk to and touch my son. He would come to me on the sly, and rub Vicks on my scars. He would get me fruits from the fridge. He was my pillar of strength.”

One day, they locked the house and took Sneha’s child away. She tried to get police help, but it proved pointless. Her parents stopped supporting her, and 50 days later, her husband filed for divorce in a court in Osmanabad. It was granted. “I have not seen my child since,” she says.

In response, Sneha did an unusual thing. Instead of succumbing to destiny, she began to study it. She visited astrologer after astrologer to ask them about her future. “I went to at least 150 of them,” she says. She even persuaded one guru to teach her astrology.

Today, Sneha is an astrologer herself, and fairly well known, locally. “An astrologer’s looks don’t matter,” she says, “Alongside, I also studied Tarot card reading, numerology, reiki, hypnotism, vaastu, feng shui and reading the remains in tea and coffee cups.” She is also a successful dialogue writer for Marathi films and TV serials. “Marathi film and television stars visit my house for private consultations,” she says, “This has made me popular with my neighbours. But my scarred face is still a talking point.”

After 20 painful surgeries, she has been advised more sessions under the scalpel, but is just not interested anymore. “Will I look beautiful? When I know it is not possible, why do it at all and waste money that I have to borrow? I am happy with my face. This is my face and if someone has a problem looking at it, don’t look.”