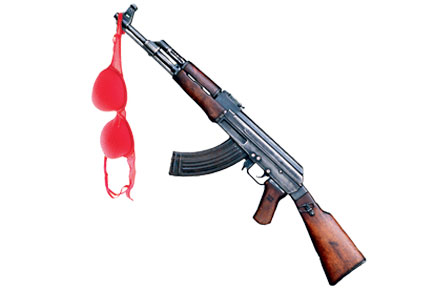 
Union Defence Minister AK Antony recently termed corruption in the Army an “aberration”, asserting that the Government would not tolerate a “single instance” of it in India’s armed forces. But when aberrations get institutionalised, it is time for a reality check. And there are plenty of signs that petty corruption by top Army officials is so routine now, that even lingerie can be bought—duly approved by the bureaucracy—with defence funds without anyone batting an eyelid. Now, the brassiere may once have been a marvel of aeronautical engineering, but how it helps keep India safe is not a question anyone can answer in a hurry.

The case in point is that of Lieutenant General Rameshwar Roy, director general of Assam Rifles, India’s oldest paramilitary force deployed in the Northeast. As the available records show, he used Rs 23,000 of the Assam Rifles’ regimental funds to buy lingerie, a sweatshirt, salwar suit and bedcovers, to name a few items in his long shopping list, for what can only be personal/family use. An amount of Rs 1,670 spent on a ‘hairdresser beauty salon’ remains unaccounted for; it had no cash memo.

Documents available with Open show that the ‘21C Bhagh Singh Dogra OC Transit Camp Kolkata’ incurred a total expenditure of Rs 23,000 ‘during the visit of Lieutenant General Roy and Mrs Roy in December [2011].’ The note is signed by Commandant MS Yadav, 28 March 2011, requesting ‘expenditure sanction’ to reimburse the money spent by the Assam Rifles’ director general and his wife. No objections were raised, no queries on the nature of expenses made. The note was later forwarded by the Brigadier, Administration, to the Additional Director General, who subsequently ‘sanctioned’ the expenditure on 28 April 2011.

The Government is aware of the purchases. Home Minister P Chidambaram was informed of it several times in writing by Ambica Banerjee, the Lok Sabha representative of Howrah, West Bengal. He got no response from Chidambaram or anybody else at the Ministry of Home Affairs (MHA). In a letter dated 9 October 2011, Banerjee expresses disappointment that no action has been taken against Lieutenant General Roy, despite his submission of documentary evidence. As he alleges in that letter: ‘[Lieutenant General Roy] has been telling his colleagues as well as [local] politicians that he has managed the MHA.’

A month ago, according to sources within the MHA, India’s Army Chief General VK Singh wrote to Home Secretary RK Singh, demanding the recall—back to the main Army—of Lieutenant General Roy, an officer currently on deputation to the Assam Rifles, which operates under the MHA. Banerjee alleges that the ministry is stonewalling the recall and hints that a corrupt army officer is thus being shielded.

In another letter sent on 17 October 2011, Banerjee, an engineer himself, makes a pointed charge of corruption against Lieutenant General Roy, asking Chidambaram to immediately issue orders for Roy’s recall. ‘Since [Lieutenant General Roy] has taken over as [director general], Assam Rifles, there is rampant corruption in the organisation. The engineering department is openly collecting 4 per cent money (of the contracted amount) from contractors for the DG.’ Three months have passed since, but the MHA has maintained a stoic silence over the issue.

On 16 January 2012, to get the Centre’s position on the scandal, Open sent queries to Chidambaram, RK Singh and also Nirmaljeet Singh Kalsi, joint secretary, Police II, the bureaucrat in Delhi who is in charge of Assam Rifles. We received no response whatsoever. However, sources in the ministry confirm that Lieutenant General Roy has returned the money he and his wife spent shopping.

The officer’s underlings have sprung to his aid. Captain Ramesh Singh, his staff officer at the Assam Rifles Director General’s office in Shillong, contacted by Open for Lieutenant General Roy’s stance on the issue, puts up a brave defence of his boss. He argues that since an enquiry is being conducted by both the MHA and Ministry of Defence, it would be inadvisable for his boss to comment on the matter.

That, however, does not stop Captain Ramesh Singh from dismissing—unofficially, of course—the documents with Open as fake. Then why there should be any enquiry at all, he fails to answer. The purchases of bedsheets and other items were made to furnish various guesthouses maintained by the Assam Rifles, he claims, extending an invitation to me to visit one of these just to see how nicely turned out they are (and perhaps to appreciate what a director general and his wife’s personal interest in such furnishing can achieve).

But how would a sweatshirt or salwar suit raise the comfort levels of a guesthouse? Also, what of the ‘beauty salon’? That little expenditure still remains a mystery. Cosmetics, he offers, are often stored at these guesthouses—presumably for the forgetful wives of touring officers who leave their vanity kits behind.

Moreover, Lieutenant General Roy and his wife seem to have travelled all over India to refurbish guesthouses. Take, for example, a power grip bought for Rs 65 from Odel Sports Company in Palakkad district of Kerala on 28 December 2010. Or the two plates picked up for Rs 500 from Sagar Emporium on MG Road, Port Blair, just a week earlier. There is also a bill that shows a pair of Bata shoes bought in New Delhi.

What about those? Lieutenant General Roy’s aide now has a larger conspiracy theory to offer: that the documents have been deliberately leaked as part of a sinister plot by “vested interests” to discredit an honourable officer who has served the Army for 40 years with distinction. What comes next is an emotive appeal. How could this reporter believe that such a senior officer would bother to siphon off such petty sums of public money? Why would he bill the Government such trivial amounts as Rs 1,670 for a ‘hair dresser beauty salon’?

That, indeed, is a good question. For it indicates how bad the problem has become, and with what impunity senior officers have begun to behave. Within the system, it was done openly—approved of and accounted for with no fear of anyone getting hauled up for it.

Back in New Delhi, Antony has a relativist justification for the falling standards of propriety in the armed forces: “Look at society as a whole, the various walks of life. Compared to many other institutions, the armed forces have a much better system of correcting things and punishing the guilty.”

With the Adarsh and Sukna land scandals still fresh in public memory, it is not clear how many people agree with that assessment. Some action has been taken. Last month, Lieutenant General Avdesh Prakash, a former military secretary, had to face a court martial for his role in the scandalous transfer of 71 acres of land adjacent to the Sukna military station in West Bengal. But the attention-hogging case right now is that of General VK Singh, who is waging a legal battle against the Government on the issue of his retirement age. But while these high-profile issues are sorted out, petty corruption in uniform continues to flourish. No one wants to ruffle through anyone else’s lingerie wardrobe, but given the battering the Army’s image has taken, every little case matters.