From Media Hero to Terror Suspect

Journalist Mohammad Ahmad Kazmi is in the dock for his alleged role in the terror attack on the vehicle of an Israeli diplomat in Delhi on 13 February. But he is no shady ‘freelancer’ working in obscurity, as the police are making it out to be 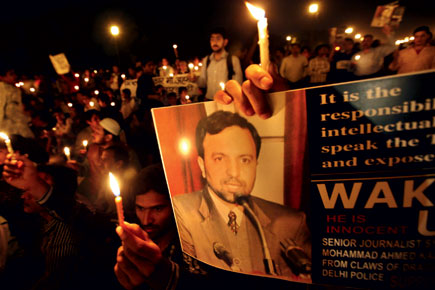 Journalist Mohammad Kazmi is in the dock for his alleged role in the Israeli embassy terror attack. But he is no shady ‘freelancer’ working in obscurity


In the spring of 2003, a motley crew of journalists was assembled by Saeed Naqvi, a veteran foreign affairs news broadcaster, writer and analyst. Satish Jacob, Sankarshan Thakur, Harinder ‘Shammy’ Baweja, Mohammad Ahmad Kazmi and I were part of Third Eye TV, set up by Naqvi to cover the then impending war in Iraq, the so-called Gulf War II. Naqvi had a legacy of a keenly watched weekly foreign affairs show on Doordarshan called ‘Worldview India’. The country’s metropolitan satellite TV news audience was unfamiliar with this show, but it was popular in smaller towns and cities. Since I had been part of the ‘Worldview India’ team, I was not surprised when Naqvi asked me to join Third Eye TV.

By mid-February 2003, the team was in place. At the first team meeting, it was clear that we had all been handpicked for specific reasons—experience in reporting wars and conflicts, field reporting skills, and so on. For example, I had some experience of reporting news from West Asia. Kazmi had been selected for his expertise and knowledge of West Asia, especially of Iran and Iraq. In the fraternity of Delhi journalists, he was quite well known as the India correspondent of IRNA, Iran’s official news agency.

Anyhow, we were told that we would be some of the few global ‘non-embedded’ journalists covering the Iraq War, and that we would all be briefed before we left for our varied reporting destinations: Satish to Baghdad, Sankarshan to the Iraq-Turkey border, Shammy to the Iraq-Jordan border, Kazmi to the Iraq-Iran border, and me to the Iraq- Kuwait border.

The plan was simple. Third Eye TV had been contracted by Doordarshan, with permission of the NDA-led Union Government, to report the Iraq War independently and thus be the ‘eyes and ears of Indian viewers’ so that they had access to a non-Western perspective of events in West Asia. We were to be ‘pre-positioned’ at various vantage points before Iraq’s invasion by US Army-led coalition forces. Our task was to enter Iraq as non-aligned journalists, unlike the legions of ‘embedded’ ones at the service of Western TV networks, and send video war despatches as we saw the war unfold. Our job, in brief, was to cover the war from an Indian perspective.

It might be useful to quote the then Director General of Doordarshan, SY Quraishi, currently the much-feted Chief Election Commissioner of India, to get a sense of why Kazmi was one of Third Eye TV’s most important team members. In a report published by the European Broadcasting Union in 2004, titled ‘The Media In Times Of War’, Quraishi wrote: ‘India had an independent view of the events unfolding and this independent view of things had to be communicated as it was considered that the BBC and CNN were not going to present a perspective which could be completely unbiased… The journalists of Doordarshan were selected on the basis of their credentials, their knowledge of the region and with a network of contacts in Iraq and its surrounding countries… By sending a team to Iraq, Doordarshan upheld its public service broadcasting mandate and, in particular, contributed to the plurality of information… Doordarshan became the unbiased voice for a large number of viewers both at home and in the Gulf… [The] team was in Baghdad well before the war started and informed viewers on the constantly evolving situation leading to the final negotiations and build-up of military operations in the Gulf… A crucial decision was about the timing of sending the teams. Too early would entail a drain on funds; too late would make it impossible for the team to enter Iraq. The right decision was made and our journalists were operational when the time came, allowing the network not only to stay ahead of all channels broadcasting [in] India but also become a source of crucial information to many networks around the globe… It had an unprecedented audience figure of over 11 million viewers on the evening of 20 March, 30 times more than the audience of all [other] channels put together… Doordarshan’s coverage raised questions that the Iraqi people were also asking themselves: what next? What is happening to ordinary people in Iraq?’

Kazmi was an integral part of this effort. By all accounts, he was crucial to Third Eye TV’s reportage from the region. In fact, he’d been picked for this project because, apart from Naqvi himself, he was the only one among us who had a superb ‘network of contacts in Iraq and its surrounding countries’. The value of this was evident when Kazmi pulled off an exclusive interview in Najaf with Grand Ayatollah Sayyid Ali al-Husayni al-Sistani, regarded as Iraq’s pre-eminent Shia Muslim leader. Kazmi was the world’s first journalist to do so, and this was the first time that global audiences got to hear what a religious leader who’d been severely repressed by Saddam Hussein’s Sunni-run Baathist regime had to say. Kazmi’s scoop was carried by all big TV networks across the world, and as Quraishi put it, made Doordarshan ‘a source of crucial information to many networks around the globe’.

In Baghdad, Kazmi and I met at the Palestine Hotel a few days after 9 April 2003’s famous made-for-TV iconic moment of the Iraq War: when a few American marines and an armoured carrier pulled down Saddam’s statue in the city’s main square, located opposite the hotel. I remember recounting to Kazmi how CNN had shown it ‘Live’ and used close-up shots to have the world believe that Iraqis at large were rejoicing. That is when Kazmi discussed with me his plan to travel south to get an interview with Ayatollah Sistani, which every single reporter in Iraq was trying to get. It was this interview that got power corridors across the Western and Arab world buzzing with democratic delight, for Ayatollah Sistani had announced that he would support elections in Iraq.

It was ‘breaking news’ delivered to the world by an Indian reporter who had risked life and limb in the interests of fair coverage of a highly controversial war launched by the US purportedly to ‘preempt’ Iraqi nuclear aggression. Kazmi’s achievements as a war correspondent were summed up by Saeed Naqvi in his ‘Wide Angle’ column of 2 May 2003 in The Indian Express: ‘Management of the media by the Pentagon on such jingoistic lines would have succeeded had there not been so many well equipped Arab TV units and a lively Doordarshan presence, operating outside the ‘embedded’ regime. While the Anglo-American electronic media brought to bear on the proceedings the CENTCOM’s perceptions (by and large), Al Jazeera, Abu Dhabi, Al Arabia brought out graphic images of Iraq’s agony. The balance was provided by Doordarshan’s Satish Jacob and Noh Nizami, living through the air strikes over Baghdad, VK Shashikumar, driving unescorted from Kuwait to Om Qasr, Basrah, Nassiriya, Najaf, Karbala, and Baghdad. Ahmad Kazmi took one’s breath away with his mobility—from Tehran to Arbil, Kirkuk, Mosul, Tikrit, Karbala, Najaf, Baghdad—all without any support structure to back him, either at CENTCOM or among the Iraqis.’

None of our team had insurance cover. We had no protective cover, no bullet-proof jackets, no helmets and no satellite phones. We had not much money either. In fact, the Spring/Summer 2003 issue of Transnational Broadcast Studies (tbsjournal.com), now known as Arab Media & Society (arabmediasociety.com) highlighted this aspect of our coverage by putting on record that ‘[Doordarshan] opted for a private company rather than expensive insurance for their correspondents to cover the war’.

But all that was nearly a decade ago. Why is it important now? Well, Kazmi, who was arrested a few weeks ago for his alleged role in the terror attack on an Israeli diplomat’s vehicle in New Delhi on 13 February 2012, is not some shady ‘freelancer’ who works in obscurity, as the police and investigative agencies are making him out to be.

In fact, far from being someone who has suddenly popped up on their radar, Delhi’s intelligence establishment has had more than a nodding acquaintance with him. He has been sending despatches to Tehran for years. But, more pertinently, just before Third Eye TV’s brave bunch of journalists left to cover the Iraq War, the Government of India at the highest levels had authorised two important briefings. One of these was by a large team of R&AW men and women held in a tony hotel just off Delhi’s Connaught Place. This hotel’s conference room was a convivial space, and even as we savoured the rarity of having agents we’d pictured behind hush-hush desks share with us both information and a fabulous menu of drinks and dinner, we marvelled at how up-to-scratch they were. R&AW had a dossier on each of us. We were, as we found, quite well known to these officers—Kazmi too, like the rest of us, checked, re-checked and scrutinised.

After a day’s gap, we were ushered into an ‘Operations Room’ in South Block. I met some contacts and friends there, having worked as a defence correspondent. Senior officers of the Directorate General of Military Operations gave us a thorough briefing of West Asia. They even offered tips on surviving ‘battlefield scenarios’, whatever that meant. They, too, had a dossier on each of us. We were quite well known to these officers as well—Kazmi too, like the rest of us, checked, re-checked and scrutinised.

So, why has he been picked up? ‘Are they after him because he writes in Urdu?’ asks Naqvi, a question that compels me to step out of my comfort zone and put on record what I know about Kazmi. Not too long ago, he was being hailed by the Government as a heroic war correspondent. Back in 2003, he was contributing to a ‘national cause’, as R&AW and Army officers put it. And now, he suddenly stands accused of a terror conspiracy.

One cannot make a special claim to the truth merely on the basis of one’s past acquaintance with a professional colleague. But Kazmi, apart from being a brave journalist, was well aware of how closely his life and career were being tracked. Now it’s up to those who care about justice to watch his case just as closely. The least a democracy with the longest written constitution in the world can do is ensure that Kazmi is presumed innocent unless and until his guilt is proven beyond reasonable doubt. Right now, it’s only an allegation.