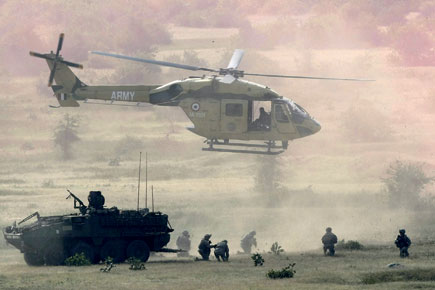 
At a time when the country is facing a crisis over paying for oil in dollars, a bid by Venezuela to buy Advanced Light Helicopter (ALH) Dhruvs from Hindustan Aeronautics Limited (HAL) in exchange for oil has surprisingly run into trouble. On the face of it, the Ministry of Defence (MoD) and Ministry of External Affairs (MEA), refused to consider anything other than hard cash, but this is only the pretext for the real reason.

Reflecting the sorry state of affairs within HAL, India has been unable to produce enough Dhruvs to meet its own demands, let alone those from other countries. Both the Indian Army and Indian Air Force (IAF) need these helicopters, but there is a shortage of about 100 in both services. A highly-placed source tells Open that “HAL was told long back by MoD to increase its production, so that the ALH could be exported.”

According to HAL’s own rule book, around 35-36 ALH Dhruvs are supposed to be manufactured each year, but only about 17-18 are rolled out, sometimes even less. Last year, 28 were to be manufactured but only 14 were delivered. “Earlier,” the source says, “extensions of about three months have also been given, but in the past year this was stopped and a 12-month deadline was decided upon. However eventually, a 13-month time-limit was given. But in the audits the dates can’t be tampered with; it will show up.”

The Indian Army presently has three squadrons of the ALH, in Manasbal, Nasik and Bangalore, and there are plans for an additional operational squadron in high altitude areas comprising the weaponised Dhruv. The French missile-making company MBDA has successfully tested Dhruv’s weaponisation by testing its Mistral twin-tube missile in Leh. Four such packs would be mounted on the chopper. The DRDO too has developed the Helina missile for the helicopter, for which launchers have been cleared.

The ALH Dhruv was supposed to replace the Cheetah and Chetaks, presently in use in the Army Aviation Corps. The project was approved in 1984 but, after more than two decades, the technical requirements specified in 1979 by the Army and IAF have not been fully met.

Defence Minister AK Antony has confirmed in Parliament that HAL’s track record on deliveries has been poor. The annual output per employee tabled in Parliament was Rs 43.49 lakh; it should have stood at Rs 1 crore. Moreover, the overall loss in terms of failing to meet its production target stands at Rs 4,000 crore, a figure that combines the cost of production and the penalty levied on HAL for failing to deliver manufactured aircraft on time to customers. If HAL does not deliver on time, it has to pay liquidatory damages. In the year 2011-12, HAL paid around Rs 100 crore in liquidatory damages for failing to meet its deadline. HAL Chairman RK Tyagi was contacted by this correspondent, but his office has not responded.

The problem is not restricted to Dhruv. Last year HAL was to manufacture 15 Sukhoi-30MKI fighters for the Indian Air Force, but it could produce only three. And this is an organisation that may soon be tasked with producing the Intermediate Jet Trainer (IJT) and the Light Combat Aircraft (LCA) Tejas (both for the IAF and the Navy).

The biggest foreign customer of the ALH Dhruv is Ecuador, which has been negotiating a price for further orders with India. An order of seven aircraft for $50 million was placed in 2008. India had already supplied five helicopters to Ecuador when an ALH sold to the Ecuadorian Air Force crashed during an aerial display at an air force base near Quito in October 2009. Inquiries showed that the crash was due to a pilot’s error, after which the Bangalore-based Helicopter Academy to Train by Simulation of Flying (HATSOFF) decided to train Ecuadorian Air Force pilots to prepare them for emergencies.

The price of the helicopter has since gone up from $8 million to $12 million because of upgrades, and price negotiations are underway. The Ecuadorian defence attaché in Delhi has been in talks with the MoD and Indian defence attaché in Chile, who also looks after Ecuador. The earlier Ecuadorian requirement of seven choppers has not yet been fulfilled, and there is now an order for more choppers, says a MEA source. Also, last year a defence delegation from Ecuador visited India to discuss the matter.

An MEA official tells Open, “The backlog of the Indian Armed Forces’ requirements is already huge; where is the question of exports?”