To boost milk production, the common bull is threatened by a fate that should horrify anyone with a conscience. It’s time to protest against this cruel government policy. 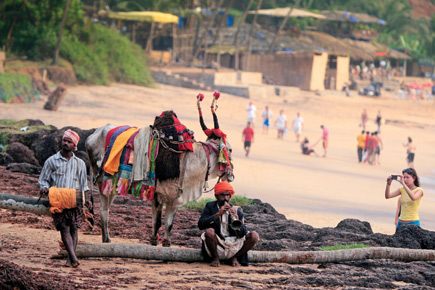 To boost milk production, the common bull is threatened by a fate that should horrify anyone with a conscience. It’s time to protest against this cruel government policy.


It’s a terrible time for the UPA, and the ‘man in the blue turban who saw tomorrow’ according to Nostradamus has no time to spare, what with all the peace phone calls to Pakistan, his Telecom Minister’s scandals, and a Cabinet full of people suffering from verbal diarrhoea. But there’s one worthy cause that all four of India’s esteemed estates, hyper-press-active NGOs and even the opposition have forgotten: the cause of the Average Indian Bull.

Let’s call him Average Bheem, the scrub bull familiar to us since mankind first ploughed the earth. Today, he has reason enough to be hoof-stomping, nostril-flaring, smoke-snortingly angry. Obsolescence in the form of the tractor was already upon him when India went into artificial insemination overdrive, withdrawing the conjugal privileges of the male of the bovine species in the bargain. Right now, as you read, there is somebody out looking for him with what looks like castration equipment—the reward, it seems, for doing all the grunt work entrusted to him. Heavy loads and stony fields, shackles and whips, captivity by stockmarkets, the bull has endured it all, even being reduced to represent just his droppings, and that too, as something to be dismissed forthwith.

Would you take it lying down (or whatever)? If the Government spent Rs 1,100 crore trying to impregnate your womenfolk with ‘elite’ sperm? And to think questions are being raised on the very utility of Nandi’s descendents in the Land of Shiva! Incredible!

THEY GOT THE WRONG GRIP

At a recent Nalwar cattle fair in Sundarnagar, Himachal Pradesh, the organisers went into a tizzy because they couldn’t find a pair of bulls to tie to a stake, the traditional way to declare the fair open. Bulls finally had to be brought in for the Chief Minister’s photo-op.

The artificial insemination project, meanwhile, goes ahead all ovens blazing. The ‘logic’ would do eugenicists proud. India is way behind the curve on its milk requirements, projected to double from 110 million tonnes this year to 220 million tonnes by decade end. Indians are gulping down the white fluid like there’s no tomorrow, and to satisfy this swelling demand, cows would need the semen of males that are virile enough to boost their offsprings’ lacto-productivity.

It’s outrageous. Especially since humans are the sole species to drink milk well into adulthood, long after it’s needed. Our post-mammary voracity makes us shamelessly steal from another species, snatching udders out of the mouths of little calves, and when that’s not enough, we re-engineer cows with turbo milk generators.

To nauseate yourself further, read the propaganda of the project organiser. The National Project on Cattle and Buffalo Development proudly declares its sole objective as bringing ‘all breedable females among cattle and buffalo under organised breeding through artificial insemination or natural service by high quality bulls within a period of 10 years’, and arranging the ‘delivery of vastly improved artificial insemination services at the farmer’s doorstep’.

So long as male sperm is still needed, you might think, bulls can’t be rendered redundant, right? Wrong. The goo isn’t from Average Bheem’s scrotal sacs. It’s from master bulls that are deemed exclusively worthy of procreation, the equivalent of well-chiselled Greek gods, busy inundating the sperm banks in duly designated fits and spurts.

It has all been calculated, according to AK Mishra, project director of the Indian Agricultural Research Institute’s cattle project in Meerut, to avoid wastage. So he insists: “The female, for a successful mating, needs 10 million sperms, while the male ejaculates 1,500-2,000 million each time.” One bull can be used for 200-300 one-on-one ‘services’, and artificial insemination lets them use just one bull for 15,000-20,000 doses. In the advanced West, he points out, a single ‘elite male’ can deliver up to 100,000 doses in a single shot (phew!). To his mind, this is much better than letting the “bad genes of the scrub bull” be propagated. “Scrub bulls don’t serve any purpose,” he says.

Villagers somehow don’t seem to mind. As Radhika Jha’s Lanterns on their Horns tells it, a litre or so of sperm frozen in a couple of milk containers is an escape from poverty for an entire village. And poverty alleviation is priority No 1.

Mishra admits that this spells a decline in the country’s scrub bull population; by the 2003 livestock census, work bulls are already 4.3 per cent fewer than the previous count. Professor VH Vataliya of Junagarh Agricultural University is not regretful at all. Scrub bulls, he says matter-of-factly, “have to be castrated and phased out”, and it would’ve been done sooner if agriculture and livestock had been a state subject. Castrated and phased out? Yes, these experts believe, so that 5 per cent of India’s bulls, the ‘elite’, can have complete reproductive exclusivity. And their artificial female offspring churn out 3 litres of milk extra.

But what about Average Bheem? Doesn’t anybody care? True, his appearance is far from majestic, his horns aren’t the size of flag masts, and his horniness does little for those crowds of milk gulpers. Average Bheem is clearly not going to model for Bullworker, but he does have his own earthy charm, the sort that gives Charles Darwin’s theories of natural selection and cinema soothsayer’s stories of someone-special-for-everyone their enduring appeal. Had sand kicked in your face? Relax, it’s sure to be a turn-on for someone. And whatever happened to the romance of the humble hero winning the girl in the red Flamenco dress?

The fate of the common bull elicits sympathy from Professor VK Ghandotra, head of the veterinary science department at Amarjit Singh Punjab Agriculture University. But he wants us to get real. “People anyway discard the male calf,” he says, “because it doesn’t make any economic sense to them; farmers don’t feed them or give them cow’s milk because that is an even bigger economic loss.” So, it’s either preservation of the scrub bull, or milk adequacy.

At the cost of male infanticide? Animal rights activist Ambika Shukla agrees that “the utility of the scrub bull is on the decline” and the “misguided policies of the Government” are pushing Average Bheem to the edge of survival.

The big heartbreak of the story is the treachery of man. After Noah and his cargo disembarked after the Great Flood, he promised to get the best possible deal out of God in future negotiations, as Julian Barnes recounts in A History of the World… He promised animals a palatial life, and unlike the reindeer, tiger and other animals that ran as far as they could, the bull stuck around… not just because loyalty ought to count for something, but where could he go now?

SWEET CHILD OF THE DATA MINE