Don’t Worry, It’s Only a Flood

The attitude of the establishment towards the recent floods in Bihar: it happens 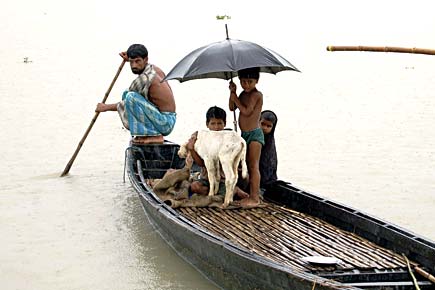 The attitude of the establishment towards the recent floods in Bihar: it happens


On Monday 3 August, the Lakhandei tributary of the Bagmati river breached its embankment at two places in Muzaffarpur in Bihar, and also affected the neighbouring Sitamarhi district. More than half a million people are said to be homeless.

Chief Minister Nitish Kumar has surveyed the flood-affected areas from the comfort of a helicopter and announced relief. Rescue operations are underway and those responsible for being unable to prevent the breach, he promises, will be punished.

So what’s new? “Don’t worry much about floods. Floods have affected a limited area and that can be tackled. Drought is the main problem that Bihar is facing,” Kumar has said.

That is the attitude towards floods in Bihar: it happens. The man-made tragedy of floods that the Bihar government can prevent is seen as routine, and monsoon failure considered more devastating. Voices of reason that were heard in the Kosi floods last year have yet not reached Kumar’s ears. The problem is not the frequent embankment breaches, as many as 300 a year across India, but embankments themselves.

When the river Kosi overflowed last year, the government first said it had changed course. That’s a good way of covering up the sorry tale of embankments. People have lived along these rivers for ages, and their swelling during monsoons is something they are used to. Before embankments were set up, flood waters with sediments would spread to a wide area and drain out. Once embankments are built, sediments collect in the river and the water level rises year after year. More money is spent for de-siltation. Every now and then, some engineer ignores the rising water and the embankment is breached.

Dinesh Kumar Mishra of the Barh Mukti Abhiyan has for years been pointing to figures linking the growth of embankments (from 160 km in 1952 to 3,438 km today) to the spread of flood-prone areas of the state (25 lakh to 68.8 lakh hectares in the same period). The conclusion is obvious, but the Bihar government continues to spend more on flood control. Why?

A key official in charge of flood relief last year told me how the endless construction, extension and repair of embankments is an industry which serves the purpose of begetting kickbacks for politicians and bureaucrats through tenders of high values. Not to mention the known history of corruption in flood relief itself.