The Telangana agitation has the city in hyperventilation mode on both sides of the divide. What’s hurting badly is Brand Hyderabad. 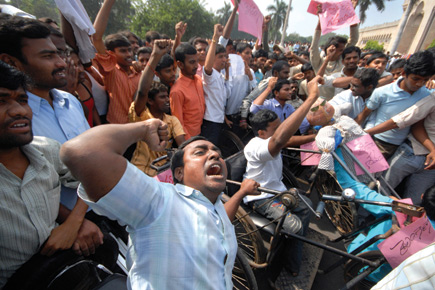 The Telangana agitation has the city in hyperventilation mode. What’s hurting badly is Brand Hyderabad.


Once there was a city that fancied itself as Cyberabad, rival to Bangalore as India’s infotech capital, blessed with silicon powered visitors from the US, and verily ennobled by the headquarters of a software exporter named Satyam. If Cyberabad went the ‘India Shining’ way, an illusion shattered by grim realities, it wasn’t long before Satyam’s halo was popped by revelations of corporate fraud. But Hyderabad took these as mere blows from which recovery was all but a matter of getting its wits together again—until Telangana burst onto the streets.

Today, businesses based in Hyderabad are a stricken lot, as this one-time seat of Nizami grandeur stares at an uncertain future. It is at the centre of a tussle between Andhra unionists, who reject the state’s proposed division and want to retain the city as its capital, and Telangana creationists, who want a separate state hewn out by that name with the city within its borders.

That business would flee the city if Telangana came into being was once just a wisecrack, given the sway of radical Maoists over this underdeveloped part of Andhra Pradesh. Now, it’s no idle threat. Worried by all the political unrest, the Andhra CM K Rosaiah expressed apprehension last week. “I have been told that many corporates are looking at options,’’ he said at a press conference, while appealing for peace. Next day, a frustrated CM said the film industry would go right back to Chennai if attacked by Telangana agitationists, whose litany of complaints includes the portrayal in villainous light of people from the neglected region. “More than 70 per cent of film industry workers are locals,” said the CM, “contrary to rumours being spread.”

Y Harishchandra Prasad, chairman of the AP chapter of the Confederation of Indian Industry (CII), sums up the corporate mood: “The year 2009 started with the slowdown, and compounded with the shock over Satyam, general elections, political instability over the YSR succession issue and floods, we have finally entered a state of numbness—with cascading regional biases and agitations vertically dividing the state of 85 million. Not just law makers, even law enforcers are divided.”

It’s just the sort of news that probably reaches Bill Gates ‘at the speed of thought’, given the Microsoft founder’s famous management advice that bad news must reach the top instantly, even if good news takes its own time (typically, it’s the reverse, which is what dooms big organisations ). Microsoft, Google, Accenture, Infosys, Wipro and TCS, all have software campuses in the city. It doesn’t help that the infotech industry, the most visible symbol of Hyderabad Inc, was already reeling under the world’s Great Recession.

“Just when green shoots of recovery are in sight, we do not want to lose out,” says M Narasimha Rao, president, Hyderabad Software Exporters Association (Hysea), “The last one month has seen severe disruption over the Telangana issue, with bandhs at the drop of a hat. It cannot go on like this. The bigger worry is the uncertainty, as business continuity plans cannot be changed frequently.” So, it was a high-strung Hysea delegation that met the state’s political who’s who on 2 January—the CM, apart from TDP chief N Chandrababu Naidu, PRP leader Chiranjeevi, and the TRS’s K Chandrasekhara Rao, the last being the agitationist-in-chief for Telangana. They were all “very understanding”.

That’s too little, too late. Brand Hyderabad has already taken a beating. “Already, there is a US government advisory against travelling to Hyderabad,” says BVR Mohan Reddy of Infotech Enterprises, who was also a member of the Hysea delegation, “Over 50 per cent of infotech exports are US-centric and such an advisory has already rattled the industry here.” Reliability as a brand attribute has been hit hard, as another infotech honcho explains: “Our promoters and vendors have expressed concern over whether Hyderabad companies, including multinationals, that reported 40 to 65 per cent absenteeism on bandh days can keep up their delivery schedules.”

The gleaming towers in Madhapur and Kondapur, where the hi-tech ITeS units are located, can’t pretend that nothing has changed. Software exports have soared from Rs 600 crore ten years ago to some Rs 32,000 crore now. There are 1,300 ITeS units here. All of it, now at risk.

State support, says Rao, was a part of the growth story. All this could vanish if an investor-unfriendly government took charge. “The whole world is watching,” warns a pharma sector chief, “Sooner or later, they will pull the plug.” Genpact and Deloitte, which had big plans for Hyderabad, are already doing a rethink. Jobs are at stake.

Most infotech campuses remain a picture of serenity, though. The landscaped gardens, waterfalls, multi-storey car parks and glass edifices that defy gravity seem to be in perfect harmony with the employees walking around with coffee cups or folders in hand. But the relaxed atmosphere masks the political uncertainty. Those who have their ears to the ground can hear the distant rumbles, and they fear disruption. “In my office, there are very few hardcore anti- or pro-Telangana employees,” says a corporate communications head, “Most people don’t care, as they know they are talented and can find jobs anywhere.” But the sense of insulation may not last. “Our biggest fear is that we have busloads or cabfulls of employees moving around the city at odd hours. What if there is an attack?” asks an executive who has been working overtime to keep the police in good humour.

“The police are doing a good job, but there is a big ‘what if’ situation that can spiral out of control,” he says, adding that employees are looking to relocate to other cities in increasing numbers. Real estate has been a casualty. Flats that sold for Rs 60 lakh three years ago are half-priced now.

What might Telangana do to the city’s cosmopolitan culture? That’s an anxiety. But there is also optimism. “Hyderabad is what it is because it is cosmopolitan and has a culture of tolerance where people from all over come here and settle,” says Kavitha Srinivasan, who has been here for three years with her husband. She hopes the crisis will soon be overcome.

Ominous signs suggest otherwise. At Hotel Dwaraka, a white paper has been stuck on a neon sign that once announced its famed Andhra meals—in fear of attacks by pro-Telangana activists. That feelings run high is evident from vehicles seen plying the city. Several licence plates have ‘TG’ plastered over ‘AP’ to supposedly signify solidarity with the cause; of course, activists have been forcing such defacements.

All this turmoil unnerves residents like Visweshwara Murthy, a Kannadiga settler in Hyderabad since the 1960s, who is now thinking of moving to Bangalore for the sake of his young daughters. “One is in high school and another in middle school,” he says, “With the kind of bandhs and violence we witnessed this past month, I think Hyderabad is no longer a safe city for young girls.” Andhra settlers, as people from the coastal and Rayalseema regions are called in Hyderabad, are thinking along similar lines nowadays.

Even New Year’s Eve parties this year were held under the shadow of fear; with enraged Telangana activists prowling around, any celebration could’ve provoked an attack.

Beyond the infotech sector, which fears a possible reversal of Chandrababu Naidu’s modernisation drive, analysts feel that the film industry might suffer even more if the crisis continues. Financiers, producers, exhibitors and even actors are mostly from coastal Andhra, and most of them migrated from Chennai to Hyderabad at the invitation of the state government. Thespian Akkineni Nageshwar Rao and producer K Raghavendra Rao, for example, came in the 1970s and built studios and film-processing labs. This helped expand the Telugu film industry, which now turns out some 200 movies every year. “It’s a flourishing industry where a day’s disruption can make or mar a producer. That’s a reason the film industry is not taking sides. Recently, veteran actor Mohan Babu’s shoot was disrupted after he joined the samaikhya (united) Andhra lobby,” an industry watcher tells Open. The industry seems confused about the future of Telugu identity, though optimists feel that linguistic unity can overcome political divisions very well through the creative arts.

Alas, as of now, uncertainty rules. And it is sapping the energy of everyone with a stake in Hyderabad’s future. On the streets, the collective angst that is the Telangana issue is drawing passions into a vortex from which escape may well nigh be impossible now. With Rayalseema and coastal leaders taking up the unionist cause with gusto, the confrontation can only get worse, suspect observers.

Global clients remain on edge, wary of any possible disruption of ‘business processes’ that have been outsourced to Hyderabad. Inclusive growth is not a criterion foreign investors have had to track before. From Hyderabad’s recent experience, they may well have to. As Bill Gates had demanded, the bad news first.