Why the world loves the Gulabi Gang 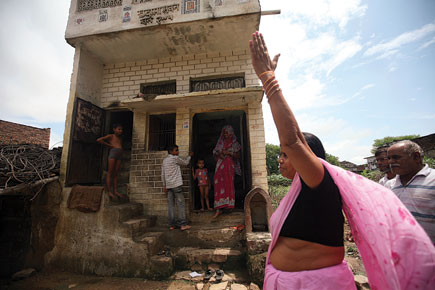 Why the world loves the Gulabi Gang


MANIKPUR, UTTAR PRADESH ~ Few expected to see Sampat Pal’s name in the Congress party’s list of candidates for Vidhan Sabha elections in Uttar Pradesh next year. She wasn’t expecting it herself, considering she wasn’t even a party member.

Most party members are outraged, a few envious. Her opponents are nervous. On a tea break from her door-to-door canvassing in Mahu village, Manikpur constituency, she tells the locals with pride how some people paid lakhs to get her name deleted. They called up Diggi Raja (Digvijaya Singh) and his answer was succinct. She was selected by the High Command—Sonia and Rahul Gandhi. So, it may as well be etched in stone. This isn’t Sampat’s first tryst with politics though. In 2007, she stood for elections as an independent candidate, and lost. But in the recent gram panchayat polls in UP, 22 of the 24 candidates she supported won (one of them was her son).

Sampat Pal is a barely educated, Scheduled Caste woman from Bidausa village in Bundelkhand. She was married off at 12 to a much older man and had her first child at 15. She made news when she slapped a policeman in the Attara police station in late 2007 for unlawfully detaining a man, against whom not even an FIR had been filed. She got away with it only because the police station was surrounded by women in pink saris, the uniform of the all-female vigilante outfit that she had founded. That single slap reverberated through the national and international media. The world learnt about the Gulabi Gang—a group of women dispensing their own brand of justice in matters of oppression, corruption and injustice.

A narrative emerged. In the heart of India (rural, patriarchal, dacoits, cows being key descriptors), women found a hero in Sampat Pal. Sampat, the underdog herself, who intervenes where law refuses to and tradition exploits. She has since been written about in Daily Beast, Slate, The Washington Post and Marie Claire, even the BBC website. This year, she made it to The Guardian’s list of ‘Top 100 Women: Activists and Campaigners’. Several documentaries have been made on her, including a critically acclaimed one by British filmmaker Kim Longinotto. A French biography, Moi, Sampat Pal: Chef de Gang en Sari Rose, was published in 2008, and another book, The Pink Sari Revolution by Amana Fontanella Khan, is on its way.

Sampat Pal hasn’t just met Sonia Gandhi, she also met her mother while promoting her book in Italy, and her son Rahul in India. When Tabu tried to make a film on her life, she sent her a notice, prohibiting it, because she doesn’t trust Bollywood. She has seen enough movies to recognise their love for “mirch masala”. She’s right. Village women resorting to violence to avenge their honour is a hackneyed formula in Bollywood. And who can resist a wet sari number when the colour of the garment is pink?

Although Manikpur has suffered from drought for the past few years, it is pouring now in the middle of September. Driving from village to village, Sampat is excited. These rains, unlike previous ones, will do wonders for the crops. Even the gods are happy with her standing for elections, people in the car joke.

The world loves Sampat Pal, especially the West. It loves her for her courage, which is inspiring. She confronts people who have raped or raised their hands on women, or those who have killed a newborn because she was a girl. She confronts them in public. For the documentary Pink Saris, Longinotto filmed the story of a young girl who came to Sampat for help; her father-in-law had repeatedly raped her. Sampat confronts the old man in public and threatens to send him and his son to jail. You can see the old man squirm. Sampat manages to transfer the shame from the victim to the oppressor.

The impact of such scenes, says Longinotto, is enormous even among audiences in Europe. After screenings, she has had people come up to her and say, “If she can do it, so can we.” The father-in-law in the film could be a priest in Italy or a politician in France. The struggle to break the silence is universal.

Europe loves Sampat Pal for giving a face to feminism in the globalised world. Cecile Burnier is one of the founders of Gulabi Association, a French organisation created in 2008 to support the Gulabi Gang. The association has donated 16 sewing machines and one laptop to the skill learning centres run by the Gang in villages. Cecile first read about the Gulabi Gang in the French magazine Marie Claire, and later met Sampat herself while she was promoting her book in Europe. For her, Sampat is extraordinary because of her courage, charisma and, most importantly, her intelligence. “She is reinventing by herself philosophy and politics she was never taught,” says Cecile.

The genius of pink balances the violence of body language and words Sampat Pal indulges in, although she emphasises that she has only raised her hand on men twice in her life. The first time, she calculates, she was the mother of only one child, so she must have been around 15 or 16 years old (Sampat keeps track of her own age, and time, by that of her children). She had repeatedly warned a relative who beat his wife to stop doing so. Eventually, Sampat gathered a group of women, and one day, they followed him into the fields. She first accused him of assaulting her, and then, using it as an excuse, had the women beat him black and blue.

Later, the group of disparate women decided they needed a uniform to recognise each other and feel the strength of a gang. That’s when Sampat thought of the pink saris. All other colours, she says, had been hijacked by various political parties and religious groups. And anyway, she just loves the colour pink. So it happened that when Sampat Pal slapped the policeman in 2007, the Gulabi Gang had a name and uniform in place.

Sampat Pal challenges stereotypes in a way we all love. Feminism for her is about fighting for the oppressed: women, men, even animals. A question she’s asked often when touring Europe (she’s been to France, Sweden, Italy and will visit the US this year) is related to female subjugation back home. “The subjugation is more in Europe,” she tells them, “No one listens to them (European women).” She has a point. She may not know who Dominique

Strauss Kahn is, but the audience does. “If they (women) don’t work and earn, no one will feed them. In our homes, if the woman doesn’t work, the man feeds her. If we get divorced, the men by law have to give a share.”

She then goes on to connect feminism to a greater humanism in a way convoluted theses’ and theories can’t. In Sweden, when someone asked her about the ethics behind her violence, she retorted, “If I use a stick to save a woman, what is wrong? And what about the violence in Europe? People eat chicken, mutton, cows, isn’t that violence?” When the questioner tried to explain how eating animals wasn’t illegal, Sampat got agitated. “Laws were made by humans for their own interest. Did anyone call an animal to the meeting when they were making laws? Even an ant has a soul.” One of Sampat’s election slogans names alcohol and meat as public enemies. Sampat Pal, like Mohandas Karamchand Gandhi, advocates equal rights for women, untouchables and all other human beings, considers vegetarianism a virtue, and carries a lathi with her. Only Gandhi used it as a walking stick, and Sampat Pal uses it to intimidate.

The Congress party loves her. On returning from the Turino Book Fair in Italy, she was invited by Sonia to Delhi. Sampat gifted Sonia her biography in Italian, and greeted her with ‘Ciao’, a word she had picked up in her travels. “She laughed loudly,” says Sampat, “she said ‘grazie’.” It was also Sampat Pal who highlighted the Banda rape case—a Dalit girl held captive in an MLA’s house and gangraped—before Rahul Gandhi decided to arrive on the scene and agitate against the MLA (of the rival BSP).

In India, dowry deaths, sexual violence, child marriages and female infanticide don’t raise eyebrows. The Gulabi Gang’s biggest contribution has been in making these ubiquitous narratives newsworthy. For all her fame in the West, Sampat Pal says an article in the local newspaper matters to her much more, since it could influence villagers. But the Gulabi Gang’s foreign fame could impact Sampat’s election campaign positively too. While canvassing, Geeta, a commander of the gang, jokes how a single foreign woman can bring all the men, young and old, out of their homes in an instant.

Now that Sampat is fighting for elections, she doesn’t carry her danda anymore. “Hum danda leke thodi vote mangenge. Ab to unki behen beti banke vote maangna padta hai (I’m hardly going to seek votes with a stick in my hand. I now go to them as their sisters and daughters),” she says. Men, her erstwhile targets, are her newfound supporters. Although the Gulabi Gang can only have female members, men are crucial for Sampat’s electoral campaign. For, in this part of India, it’s largely men who have the privilege of spare time and opinions. Bhagwat Diwedi is one of the many men who surround her during her daily canvassing. He gave up alcohol in order to join Sampat. When you ask him how this happened, he replies, “Bhay samajhiye, ya inke samjha ne ka dhang samajhiye (Call it fear, call it her style of persuasion).” It is true, Sampat Pal has a way with words. She is also a poet and songwriter, constantly creating catchy jingles to disseminate her message to villagers. Her latest song is a number on Daddu, her BSP opponent, the chorus for which goes, ‘Daddu ne maaro miss call/ ki Mayawati hello hello’.

Now that she’s standing for elections, Sampat Pal has reinvented herself as a law-abiding citizen fighting against poverty, unemployment, drought, and not just women’s rights. Yet, in our enthusiasm to project Sampat Pal as a saviour, we suppress complexities in the story. Sampat is a matriarch, looking after almost 14 grandchildren. Longinotto, who spent months with her, observed closely the financial strain this puts on her. “When you have no money,” says Sampat in her film, “nobody loves you.” She has led a hard life, and can see now how fame and power brings back the very people who had once abandoned you. Now that Sampat is a leader, her family looks to her for support. Politicians hope to rescue their image by wooing the righteous grassroots activist. With a Congress ticket in hand, Sampat finds herself surrounded by opportunists.

The nuances of Sampat’s story are lost in translation. The crudeness, the loneliness, the hubris of her language goes unnoticed in foreign languages. But inspiring stories cannot be complex in the way depressing stories can. Had the policeman thrashed Sampat in return when she slapped him in 2007, it wouldn’t have made news, although it would still have been heroic.