India has an estimated 24 million of them. We meet a few 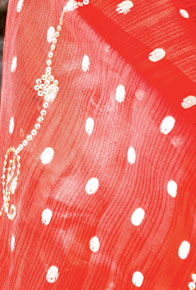 India has an estimated 24 million of them. We meet a few


She is adjusting the veil on her forehead to keep it from falling. The lipstick meant to accentuate her thin lips has been chewed off, but not for long. An older woman notices it and presses a tube to her tightly pressed lips again, hard. A dozen children at different stages of growth watch the gesture with curiosity. The girls lean forward repeatedly to touch her. She asks them to leave but they only move inches away and stand with their eyes fixed on her. She is a novelty to them. It hasn’t yet been a year since her wedding and she is the most interesting person in their lives. But she doesn’t understand it. “I hate children. Just can’t stand the thought of them,” she whispers. You can’t blame her. Priya is just 14 herself and trying to adjust to her life as a grown up.

We are sitting on a mud porch surrounded by three huts in Kheri, Uttar Pradesh. This is the home of Priya, her brothers-in-law and their families. There are two more thatched huts facing the road that belong to her father-in-law. For the next hour or so, every question directed at her is answered by a sister-in-law, all waxing eloquent about how lucky Priya is to be married into a decent family, to a loving man. From time to time, she nods in agreement, silent, compliant, smiling.

Then she spots a young man and runs into his arms in an uninhibited display of affection. With the young man, there is an older balding man to whom she nods. The young man is her 22-year-old brother Sonu. He is accompanied by her 40-year-old husband Vinay Kumar, a mechanic at a spare parts shop, who introduces himself as a 24-year-old. Priya laughs at his introduction and he slaps her. She calms down.

She understands that she is married to a man thrice her age by force of circumstance. She even understands the violence. “I always knew I was poor, but I wanted to work, save up and eventually marry later when I had learnt how to cook and clean. Right now, I don’t know anything and this makes my husband angry. He slaps me when the food is bad and I fall short on my wifely duties,” she says. “But I never cry. No matter what. The other day he hit me when I asked if I could borrow his mobile to play some songs.” One of the women in her entourage, unhappy with the revelation, nudges her, then disappears in search of something.

The latest figures from the United Nations Population Fund show that 14.2 million girl children are married off annually; that makes 39,000 daily. India is home to the world’s highest number of child brides—24 million—yet it refused to sign the first-ever global resolution on early and forced marriages of children floated by the UN Human Rights Council, which found support in 107 countries, including almost all those with high rates of child marriage.

Girls in India are married early for a variety of reasons, including poverty, lack of economic opportunities and patriarchal pressure. According to the National Family Health Survey, 58.6 per cent of these child brides are in Uttar Pradesh.

Bisni Kumari, 15, is one of them. It has now been seven months since she was married off in Kheri district. She always knew this would be her fate. “I was going to get married before the age of 16. That is what everyone does. In fact, I am one of the lucky ones. At least I married a man my age,” she says. Kumari, who is on a visit to her mother’s, is somewhat bemused at the interest in her life, which she sees as “ordinary”.

Usha Thakur is 14 and has been married six months. She too sees her wedding as fated. “I had to get married because my father has seven children and I am the second eldest. My sister is 20. Her husband left her. We have no money and my in-laws asked for no dowry. Also, we’re of the same caste. It was a dream match,” she says, sweeping her one-room home, which she has decorated with origami. She talks incessantly of how happy she is, pausing briefly to say that the only thing she doesn’t like is having to hide her playthings in a trunk. “I can’t take them out and play because all the children laugh at me and break them.”

Usha’s aspirations for her life are small. She would like to be a seamstress. “But we don’t have a machine and I’ll have children. Let’s see if he allows me,” she says, looking lovingly at her husband who is brooding in a corner because of all the attention she is getting.

“You know, he asks me to wear jeans, but how can I?” she giggles, getting up to serve him food, then sitting at the edge of a hand pump to begin washing the pile of utensils that have accumulated.

It is the day after Diwali and Priya’s brother Sonu is here to ask for permission to take her home for a day. They are obviously close and happy to be in each other’s company. Her husband grants them five minutes of privacy and Priya talks of how she is not allowed to go home often. “Even when they allow it, I am supposed to come back by the evening. It is unthinkable that I should want to spend a night at my parents’,” she says. Her brother calms her down and says this is how married women ought to behave. “Not like our mother, spending days and nights by the road, high on alcohol, not knowing what time of day it is,” he says.

Priya was born to poor alcoholic parents. “Add to this that she is a girl and her options were very limited,” says Sonu. “From the time I turned 15, I knew that it was my moral responsibility to get my sisters married and settled. First I saved up enough to get the eldest one married. Then this wonderful match came our way. It was my father who fixed it. I just got her married. I mean, where will you find a family that is willing to bear the cost of the entire wedding? They did that.”

The fact that Priya is married to an old man does not bother Sonu. He says that it’s just fate and she will have to adapt to that fact. “What else can she do?”

Priya’s mother, who wasn’t at the wedding because she was living in Mumbai at the time, was shocked when she found out that her daughter was marrying someone so old. “She told me that this was the worst thing that I could do to myself,” says Priya, “that if I had waited, she would have married me to a handsome fellow in Delhi. But she wasn’t there, was she? So what choice did I have?”

She found out about her own wedding only two days before it was to take place. At first, she refused, and then tried to throw a tantrum. “But then my father beat me up and my brother reasoned that the cards had been printed and there was no going back,” she says. Sonu adds that one of the reasons he pushed for the marriage was the fear that she would get influenced by their mother and end up with nothing: “She was starting to become just like her; spending all her time outside the home, getting up to no good. We had to take stock of the situation. Plus she has such a good home now. At least she is settled.”

A baby wails and Priya makes her way back to the porch, instinctively stepping away from her husband as she crosses him to enter her hut. It is damp and cold inside. There is a narrow bed with a baby on it on one side and a mud stove on the other. There is a lone trunk, and garish Bollywood posters line the thatched walls. Priya loves Bollywood. Shahid Kapoor is her favourite; she had hoped to marry someone like him. “And here I am stuck with an old man,” she laughs.

Finally, alone in her hut, she hangs up a linen cloth that serves as a curtain for the entrance. This is the first time she has been in her room all day because her sisters-in-law don’t take kindly to her sitting here. “They tell me I am snobbish because I want to wear salwar kameez and that I do no work, which is a lie. Not only do I clean my house, I also help with their duties. They get aggressive if I don’t cater to all their demands,” she says.

Pointing to a cheap china tea set on a shelf, she says her brother gave it to her and it’s her favourite thing to use.

She also points to a trunk and a handbag, her few possessions. “It’s all Sonu. I don’t begrudge him anything. I know he loves me and is trying to do his best,” she says. “It’s my father and sister that I despise, as they are constantly pressuring me to behave better.” Every time she refuses to do something, like sleep with her husband, he calls her father who comes down to have a chat with her. “My husband never talks to me except to ask for food. He usually just beats me and asks me to walk the line. My father and sister are the same,” she says. “I have to pretend to be happy all day. I get so bored. I am surrounded by old people and children.”

She glances at the baby on the bed, her two-month-old girl. “I feel nothing for her. I didn’t want children. Who knows, I might be pregnant with another,” she says patting the tiny swell of her belly. Can she not visit a doctor? She laughs at the question. “How will I do that? The only time I am allowed outside the house is in the morning.” She has no friends who can help, either. She used to know a few girls she played with, but they are now part of a life that is alien to her.

On her own, in a cold hut with a baby that she doesn’t quite know how to pacify or nurse, she looks helpless and frighteningly like a child for a few seconds before she collects herself. She swiftly picks up her plastic hand bag and moves toward her brother, waiting outside, when she realises that she must take the baby too. Almost as an afterthought, she stops, goes to her trunk and picks out an ostentatious faux silver belt. “Can you help me with this?” she asks. “Now that I am going home, I might as well look prosperous and happy.”