Faizan Bashir’s case is not an isolated one. The arrest of minors in Kashmir is turning into a serious issue 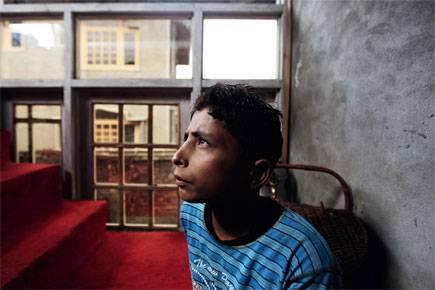 Faizan Bashir’s case is not an isolated one. The arrest of minors in Kashmir is turning into a serious issue


There is a word in Kashmiri: Dam Fue’t. Dumbstruck. It describes Faizan Bashir’s current state well. He sits wilted in a corner, legs turned inward, foetus-like. He has been brought surreptitiously to a relative’s house in downtown Srinagar. His family is in hiding. The police are looking for his father. “They want to punish him for a small mistake committed in innocence by his son,”says Faizan’s uncle.

Twelve-year-old Faizan Bashir lives in old Srinagar. Till 19 August, the day before Eid, he used to attend school. He was only in class six. On the morning of Eid, Faizan accompanied his father to the local mosque to say his prayers. Afterwards, his father gave him some money as Eidi, and the kid ventured out to play with his friends. The authorities already had intimation of a massive protest in the area. It is a regular phenomenon in Kashmir valley—after prayers, especially on Fridays, youngsters come out and pelt stones at the police or paramilitary forces. It happened that day as well. The crowd was protesting against the house arrest of separatist leaders.

Despite prior warning, a police armoured jeep of the nearby Qamarwari police station took the road next to the Eidgah. According to sources, even police personnel from Safakadal (the riot area) police station were surprised that the vehicle should pass through this area since the police tend to avoid such encounters. Predictably, the police jeep came under heavy stone pelting from protestors. Faizan came across a few of them. “They told me to throw stones at the vehicle; they said it belonged to thieves,” says Faizan. He picked up a stone from many strewn on the road and threw it at the vehicle.

Unknown to him, a boy in the crowd shot a picture of him in action, hands raised to throw. In downtown Srinagar, sources say, hundreds of boys have been kept on payroll by the police to point out stone-pelters (or, as happened in Faizan’s case, click their photos).

A week later, policemen arrived at the doorstep of the Bashir household and asked for Faizan. The next morning, he was asked to appear at the police station. On his arrival, Faizan was arrested, on various charges including ‘attempt to murder’. He had to spend the night in the lockup. “They were abusive, though I was not beaten up,” says Faizan.

The next morning, Faizan was taken to court. “The police did not want to reveal that he was a minor,” says Faizan’s advocate, Babar Jan Qadri. It was because of Qadri that mediapersons could take a photo of the young boy at the court. The court remanded Faizan to police custody for 15 days. He was taken to a juvenile home at Harwan. “I felt safer at the police station than in that home,” recalls Faizan. Inside the home, he was kept with three older boys, arrested on charges of pickpocketing. “There was no light inside and I felt very scared in the darkness,” says Faizan.

Following a media outcry, Faizan was released on bail the next day. But many say the arrest of minors such as Faizan on petty charges has become a dangerous trend. “Is there no better way of handling such cases?” asks Faizan’s uncle.

Qadri claims that in some cases the police torture teenage boys caught under such circumstances. “Mice are put in their trousers fastened at both ends, and they are injected with petrol,” he claims.

According to information obtained by Qadri in 2011, through the Right to Information Act, 34 minors arrested are still in jails or juvenile homes. And their number is increasing. India’s Juvenile Justice (Care and Protection of Children) Act, 2000, clearly demands that the State ensure the ‘proper care, protection and treatment by catering to their development needs, and by adopting a child-friendly approach in the adjudication and disposition of matters in the best interest of children and for their ultimate rehabilitation through various institutions established under this enactment.’ But in Kashmir, the government has not even set up a juvenile justice board, as a result of which minors like Faizan are often left to the mercy of the police. On top of that, the J&K Juvenile Justice Act describes a minor as someone who is under 16 years of age as opposed to 18 years as applicable in the rest of India.

“Now what kind of example are [the police] trying to set?” asks Qadri. “If they are keeping teenagers on their payroll, what is the guarantee that tomorrow these teenagers won’t succumb to a better offer from a militant outfit?” Qadri has had a few close encounters with police high-handedness. In 2010, he had gone to a police station in Ganderbal (Chief Minister Omar Abdullah’s constituency) to enquire about a person who was under arrest. The station in-charge got so angry at this that Qadri was hung with a rope and beaten up. He suffered serious injuries, and was left bleeding from his nose and mouth. “Imagine, I had just gone there to ask the in-charge about an arrested person and he could not tolerate my asking him questions. They almost killed me,” Qadri says.

Faizan’s father, Bashir Sofi, is a former militant. After distancing himself from militancy, which left him crippled, Sofi had been trying to make a living off a stall of second-hand clothes. After Faizan’s arrest, he has gone into hiding. His family members have taken refuge separately with other relatives. The sequence of events has forced Faizan to leave school. “[Sofi] has nothing to do with militancy now,” says his brother. “Now, if you don’t allow him to earn and feed his family, where will he go?”