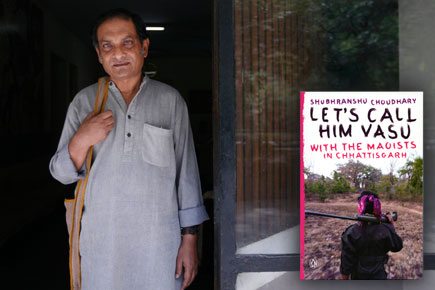 
Journalist SHUBHRANSHU CHOUDHARY’s book on Indian Maoists, Let’s Call Him Vasu has whipped up a storm even before its release, scheduled on 19 December. Right at the beginning of the book, Shubhranshu describes a meeting with a Maoist courier, Anil, at Delhi’s IT hub Nehru Place. Anil surprises Shubhranshu by telling him that Binayak Sen had indeed helped courier messages for a party leader. (Binayak Sen was arrested in Chhattisgarh in 2007 for his alleged links with Maoists and was granted bail by the Supreme Court last year). This ‘revelation’ has left many angry, and on social media, Choudhary has been accused of “playing a pawn” in the hands of the State. Maoist ideologue Varavara Rao, scheduled to be among the panelists at the launch event, has withdrawn his name. At the time of going to press, Binayak Sen had not responded to Open’s questions to him on the allegations in the book. Excerpts.

Anil did not appear to be in a hurry, and I found myself drawn into the conversation. We ordered some masala dosa and idli.

‘Is this a tag from IndiGo airlines?’ I asked, pointing to his bag.

‘Yes. I got delayed contacting you because I had to finish some work in the interiors and then catch a flight to Delhi.’ He sounded apologetic.

Anil continued, ‘Once I reached Raipur, however, my contact dropped me off in a remote Adivasi village instead of the refugee settlement. Comrade Kosa, who received me, had to leave on some urgent work right away. He promised to be back soon. You know Kosa is the secretary and heads what our Party calls the “Dandakaranya State”.’ Anil smiled at the memory as he dug into his idli.

‘Kosa did not return for ten days. I would watch the villagers’ farm and do their household chores and curse myself. I could not even speak to them as we did not know each other’s language. No one there spoke Hindi either. I felt that I must have been insane to believe that a revolution could happen from there. It was as if we were in the fifteenth century! The people were primitive and not conscious of their lot—I wondered why I was wasting my time there.’

‘And you are still there. Why are you still wasting your time?’ I asked him, trying to gauge how he would handle tougher questions.

‘I know the revolution will not begin in my lifetime. But I cannot think of anything better to do. I know this is the right path and that I should make my contribution to build a better world for the future. Dandakaranya is a different world… very isolated …and for generations, all that people have been exposed to is the Party. Just as people in the cities dream of becoming Amitabh Bachchan, children in Dandakaranya want to take up arms and join the Party.’

‘I want to meet Comrade Kosa,’ I told Anil. ‘I have heard from Vasu that he is the only one left on the ground from the first batch that was dispatched to Dandakaranya in 1980 to develop the area.’

‘Well, I have heard of the seven batches of seven members each that were sent out by Kondapalli Sitaramaiyyah, our leader, popularly called KS, but I am not sure if Kosa is the only survivor.’

I pressed on. ‘Kosa would be able to recount everything that has transpired in central India in the last thirty years. I need him to tell the whole story. Also, I want to find Vasu, if he is still alive.’

Anil did not know anyone by that name, but promised to check for people matching the description I gave him. I was counting on Vasu’s having acquired a new name. I felt the ice between Anil and me had thawed well enough, and decided it was time to push him a bit.

‘Too much philosophy. Can we talk of some real situations? Maybe you can tell me about the Binayak Sen case.’

Social activist Dr Binayak Sen had been arrested for an alleged link with Maoists. At the time when my conversation with Anil took place, there was an extensive campaign to secure his release, with even some Nobel laureates joining in, writing to the prime minister pressing for his release.

‘Did he really help courier messages for you?’ I asked, not expecting any response. To my surprise, Anil answered with alacrity. ‘Oh yes, of course.’

I did not believe Anil was aware of the facts, so I asked him, ‘And what about Piyush Guha, who has been arrested for being Dr Sen’s conduit?’

‘Piyush was a courier for our leader Narayan Sanyal, just as I am a courier for Prashant. Dr Sen used to meet Narayanda in Raipur jail. Narayanda was one of the leaders who moved to Bihar after the Party was disbanded in 1972. He was the founding member of the Communist Party of India (Marxist-Leninist) Party Unity, one of the many factions our leaders formed.’

‘Oh yes, there were a lot of factions. I counted up to thirty-two—some were parties with single-digit members,’ I interjected.

‘Yes, that is a big problem,’ Anil said with a smile to acknowledge the dig. ‘We had so many parties, almost equal to the number of leaders. Slowly, they have started to come together now. Narayanda’s Party Unity merged with my Party, CPI (ML) People’s War, in 1998. Piyush was a full-time member of Party Unity. Later he became a part-timer, but he always worked harder than full-timers. Narayanda set up a business for Piyush as a tendu leaf contractor as a cover for his work as a courier.

‘When Narayanda needed funds for his legal expenses after his arrest, Piyush collected Rs 50,000 from Sabyasachi Panda, the Orissa secretary of the Party, and went to deliver the money to Binayak Sen in Raipur. He spoke to Binayakda over the phone—I think the phone was tapped. The police picked Piyush up from the hotel at which he was staying. By the time Dr Sen and Mrs Sen reached the hotel, Piyush was gone. The hotel manager denied that anyone by the name of Piyush had stayed there.

‘After that incident, Binayakda happened to go to Kolkata on work. When we did not hear from Piyush for a few days, we got worried. I went to meet Binayakda at his mother’s house in Kalyani and asked him to go back to Raipur to look for Piyush. He agreed. That is the story of my first meeting with Binayakda.’

It was an interesting angle, but I could hardly put it down in writing without confirmation from other sources. At a later date, I had the opportunity to meet Sabyasachi Panda, then head of the Maoists in Orissa. I asked him why he had sent Rs 50,000 to Dr Sen. Perhaps I caught him by surprise with the way I framed the question, or perhaps he assumed I was privy to that information. Whatever his reason, he acknowledged having lent the money to Piyush for Narayan Sanyal. I asked him if he ever got the money back. Piyush had been arrested before he could deliver or return the money, he replied. He also said he had apprised the Party’s Central Committee of the course of events.

Later, when I contacted Dr Binayak Sen for his version of the story, his lawyer called back to say, ‘All this is hearsay and has no truth in it.’

(With permission from Penguin Books India)