They talk development on college campuses 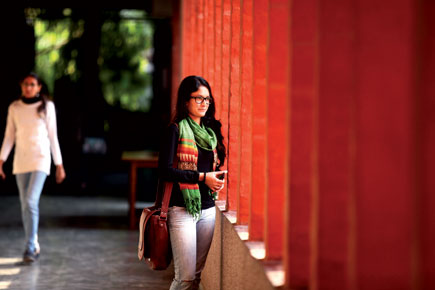 They talk development on college campuses

Pranav Gupta, a third-year student of economics at St Stephen’s College, has been keeping busy. Not so much with his books and classes in college, but attending every political rally held in the capital over the past two months. “I have been to Rahul Gandhi’s rally, and Kejriwal’s junta durbar,” says the 20-year-old, with the excitement of a tourist recounting his itinerary. The next destination on his list is Rohini in north- west Delhi where the BJP’s Narendra Modi is expected to address a rally this month. The agenda is to keep oneself informed before making a decision to vote, says the Noida resident.

“You should feel the excitement and buzz of such events. That is the purpose of an election rally. Television discussions are noisy but I really enjoy rallies as you can see the leader upfront, and gauge his capability,” says Gupta, who hops on to the Metro or a DTC bus to get to these political events. Be it Kejriwal’s 49-day stint as Chief Minister of Delhi, or the image war between Rahul Gandhi and Narendra Modi, Gupta likes to have an opinion. “I am a student of economics, but somehow politics interests me—an interest in politics is also as important as economics for nation building and I am looking forward to vote this time,” he says.

Gupta is among those citizens who expect to lose their ‘ballot-virginity’—as it is known on campus these days—this year. According to figures released by the Election Commission recently, there will be over 100 million Indians eligible to vote for the very first time this year. It is a number no political party can afford to ignore, and all major parties have pumped resources into image- building exercises, even stunts, to woo the youth.

These young minds, however, do seem to have their minds and hearts set on governance and efficiency in running the country when it comes to choosing a candidate to elect. While Gupta is enamoured of political figures who can attract crowds to their speeches and public rallies with their “stardom”, he insists on an assurance of efficient governance and honesty.

Moses Koul, his classmate, has been reading the political manifestos of most parties, “studying” their economic policies. “Arvind Kejriwal wasn’t too bad for starters, but after he stepped down, I think it is all a joke,” says the 22-year-old, who is now considering voting for the Congress as is tradition in his family, he says. While most of his friends were impressed with the Anna Hazare movement, and the anti-graft dharnas that followed on and off campus, Koul feels that the movement was a long street party. “I do not want to sound pretentious, but most candle-light vigils and protest marches are a farce,” he says.

Second-year student Atreyi Bhattacharya, who is planning to make a trip to her hometown Dehradun, to cast her vote for the first time, however, believes in marches and protests. Looking at voting for a party that will support LGBT rights, Bhattacharya has been a regular at gay pride parades and protests organised against Section 377. “Protest marches might be mere street parties, but at least they are fun and still hold some significance,” she says. While many members of her family have joined AAP back home in Dehradun, Bhattacharya is still to make up her mind on whom to vote for.

Nineteen-year-old Lavanya Garg, a student of history at Lady Shri Ram College, is also unsure. “I wish we had more parties. I don’t want corruption, but definitely our country should look to progress. I am not sure if I want a right-wing party like the BJP to come to power, but Narendra Modi promises development,” she says.

Devika Chaturvedi, a student of Hansraj College, however, fumbles for words when asked what she expects of the new government. Impressed by the way her new voter’s ID card landed at her doorstep right after her nineteenth birthday, Chaturvedi is looking for a party that values human life. “The Congress was all about corruption while the BJP promises growth with a top- down approach. I am not sure I want either. I want a party that looks at economic growth for its people—not using its people for economic growth,” says the second-year economics student.