At Last, a Credible Deterrent

With the successful test launch of Agni-V, India will acquire its first credible nuclear deterrent. 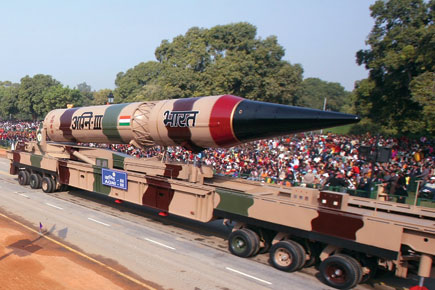 With the successful test launch of Agni-V, India will acquire its first credible nuclear deterrent.


The forthcoming launch of Agni-V, with a range of 5,000 km, has several strategic implications. The missile puts India in a select club of nations that possess a strategic arsenal. This would mean an ability to launch intercontinental ballistic missiles (ICBMs). Technically, for such a capability, India would need a missile with a reach of 5,500 km. However, upgrading the range of an ICBM from the current 5,000 km is not a difficult task.

Besides, even with its existing range, many important strategic assets in China would be within the missile’s target range. The upcoming test is critical to securing India’s strategic space, given that Sino-Indian relations are still volatile and the Chinese have gone into armament overdrive, with new ballistic missiles such as the DF31 ICBM.

Agni-V is not only capable of hitting major targets in China, it is also likely to be India’s first missile with multiple, independently targeted re-entry vehicles. This means the capability to launch up to 10 nuclear weapons from one missile. This acts as a tremendous force multiplier, and is the backbone of deterrence worldwide.

Agni-V is a three-stage, solid-fuelled missile with composite motor-casing in the third stage. Two stages of this missile are constructed of composite materials, which help in reducing weight while increasing the range.

The other major advantage of this new missile is that unlike Agni-III, it can be packed into a canister and transported over long distances. With mobility come two key deterrent advantages. One, it can be moved to the frontlines in a relatively short time. The second advantage is that canistered missiles make for great decoys. Finding out which canister in which train has a missile, and which is a dummy, is fiendishly difficult. This forces the enemy to deploy greater resources (in surveillance and missile capability) to track and destroy Indian missiles.

The Chinese have taken note of the proposed test and their state-run media have already run comparisons with the Chinese DF31, one version of which has a range of 11,000 km.

The success of India’s missile programme is amazing when you compare it with other projects of the DRDO, most of which have been miserable failures.

The reason for the missile programme’s success lies in its originality. A programme built from scratch, it is not aimed at import substitution. This allows for creativity in thinking and implementation. What’s more, the programme has been focused on a few projects, unlike sundry other DRDO initiatives aimed at making fighter jets, tanks and even fruit juice. Lastly, in the initial stages of India’s Integrated Missile Development Programme, the Russians had been very helpful with designs, technology and scientists on site.

Agni-V is not the only achievement of our missile scientists. India has steadily improved upon its anti-ballistic missile capability. In this field, the nation has an edge over China. Over the past three years—that is, ever since our first anti-ballistic missile test—India has had three successes in three tests. This has, surprisingly, not received its due media coverage, given that it is, by any standards, a remarkable achievement. Shooting a missile mid-air requires computation power, technical sophistication and theatre information dominance. It also credibly boosts India’s deterrence posture since the enemy would have to deploy more missiles than would be the case were India not to have anti-ballistic missile capability.

Besides Agni, the most important missile to be tested this year will be K15, which has a range of 700 km. A different version of the same missile was tested from a submerged pontoon last year. K15 will give India a critical third element of the nuclear triad—the ability to fire from an underwater submarine. While China with its Jin-class submarines is way ahead here, this capability will complete the first step of India’s nuclear triad.

For way too long, India has been surrounded by nations with the capability to annihilate. At long last, Armageddon with an Indian address is at hand.