Should the Army take on the Centre’s battle against Maoists? The Home and Defence ministries are at odds over the question. Here’s the state of the battle within. 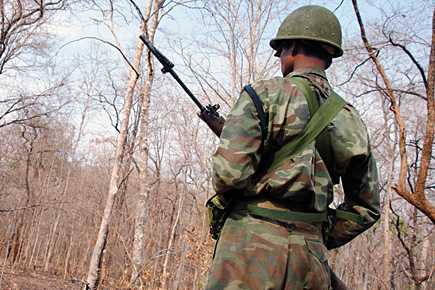 Should the Army take on the battle against Maoists? The Home and Defence ministries are at odds over the question. Here’s the state of the battle within.


A field report from Goaltore quotes West Midnapore’s district Superintendent Manoj Verma, describing how in just five days—since he left counter-insurgency operations in Jammu & Kashmir and moved to Lalgarh in West Bengal—CRPF Deputy Commandant Vijay Pal Singh “was learning fast”. His experience in Kashmir, Singh had thought, equipped him well to take on Maoists. But then, they struck, and he along with four of his men became the first set of CRPF personnel to be killed by Maoists in West Bengal. A sixth was badly injured.

Singh had set out early in his Bolero on the morning of 19 May to visit the area’s CRPF camps at Ramgarh and Kadashole. He left the first camp a little after 11 am. Valley-hardened, Singh made a grave error, one made by the commander of the 76 massacre victims of Dantewada. He chose the same return route.

The road ran along the thick Chowkisal forest. It was too early for Maoists to have picked up his trail, he perhaps surmised—to his doom. At about 11.30 am, a powerful blast blew up his Bolero jeep, some 3 km away from Kadashole. The jeep, with the mine exploding right under it, was hurled 15 metres off, crumpled like a ball of paper. There was only one survivor.

Operation Green Hunt, the Centre’s battle against Maoists, has led CRPF personnel to discover that J&K and the Maoist belt are vastly different theatres, and that assisting the Army in J&K counter insurgency operations cannot quite prepare you to lead the charge against Maoist guerillas in the jungles of East, Central or South India.

“This doesn’t happen in Kashmir,” says an officer serving in the Valley, “The Army dominates the area. Once a road opening party clears the way in the morning, we maintain a vigil, and the road remains secure for troop or civilian movement.” There is Army presence every few metres in the Valley, supplemented by BSF and CRPF men. The Indian Army has more than 70,000 troops of the Rashtriya Rifles alone stationed in the Valley, which runs less than 150 km by 30 km. Also, despite the hostility, the Army has put together a network of informers over the years in J&K. By contrast, the Maoist jungles are vast (ten times the size), the terrain totally unfamiliar, the paramilitary headcount only about the same, and sources of information scarce.

The Army just doesn’t have the numbers needed (roughly 70,000 more soldiers) for the new battle. Then, there is the matter of legal authority. In the Northeast and J&K, it is armed with special provisions of the Armed Forces Special Powers Act (AFPSA) that let it search, arrest and detain people with ease. Given the risk of human rights violations, reports of which surface periodically from both the Valley and Northeast, the Government will not find it easy to forge a political consensus on applying the same tough rules to Maoist-effected parts of India. This, say some, gives Maoists an edge.

And that is precisely why the ministries of Defence and Home Affairs are engaged in a reverse turf battle: each wants the other to tackle the problem. A plan drawn up by the Home Ministry for consideration of the Cabinet Committee for Security envisages a larger role for the defence forces: Army on the ground, backed by Air Force cover for troop/supply movements. The proposal was put to Defence Minister AK Antony, who managed to ensure that a high-level committee chaired by Prime Minister Manmohan Singh focused on augmenting the paramilitary forces instead of pressing the Army and Air Force into battle. This has left Home Minister P Chidambaram miffed, it seems, and sources indicate that the PM has asked Finance Minister Pranab Mukherjee to mediate between the two ministers.

The Defence establishment is clear that even peripheral involvement with anti-Maoist operations at this juncture could suck the armed forces into an escalating war from which withdrawal would be difficult. “The Army will be forced to hit back hard if there are casualties. Do we want to give the impression that a civil war has started to the outside world?” asks an officer at the Army headquarters in New Delhi, across the road from the Home Minister’s office. The Army, he says, is the brahmastra, the weapon of last resort in Hindu mythology. “It is our defence against external aggression,” he adds, “What message do we send if it starts fighting Maoist guerillas in the forests; have we exhausted all other options?”

Also, the Army is already stretched in J&K and the Northeast, and has two hostile borders to defend if need be. The Subcontinent’s military equilibrium could be disturbed if the Army is redeployed, argues a serving general. Pakistan’s internal strife needs to be kept from spilling over into India, and defence preparedness is critical to this. “The moment our resources are diverted to this fight, which could last decades, Pakistan will try some mischief,” he cautions.

Reluctant to go into direct combat against Maoists, the Army would prefer an advisory role. Since 2006, it has trained 47,000 personnel of central police organisations (CPOs), including 26 CRPF battalions, at its counter insurgency school in Warangte, Mizoram, and at Corps training schools. Training programmes have also been organised at the regimental centres of the Indian Army for paramilitary personnel.

“We also send training teams to CPO establishments for training,” says a colonel. There is a five-week basic training course for an entire sub-unit so it can function as a cohesive combat unit. Training modules include counter-Maoist guerilla warfare and bomb defusal. The Army Medical Corps have also trained paramilitary units in paramedic and first aid. But the Home Ministry plan envisages a Unified Area Command in the Red Corridor under the charge of a major general. The Air Force, which has already provided four Mi-17 helicopters for moving supplies and troops, neither wants to spare more choppers nor enter the conflict zone.

However, many believe that what we are witnessing is a reactionary cycle. Maoists reacted to Chidambaram’s declaration of a full blown war against them by inflicting heavy civilian and police casualties in a renewed burst of violence. And then the minister responded by knocking on the Army’s door. Mutual provocation will not help, these observers believe. What’s needed is some cool headed thinking. “The Army should not be sucked in. Keeping it out is the right decision,” says Prakash Singh, anti-Naxal expert and former chief of the BSF.

“Just because there have been some reverses, it doesn’t mean that we lose confidence in the CRPF,” says Singh, “When a force enters a new area, there are problems. When the Army went to Nagaland, their troops too were ambushed. But, they got back, understood the tactics, and got on top of the situation.” He contends that the CRPF needs better training and equipment. “But they are best suited to carry these operations.”

As Open goes to press, there are reports from West Midnapore that the CRPF has struck in a place called Ranja forest near Lalgarh. They have killed eight Maoists guerillas in an encounter, and suffered no casualties.

Singh could well be right. Casualties in battle are a part of learning.