AIMA for a New India

The Association's National Leadership Conclave: A platform for purposeful dialogue 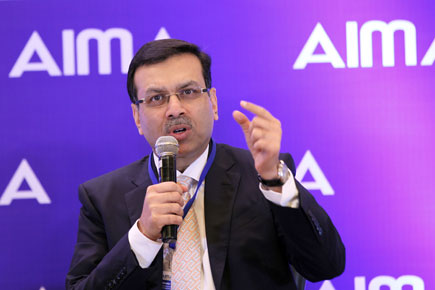 India, many believe, is at the precipice of change. People have expectations, from the Government and from Indian industry, which in turn have expectations from each other. There are several challenges and shortcomings that we as a country need to overcome, say big-picture analyst, in order to reach where we believe we ought to be.

The two-day National Leadership Conclave organised by the All India Management Association (AIMA) was led by the theme From Agenda to Action: Meeting New Expectations. The idea behind the conclave was to discuss issues that the industry and Government face, and determine the best ways possible to try adressing them. The mandate of the Conclave was to create a dialogue that would help the country turn more productive.

HM Nerurkar, President, AIMA and Chairman, TRL Krosaki Refractories Ltd, said, “Change is achieved through great implementation, not great ideas.” Perhaps that should be the guiding light for any public-private partnership. If we’re enthusiastic enough, he added, we can make change happen.

Sanjiv Goenka, Chairman of the Conclave and Chairman, RP-Sanjiv Goenka Group, elaborated on the idea of the Conclave, which was to “create opportunities to have purposeful dialogue, with a fresh approach”. He spoke about the excitement and the expectations that industry has of the Government, and how it’s important to tap the opportunities that exist, with India now enjoying a changed image in the world. “Initiatives like Make in India, Swachh Bharat, Digital India are revolutions. It’s a great beginning. As a nation, we must create an environment and mood that helps build a new India, and encourages ease of doing business,” he said.

This could be India’s decade, what with a positive outlook towards industry, a better credit rating, a renewed belief in our country. As Sunil Kant Munjal of the Hero Group said, “There is no lack of tools, but we need to ensure that the leadership is equipped and doing what needs to be done. The Prime Minister has set the tone. It’s about time we turned what we crib about into missions.”

Speakers, including policy makers, experts and leaders of industry, spoke about various shortcomings that sometimes hamper their growth, but also how best the country could address these issues. Rajiv Bajaj, Managing Director, Bajaj Auto Ltd, in the session Creating A World Class Ecosystem: Can India Make It, spoke about the glory days of ‘Hamara Bajaj’, and how his company went from a period of “one and a half years waiting for a scooter, to nobody buying it”. It was heartening to learn of his struggles, where he spoke of how it’s important to keep one’s competition in mind. “India has to adapt if it has to move ahead,” he said.

It was encouraging to hear Aditya Ghosh, President, IndiGo and InterGlobe Aviation, speak of how opportunity is staring at us, and how it’s important to adapt ‘Make in India’ for the world as well as for India. “We should recognise and incentivise opportunities in India. We need to move from a culture of barricades to that of incentives,” Ghosh said. Everyone is looking for an opportunity, but if there’s an incentive attached, perhaps many more people will help create those opportunities as well. He also drew attention to how people are paranoid about celebrating success, which is something we ought to do unabashedly.

Speaking on the topic Power to the People: Multiplying India’s Productivity, which focused on how power is critical for realising India’s full potential,  Goenka said, “Power and fuel management is complex. We need to balance profitability and power tariffs for the public.” The panellists, which included Arup Roy Choudhury, Chairman and Managing Director, NTPC Ltd, and Devansh Jain, Executive Director, Inox Wind Ltd, spoke about how there needs to be clarity and perhaps also stability of policy in order to encourage private sector participation. It’s important that we focus on our own efficiency, he added, not on someone else’s inefficiency.

With India’s prospects looking bright, industry, Government and society have to work in tandem to implement changes, as it was clear. That’s the only way we can forge ahead as a country.