Will revoking this Act in Kashmir change things drastically? Or does the problem lie elsewhere? 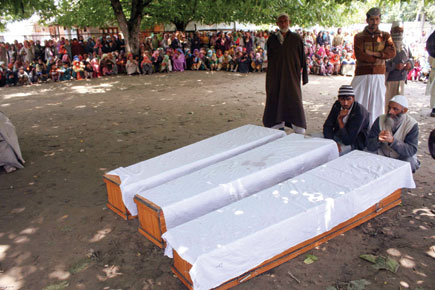 Will revoking this Act in Kashmir change things drastically? Or does the problem lie elsewhere?


DELHI ~ The symbolism of the day could not have been better. At a Police Commemoration Day function in Kashmir, on 21 October, Chief Minister Omar Abdullah had an important announcement to make. The Armed Forces Special Powers Act (AFSPA), which had been one of the biggest contributors to the trust deficit between New Delhi and Kashmiris, would be revoked from some areas. Choosing not to name these areas, Omar Abdullah went on to say that the time had come to share the dividends of peace with ordinary people. The police were capable of handling any situation on their own, the Chief Minister added.

It made perfect sense—except that Omar now says that he had announced his intention, not decision. This summer was the best season Kashmir had experienced in the last two decades. About 1 million tourists had visited the Valley, and no major ugly incident had taken place. And yet, the reactions that Omar’s announcement evoked were on predictable lines. The Army’s top commander in Kashmir, Lieutenant General SA Hasnain said that deliberations on the Act’s revocation were still going on. Daggers were drawn immediately, some from unlikely quarters. Even the ruling National Conference’s coalition partner in J&K, the Congress, did not agree with Omar Abdullah’s view on the AFSPA. The state Congress chief Saifuddin Soz complained that a coalition consensus was not sought before the CM went ahead with his announcement. Within days, the Valley witnessed multiple hand grenade attacks. Fingers were pointed at the Army by a senior functionary of the NC.

Respite, in some sense, finally came ten days later from the Union Home Minister P Chidambaram, who said that there was nothing “unusual” in what Omar had said about expediting the revocation of the Act. He also said that the move had already been recommended by the Cabinet Committee on Security (CCS) in September 2010 as part of an eight-point formula to restore normalcy in the Valley after last year’s unrest, in which more than 100 people lost their lives.

So, will lifting the Act change things in Kashmir? While its revocation in some parts of the state may indeed help, activists in Kashmir believe that the AFSPA—and by extension, Army—is just one aspect of a larger problem. “Let’s face it—it is made out to be as if the Army is the only perpetrator of human rights abuses in Kashmir,” says human rights activist Khurram Parvez. “That’s not true. The biggest problem in Kashmir is the culture of political impunity,” he says.

Parvez’s words deserve some thought. In July this year, after accusations against Army personnel surfaced in an alleged case of rape in south Kashmir, Omar Abdullah tweeted: ‘Guilty won’t be spared, either AFSPA or no AFSPA’. And yet, in the case of the alleged custodial death of NC activist Haji Syed Mohammed Yusuf, in which his family members allege Omar’s role, not even a First Information Report (FIR) has been filed so far. The only case filed is of fraud and cheating against the deceased. “If this is how a high-profile case involving the Chief Minister himself is handled, you can well imagine what happens to other cases,” says Parvez.

Sources say the Army is peeved because it believes it is being made a scapegoat. “The Army came into Kashmir on the call of political leaders at a time when the situation in the Valley had spiralled out of control,” says a senior Army officer. “And now, when the situation is more or less normal, suddenly the Army has turned out to be this villain.”

On its part, the Army has been fighting all attempts to revoke the AFSPA tooth and nail. The former GOC-in-C, Northern Command, Lieutenant General BS Jaswal even likened the Act to a holy scripture: “The provisions of AFSPA are very pious to me, and I think to the entire Indian Army. We have religious books; there are certain guidelines which are given there, but all members of the religion do not follow it, they break it also … does it imply that you remove the religious book …?”

So, AFSPA or no AFSPA, as Omar Abdullah put it, will those guilty of human rights abuses in Kashmir be punished? It looks unlikely, and therein lies the crux of the problem. Nobody, right from the Central to the state government, is serious about bringing the guilty to justice. In the past 22 years of turmoil in Kashmir, thousands of cases of human rights violations have been reported. There are about 8,000 people who are missing. And yet, as an application under the Right to Information Act filed by the Jammu Kashmir Coalition of Civil Society (JKCCS) in September this year revealed, the State Home Department has so far applied for sanctions to prosecute only 50. Of these, 31 pertain to the Army, while 19 others involving paramilitary forces have been sent to the Ministry of Home Affairs. And of the 50 cases, 26 have been declined a go-ahead for prosecution. In a bizarre statement, the State Home Department says that sanctions have been ‘recommended’ in eight cases. What exactly it means by ‘recommended’, however, is unclear. If only eight cases have been recommended for prosecution, what about the other 42?

In an affidavit submitted by the Joint Secretary, Ministry of Defence, in June 2009, there is not even one case where a sanction under AFSPA has been granted for prosecution. One of the starkest cases is the 2000 Pathribal fake encounter case. In May 2000, a so-called joint operation conducted by the police and the Army’s Rashtriya Rifles claimed to have killed five Lashkar terrorists. Later, they turned out to be innocent civilians. The CBI, which handled the case, took four years to establish that the five men were indeed civilians. In 2006, it filed a chargesheet against five Army personnel, including a brigadier. While a senior superintendent of police and his deputy have been in prison since 2007 in this case, the Army has sought protection for its men under the AFSPA. Had New Delhi been serious about winning the hearts and minds of Kashmiris, it would have made eminent sense to have allowed the prosecution of the five Army personnel accused of this blatant violation of human rights. Sources, however, say that even the case against the accused police officers is moving at a disappointingly slow pace. In another case, of the killing of human rights activist Jalil Andrabi, the State Home Department has said that it awaits the prosecution of the proclaimed offender, Major Avtar Singh of the Army; but the Union Defence Ministry claims that the Centre has not received the case.

The problem, activists say, is that the state government lacks the moral courage to take New Delhi head on. It puts no pressure on the Centre to prosecute security personnel guilty of violations of human rights. The activists say AFSPA or no AFSPA, it is this culture of impunity that needs to change. So too the State’s reluctance to act. In the 2009 Shopian alleged rape case that plunged Kashmir into chaos, an FIR was filed only seven days later. The police, who are not shielded by the AFSPA, often get away with human rights violations as well.

In the peak days of militancy, hundreds of renegade militants, known in Kashmir as Ikhwanis, were found guilty of human rights abuses. But no significant action was taken against them. In the initial days of militancy in 1989-90, hundreds of Kashmiri Pandits—a minority in J&K—were killed by militants. And yet, the guilty have not been convicted in any of these cases (except the killing of human rights activist HN Wanchoo). “Look at Bitta Karate, he is roaming free,” Khurram Parvez points out. Farooq Ahmed Dar alias Bitta Karate was with the militant group JKLF, and is accused of killing more than 20 Kashmiri Pandits. In a TV interview, he had confessed to these killings. But in 2007, he was let off since the state could produce no concrete evidence against him, a fact voiced even by the judge who released him on bail. The judge remarked: “The court is aware of the fact that the allegations levelled against the accused are of a serious nature and carry a punishment of death sentence or life imprisonment, but the fact is that the prosecution has shown total disinterest in arguing the case, which is in complete violation of Article 21 of the Constitution.”

In July 2007, a young Kashmiri activist filed an RTI application with the Ministry of Home Affairs, seeking information on Bitta Karate. Among other queries, the application sought answers to the following questions:

» What is the total number of cases registered against Dar?

» Is the bail granted to Dar of any specified time frame or is it indefinite?

» What action has been taken against the State Police for what the designated judge ND Wani called “total disinterest in arguing the case”?

The Omar Abdullah government’s real test, however, might lie in a recent significant development in another case that received very little media attention. The State Human Rights Commission has recommended the reopening of the 1991 Kunan Poshpora alleged mass rape case, terming as ‘shabby’ the investigations conducted so far in this case. Holding the then Director General of Police responsible for the laxity, the judgment remarked: ‘The investigation has been hijacked half way in order to favour the perpetrators of the crime.’

Till the Chief Minister does not display a real sense of urgency in the facilitation of justice in such cases that continue to smoulder in public consciousness, his AFSPA noises will be seen by Kashmiris as just that: noises.