CPM general secretary Prakash Karat’s hold on his party is getting feebler by the day. His peace overtures at the recent Central Committee meeting in Hyderabad notwithstanding 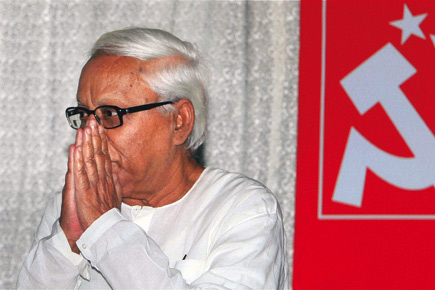 CPM general secretary Prakash Karat’s hold on his party is getting feebler by the day. His peace overtures at the recent Central Committee meeting in Hyderabad notwithstanding


The fight is over, and both sides have won. Or so Prakash Karat claimed at the end of the Central Committee (CC) meet of the Communist Party of India-Marxist (CPM) held on 11-12 June in Hyderabad. But his claim of a reconciliation between him and the party’s West Bengal chief Buddhadeb Bhattacharjee rang hollow in the light of not one, but three events of note that took place in defiance of CPM General Secretary Karat’s will.

The first was that Buddhadeb, who is fit enough to turn up every day at the state party office on Alimuddin Street in Kolkata, where he spends hours talking to local leaders and cadre, cited health reasons to skip the CC meet that was called primarily to dissect the Left Front’s colossal defeat in West Bengal recently. And the second was that the Bengal CPM lobby’s demand that the state’s loss could not be reviewed in isolation, but must be seen as a part of the party’s political failures at the central level, carried the day—despite Karat’s opposition to this point (and Buddhadeb’s absence). The third, and perhaps most damaging for Karat, was that the Bengal lobby prevailed upon the party, much against its top leader’s will, to ensure that Kolkata will be the next venue of the CC meeting to debate the final review report on the loss of its West Bengal bastion.

“Karat did not like the idea at all. He was forced to agree, as there was no way out,” a senior CPM leader told Open on condition of anonymity, “The date for the next CC will be decided later by the Politburo.”

Buddhadeb’s absence also made Karat’s reconciliatory claims—delivered through measured words while addressing the media—sound unconvincing. “Leadership issues in our party are not decided on the basis of electoral outcomes,” said Karat, when asked whether the Bengal loss would lead to changes in the central and state leadership of the CPM, “It never happens in a communist party. Leadership issues are decided on the basis of the political line we pursue and various other factors.”

To underline his point, the CPM general secretary hit out at Forward Bloc leader Debabrata Biswas, who had recently threatened to quit the Left Front in West Bengal if Buddhadeb was not ejected from the leadership of the state party. “I don’t understand how one party talks about leadership change in another party,” said Karat, “We differ on various issues with the Congress, but have never demanded a leadership change in that party.”

Despite Karat’s patch-up efforts, say insiders, the battle between him and the CPM’s West Bengal chief is far from over. It has only got prolonged, evident in how resolutely the Bengal lobby stuck to its position on the loss review. This suits Buddhadeb, and perhaps that is the only way he can sustain his rebellion against the general secretary, whose loyalists dominate the Politburo and CC, the party’s top two leadership bodies. Buddhadeb has been cold-shouldering these two for some time now, and appears to be getting his way. Says the senior CPM leader, “As against the general secretary’s insistence on the review report being state-specific, focusing on the weaknesses and failures of the Left Front government [in West Bengal], it has now been decided that the review report will be in an all-India context. That is, it will also focus on deviations in the implementation of the party’s political-strategic line at the central level that resulted in a re-alignment of opposition forces that contributed to the loss of West Bengal.”

This places Karat in a quandary. If he tries pinning the blame on Buddhadeb for the Bengal drubbing, he must also accept a large part of that blame; and if Karat wants to shield his neck, he must go easy on the lieutenant who led the Left for over a decade in the state.

The strain in the Karat-Buddhadeb relationship came out in the open soon after the CPM’s miserable performance in the state in the 2009 Lok Sabha polls. The Bengal lobby argued that the decision of the central leadership under Karat to sever ties with the Congress over the Indo-US Nuclear Deal in 2008, coupled with the CPM’s third front adventurism ahead of the polls, pushed the West Bengal Congress into the arms of Mamata Banerjee’s Trinamool Congress, thus uniting the opposition and ruining the Left’s chances in the state. These decisions, it further argued, constituted a transgression of the political-strategic line that was adopted at the last Party Congress at Coimbatore in April 2008. (This gathering, the CPM’s highest decision-making unit, typically meets every three years; its key task, apart from reconstituting the central leadership, is to determine the party’s political strategic line, which must stay sacrosanct until the next such gathering.) Karat and his loyalists, on their part, insisted that it was the Buddhadeb government’s faulty industrialisation and land acquisition policies—in Nandigram and Singur—that precipitated the party’s crisis of popular rejection.

The deadlock persisted and forced the party to hold—for the first time in its history, since a general secretary has never been accused of transgressing the mandate of the Party Congress—a meeting of the Extended Central Committee. But this conclave, held in August 2010 at Vijayawada and attended by CC members as well as state committee members from across India, could not achieve much. It merely postponed the party’s fratricidal war, afraid of injuring itself in the lead-up to the Assembly elections due in West Bengal and Kerala, the other state under its rule back then.

Since then, the party’s West Bengal rout has forced it into deep introspection, a process that seems to have deepened the divide within. Such was the discord at Hyderabad that the CC could not go beyond making a few tentative observations on the ‘preliminary’ review of the Assembly poll results in West Bengal.

Even so, Buddhadeb’s absence was not Karat’s only headache in Hyderabad. No less haunting for him was the silence that former Kerala Chief Minister VS Achuthanandan maintained all through the meeting, and the fact of his departure for Kerala without even attending the last session. Sources say that VS left Hyderabad in a huff after it became clear that the CPM general secretary, capitulating again to the party’s Kerala strongman (and VS’s bête noir) Pinarayi Vijayan, would bar him from re-joining the Politburo. According to a leader close to VS, having just led the party’s impressive near-win in Kerala, the former CM was expecting his performance—widely acclaimed within the party—to propel him into the Politburo. VS saw Karat’s post-poll acknowledgement of his stellar role as a sort of welcome.

At Hyderabad, however, the Pinarayi faction, which had lain low in view of VS’s rising stock, struck hard, forcing Karat to reverse his stance on VS. As soon as the CC started discussing the political draft that was presented by the Politburo, Pinarayi loyalist MA Baby, who started the debate, tore into the portion of the draft that said the state leadership could have ‘avoided’ the controversy caused by the delay in granting an electoral ticket to VS for the Kerala polls.

Later, by the time the Politburo met to firm up its response to various issues raised by CC members, Karat’s enthusiasm for VS’s re-entry had run cold. “The question of taking VS back was raised when the Politburo met to finalise its reply to the CC, but Prakash deferred it saying that the present CC had already started the process for the Party Congress,” says the senior CPM leader.

Many in the party believe that Karat’s decision to push the issue of VS’s Politburo membership to the next Party Congress, to be held in April next year, was at the behest of Pinarayi’s pressure pointsmen. Whatever the reason, it marked the end of the general secretary’s attempt to win over Kerala’s former chief minister. Dejected, VS did not wait to hear what the Politburo had to say. He simply flew home.

The erosion of Karat’s authority in both Kerala and West Bengal just ahead of the next Party Congress does not augur well for the party’s top leader. Already, questions are being raised about his ability to run the party. In the Hyderabad CC, for example, a senior leader made a point of mentioning in his speech that all past general secretaries of the CPM had risen to authority on the back of mass movements, and so should it be now. Karat’s lack of experience in mobilising the masses is well known, and such thoughts may make the going harder for him at a time that the CPM is suffering one of its worst ever downturns.

The general secretary’s position would turn even more vulnerable if VS, a hero among Kerala party cadres, manages to pull off a good number of loyalist office bearers at different levels of the state party unit (soon to be reconstituted). If that happens, Karat will find himself in real trouble, because Kerala, which boasts the CPM’s largest membership base among all Indian states, has been the prime source of his strength within the party. A rebellion, even among a section of its Kerala unit, especially with the Bengal lobby on the war path, would be rather hard for Karat to quell. There is, don’t forget, a Party Congress coming up.

Karat still has almost a year to rectify things and regain his party’s confidence.

For the moment, though, the CPM under him is at risk of suffering an internal seizure.