A Tale of Two Brothers

The feud between Alagiri and Stalin threatens to split the DMK 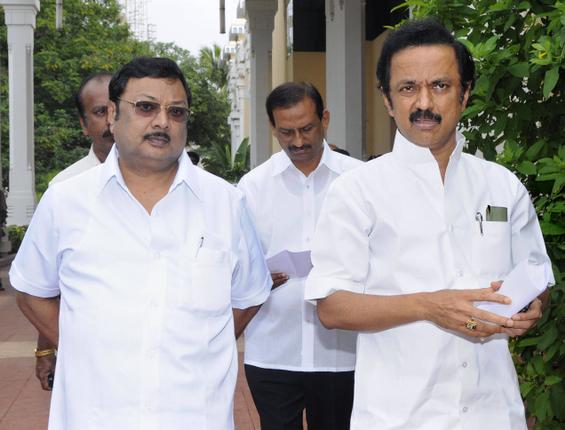 The feud between Alagiri and Stalin threatens to split the DMK

The Dravida Munnetra Kazhagam (DMK) faced a new crisis on Saturday, 4 January 2014, with the dissolution of its Madurai urban district unit. The feud between brothers MK Alagiri and MK Stalin was back in the headlines as a temporary committee largely comprising Stalin’s supporters took charge of the Madurai district unit, traditionally Alagiri’s stronghold.

In a brief statement, party general secretary K Anbazhagan said that the DMK urban district unit, zonal and circle units were all being disbanded with immediate effect as their functionaries were acting ‘against party discipline and orders of DMK chief M Karunanidhi’. No further word has emerged from the party headquarters, and for the moment there is stony silence on what the next course of action will be on either side.

The immediate provocation, though, seems to be the controversial posters put up by Alagiri’s supporters stating that the party’s general council meet would be held in Chennai on 30 January, Alagiri’s birthday. This, apparently, was seen as an attempt to undermine the importance of the DMK’s general council meeting held in December.

While the fallout of the dissolution is under speculation, The Hindu quoted G Thalapathi, a Stalin loyalist who has been appointed head of the temporary six-member committee for electing new office bearers in Madurai, as saying that the move will not in any way affect the party in the Lok Sabha elections.

However, the dissolution is being seen as a move to further alienate Alagiri and underline Stalin’s control over party affairs. Also, the decision may be meant to pre-empt any possibility of a rebellion against party decisions ahead of the Lok Sabha polls. In the backdrop of the simmering succession war between the brothers, the possibility of a split within the party and the likelihood of the DMK going in for an alliance with Captain Vijayakanth’s DMDK instead of the Congress, the elections to elect new office bearers in Madurai will be a decider of sorts for the shape of things to come. Karunanidhi has distanced himself from Alagiri’s comments on Vijayakanth saying his comments were not only regrettable but also condemnable. In an interview to a private TV channel, Alagiri said he did not consider Vijayakanth a politician as he lacked ‘political decency.’

This is not the first time the party has cracked the whip on Alagiri’s supporters. In 2003, the entire urban district unit comprising his supporters was disbanded in a similar manner. Alagiri supporters have also been issued show-cause notices in the past for alleged anti-party activities.

Although speculation of a split in the DMK has risen in the state, both brothers have chosen not to speak on the issue yet. The party and onlookers are watching the bickering brothers closely for a sense of what the future holds.