A Community Led by Dunces

From the veneration of Bhindranwale to the denial of divorce, Sikhs are being led by men who have no right to speak on their behalf 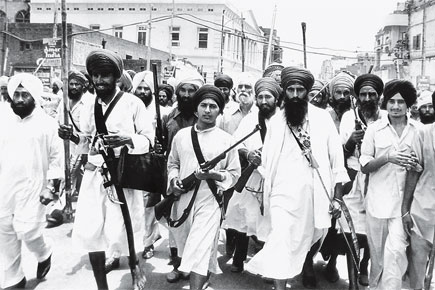 From the veneration of Bhindranwale to the denial of divorce, Sikhs are being led by men who have no right to speak on their behalf


The problem with religious orthodoxy in our times is that it is mainly manned (and the emphasis on gender is deliberate) by those most opposed to modernity. Men who believe that the truth has already been revealed in a manner that allows for no argument also tend to believe that history can be read only in one way. It almost goes without saying that they believe they have the exclusive right to decide what the proper reading of history is.

On 20 May, karseva (voluntary work) for the construction of a memorial to the victims of Operation Bluestar began at the Harmandir Sahib (Golden Temple) Complex in Amritsar. The memorial is overdue—many of the victims were ordinary people, caught in the wrong place in an ill-timed and ill-thought-out operation. But not all those who died fall in the same category, and it is for this reason that the karseva and memorial is problematic.

The karseva was started by Akal Takht Jathedar Gurbachan Singh and the head of the Damdami Taksal, Baba Harnam Singh Khalsa. For those who have forgotten Punjab’s recent history, the Damdami Taksal is the seminary once headed by Jarnail Singh Bhindranwale. For good measure, Ishar Singh, Bhindranwale’s son, also spoke on the occasion. No one will say this upfront but by its very nature, the memorial, whether we like it or not, will also be a tribute to Bhindranwale.

Our memory is short and events less than 30 years old seem as if they belong to the distant past. Many Indians outside Punjab need to be reminded that Bhindranwale was the man who necessitated Operation Bluestar in the first place. He was not alone to blame, this turn of events would not have been possible without considerable help from Indira Gandhi, who, irked by the Akali resistance to the Emergency, had propped him up to challenge the Akali hold over the Sikh orthodoxy. As she discovered, he was not a man so easily controlled and was soon enough acting on his own.

Bhindranwale was no thinker. He had no coherent position on any complex issue, but was willing to mouth the rhetoric that ensured the Akalis were afraid of losing their own constituency, and he was willing to do something the Akalis had never done, use violence to achieve political ends. His hitmen, such as Surinder Singh Sodhi, assassinated a number of people who earned his wrath. He had also dabbled in politics, openly supporting Congress candidates against the Akalis at one point and then trying to put up his own candidates for elections to the Shiromani Gurdwara Parbandhak Committee (SGPC), the Sikh body that controls all gurdwaras in Punjab, with little success.

This man, a terrorist who thought nothing of using violence to terrorise and kill his opponents, whether Sikhs or Hindus, a man who never enjoyed popular support within the Sikh community (despite the impression being sought to be conveyed today), was truly converted into a sant (holy man) by the stupidity of the Indian State. Whatever the facts and events that led to Bluestar, the lasting image the operation created was of a man who died defending the Harmandir Sahib against an attack by the Indian Army, in the company of hundreds of innocents. The truth about the man has since faded in the face of this last image, and it is this image that remains dangerous, it is this image that the memorial will seek to propagate.

It builds on something already visible in the Sikh community that outsiders find difficult to understand. In Punjab, Bhindranwale has re-emerged in the imagination of some young Sikhs as their counterpart to Che Guevara. Posters, T-shirts, and car stickers bearing his image do brisk business. Much as the Left has never really bothered with the truth of Che Guevara, a lunatic who enjoyed shooting his opponents in cold blood, for many young Sikhs in Punjab, Canada, the UK and US, Bhindranwale has emerged as a symbol of self-assertion, and they accept the iconography around his name without question, without an understanding of the absurdity that this often represents. Today, in west Delhi, it is possible to find Afghani Sikhs, who have been given a home in India after fleeing the Taliban’s oppression, wearing Bhindranwale T-shirts.

This kind of romantic idealisation, which does not care about facts and does not deal in truth, has always been evident among the young (and many of the Left), but the men who are seeking to make use of Bhindranwale’s image today are not young and romantic, they seek to use this image for their own ends. The Bluestar memorial is the result of an SGPC initiative, and no minister from the ruling Akali government was present when the karseva started. But that this is a pretence is evident only to those who know Punjab. The SGPC is controlled by the Akali Dal, and if there is a memorial being built, if there is a karseva underway, it is because this is what Parkash Singh Badal and his son Sukhbir want. Much as the Congress once thought it could surreptitiously control Bhindranwale, the Akalis now believe they can exercise a similar behind-the-scenes control over his image.

For almost a decade, the mainstream Akalis became irrelevant to the politics of Punjab thanks to Bhindranwale and other extremists who have laid claim to his image after his death. It was not because they lost popular support among Sikhs; even in the worst phase of violence in Punjab, the terrorists enjoyed little popular support. They did much the same as Bhindranwale did when he was alive. They claimed to be spokesmen of a community on the strength of the gun, which was used in equal measure against opponents within and outside the faith.

The Akalis are determined never to let the extremist fringe override the popular support they enjoy within the community, but they are doing so not by challenging the control extremists have over Sikh institutions but by ensuring that they have their own equivalent of these extremists in place in such institutions. As the Congress should now know, such men are not easily controlled when the time comes for them to make their bid for power.

Ironically, the Akali Dal under Sukhbir has attempted to reach out to communities largely seen as outside the party’s traditional sphere of influence, such as urban Hindus and Dalits who are not Sikhs, and this was one of the factors that saw it re-elected earlier this year. This leads us to the current paradox: while the party that represents the voice of the community’s majority has opted for a more inclusive and open Punjab, it has also ensured that the community itself is short-changed. The Sikh orthodoxy and its institutions represent the worst aspects of the community, close-minded and bigoted, a parallel to the hardline mullahs of Islam. And this is reflected across the globe in the Khalistanis who are often seen to speak for the community across Canada, the UK and US, even when they cannot win a contest in their own gurdwara.

The impact of such thinking is visible in many ways. Two years ago, the BBC aired a documentary by one of its then news presenters, Sonia Deol. It was titled 1984: A Sikh Story. It attracted 1.3 million viewers, but the media focus was on the few who felt affronted. They became spokespersons for all Sikhs. Consider some of the objections. Someone called Sadhu Singh, chairman of the Council of Sikh Temples, was quoted as saying that people were angered because the BBC showed Bhindranwale looking like Bin Laden: “They used pictures of him wearing a turban and holding a gun. To someone who doesn’t know what Sikhism is about, it would be very misleading.” It is another matter that Bhindranwale revelled in getting himself so photographed. He also said, “Some people are very upset that the documentary also showed Sonia Deol dancing with Hindus as if there is no problem between Hindus and Sikhs.” This is in 2010, when there is no such problem in Punjab but somehow there is in the UK.

The hold that the most regressive in the community have over the orthodoxy plays out in ways that affect others of the faith. On 22 May, the Lok Sabha passed the Anand Marriage Act, which allows Sikhs to register marriages under the Anand Marriage Act instead of the Hindu Marriage Act, which for many of the faithful has the symbolic value of reinforcing a Sikh identity. What the media in Delhi did not do was report in detail the nature of the debate that had taken place in the orthodoxy before this Act was passed and how removed it is from the views of the community in general. This is in keeping with how the mainstream media, whether here or in the UK or US, represents minority issues, letting the orthodoxy speak for the community.

A few days before the Act was to come up in Parliament, it was pointed out that the Act fails to even mention the word ‘divorce’. It is worth quoting what the orthodoxy felt:

“It is not appropriate to resort to divorce in Sikhism and therefore it has not been included in the Bill”—Avtar Singh Makkar, SGPC chief

“The Anand Karaj takes place in the presence of the Guru Granth Sahib. So it is imperative for an individual to uphold his/her marital ties all his/her life”—Giani Gurbachan Singh, Akal Takht Jathedar

“As divorce is not in consonance with religious sentiments of Sikhs, the Bill doesn’t talk about it”—former Vice-Chancellor of Guru Nanak Dev University SP Singh

While divorce will be possible by taking recourse to the Hindu Marriage Act, the comments on this issue sum up the kind of people, whether from the clergy or universities, who have come to speak for Sikhs in general. Left to these people, if the escape clause of using the Hindu Marriage Act did not allow divorce, people getting married under the Anand Karaj Act would never be allowed this possibility. By denying the option of divorce, the Act takes no position on the kind of compensation and maintenance a woman deserted by her husband is entitled to. This is being done in a community where violence against women is widespread. It is in keeping with the fact that women have been systematically kept away from any role in Sikh institutions. It is no surprise that no woman seems party to this debate over divorce.

From the resurgence of Bhindranwale to the denial of divorce, the voices that represent Sikhs do not speak for them. They represent the most regressive impulses of the community, and in ordinary settings, they would not be able to speak for a roomful of Sikhs, leave alone the entire community. They owe their position to people such as the Badals who hope to use them when necessary, but as the past has shown, such men are not amenable to control. The quality of leadership matters. If we have to draw any lesson from Bluestar, it is that tragedy awaits a community that makes space for people such as Bhindranwale and a nation that reposes faith in politicians like Indira Gandhi even after the Emergency.