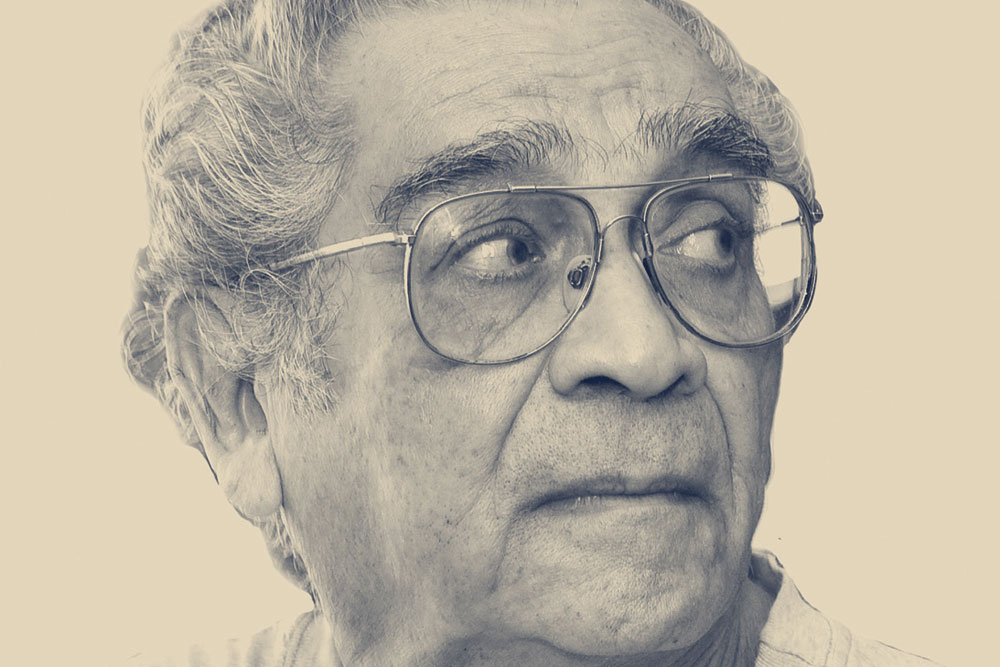 
A TEXT FROM DADIBA Pundole, director of Pundole Gallery, at 8.30pm on Monday, January 6th, 2020, confirmed the inevitable. Akbar Padamsee had passed away at 7.05pm. He was 91 and had survived cancer and heart ailments. He was in Coimbatore, with Bhanu, his wife of almost four decades, at the Isha Yoga Ashram. For many who knew him well, it must have offered solace to know he slipped away “peacefully”.

The loss is still voluminous, especially considering how the artist remained committed to the practice of painting, despite his age and his body’s obvious frailty. He was distinctively impelled towards creating work. Unlike his late contemporary, SH Raza, however, he wasn’t interested in repetitiveness; he wasn’t reiterating his own tried and tested formalities. His method was unlike even MF Husain, his other late fellow modernist and member of the Progressive Artist Group, who was known for the compulsive nature of his art making, even into his final years. Padamsee was driven by the same intellectually-minded spirit that had marked many of the significant and innovative phases of his career. He continued to draw from a wellspring of poetry, literature, mathematics and philosophy.

I had seen evidence of such an engagement during a studio visit in August 2018. On a wall in his Prabhadevi studio were two recently completed metascapes, a landscape genre he was known for having pioneered. Both sun and moon were absent from these canvasses, an intriguing fact, considering the rich origin story behind their initial appearance in his metascapes—when he was reading the introductory stanza to Abhijnanashakuntalam. “Here, Kalidasa speaks of the eight visible forms of the Lord without mentioning them by name, the sun and the moon as the two controllers of time, water as the origin of all life, fire as the link between man and god, and the earth as the source of all seed,” he had told Mala Marwah in an interview published in the Lalit Kala Contemporary in April 1977. In these newer works, the intriguing use of yellow facilitated a superb radiance; a colour that heretofore cannot be said to have dominated his work, a detail worth further examination, considering how eloquently versed the artist was in colour theory.

Bhanu, an art historian and researcher, had also made an observation about the emergence of yellow in Padamsee’s recent work. The monograph she co-edited with Annapurna Garimella remains the definitive volume on Padamsee’s legacy, even though she had spoken, during our meeting, about how the book could use an update, given Padamsee’s recent artistic developments. Published by Marg in 2010, the book surveyed, through a range of essays by art historians, artists and reviewers, the foundational achievements of Padamsee’s then five-decade-long career, particularly elucidating upon his prescient experimentation with new media through his 11-minute animated film Syzygy, made in the late ’60s, premised on his desire to expound a theory of programming form. Padamsee had produced the film during the Vision Exchange Workshop (VIEW), a culturally ripe moment he had pioneered between 1969 and 1972, after he had resettled in Mumbai after having visited Paris. Padamsee had won the Nehru Fellowship, affording him Rs 3 lakh, a sum he matched with his own finances, upon a suggestion from the painter, Krishen Khanna, thus evolving what has come to be known in modernist Indian art history as VIEW. Syzygy was an experimental film years ahead of audience approval. When Jean Bhownagary, then Films Division of India’s chief producer, introduced it prior to its screening at a UNESCO gathering in Paris in the early ’70s, he advised its viewers to take a cautionary aspirin, alleging that “this film will surely give you a headache.” Many people walked out, unable to comprehend the mathematical poetry that lay at its core.

It is indeed tragic that Padamsee never continued with his experiments in film. He did, however, explore many other media, from sculpture to photography to computer-generatedart, all with astounding success. Art history has yet to process his multifaceted legacy and the uniqueness of his career trajectory in relation to his peers.