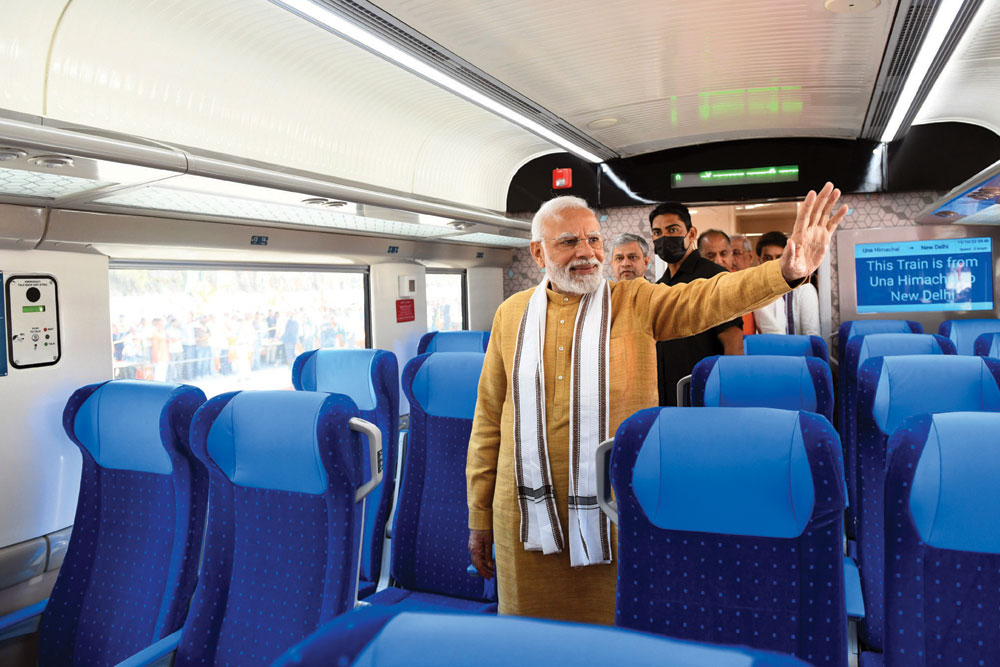 Prime Minister Narendra Modi on board a Vande Bharat train after flagging it off at Una in Himachal Pradesh, October 13, 2022


AT THE SMALL AND clean Una station in Himachal Pradesh, a young cop is having a tough time stopping people from crossing the railway tracks between the platform and a train on a parallel track. “Hato, train a rahi hai (Move, there’s a train coming),” he shouts, wiping sweat from his forehead on a cool afternoon. Within minutes, at 1.21PM, as scheduled, a white and blue train with an aerodynamically profiled nose and large fixed glass windows glides into the station. Heads turn. Those who don’t have to catch the train during its brief halt, turn on their mobile cameras to take photographs.

It’s an unfamiliar sight at India’s railway stations. The Vande Bharat Express, now the fastest train in the country, is on its way from Amb Andaura, the tiny Himachali town at the foothills of the Shivalik range, to New Delhi. Inside the fully air-conditioned chair-car train, passengers start taking selfies as they settle down on the reclining chairs, similar to those on an aircraft. In over a minute, it almost reaches full speed. It’s like a long-awaited dream come true, in a country where the first passenger train ran between Bori Bunder, Mumbai, and Thane in 1853.

Just over a month ago, at Una, Prime Minister Narendra Modi flagged off the train, the fourth Vande Bharat Express since it was first launched in 2019, from New Delhi to Varanasi. India’s first indigenous semi-high-speed train, each of the five Vande Bharat routes operational till date, has been launched by Modi. A self-propelled engine train, it was tested at a top speed of 180 km per hour (kmph) during trials and cleared for operation at a top speed of 160 kmph, though its actual operating speed is restricted to 130 kmph. By 2024, when India goes in for the next General Election, over 100 Vande Bharat trains are expected to criss-cross the country, including a sleeper version. Besides the target of 75 by next year and 400 over the next three years, the government is likely to announce another 300-400 in the next Budget.

For Sudhanshu Mani, innovator of Train 18, which was later named Vande Bharat, it was the realisation of a long-cherished dream. Since his childhood, he had wondered why India did not have swanky, speedier, aesthetically appealing trains like the ones abroad. At that time, in the early 1970s, he had seen them only in magazines. When Mani, an officer of the Indian Railway Service of Mechanical Engineers (IRSME), asked for a posting as general manager of the Integral Coach Factory (ICF) in Chennai in 2016—for what would be his last assignment before retirement—he still had his eyes set on a modern train. “I asked for the post of general manager of ICF, unlike others who opt for bigger zonal railway postings, because I had this dream and the vision, for a long time, to get a modern and fast train, with pleasing interiors and exteriors, designed and manufactured in India. I soon realised that the officers and staff of ICF had the right capability and the chutzpah to take up the project of a new train design and manufacture it de novo, from scratch,” he tells Open.

Mani, along with the ICF team, built the train from concept to delivery in 18 months, so that the project was completed before he retired in December 2018 and to ensure it was not abandoned before completion. According to Mani, a project of this magnitude would generally take 36-42 months. At every step, there were obstacles and challenges, the first being getting the Railway Board to sanction the project. “When I mooted the proposal, I was met with derision, red tape and downright dismissal, partly due to the jealousy of some board officials and partly due to roadblocks put up by the import lobby. I had to literally fall at the feet of the then chairman, but killing my vanity for the greater good was no problem. Then there was the issue of keeping the team motivated in the firm belief that the project would be a success, and that even in case of failure, there would be no attempt to find scapegoats,” he says.

IN HIS BOOK My Train 18 Story, Mani recalls the day he rushed to New Delhi in 2017 to meet then Railway Board Chairman AK Mittal at his home, uninvited, on a day off. Mani says he sought sanction for just two trains, promising to make them at one-third the imported cost. “And Sir, I am going to grab your feet now and not release them till you give me this sanction.” Even after the sanction was given on April 1, 2017, there were several battles—the import lobby, foes on the board, and general negativity. The train, made at a cost of ₹98 crore per rake, was unveiled in October 2018. By 2019, the train was being tested across the country. The prime minister, in his Independence Day speech in 2021—as India started celebrations for 75 years of its independence—announced 75 Vande Bharat trains in 75 weeks, connecting every corner of the country. The making of the train also coincided with Modi’s vision of Atmanirbhar Bharat and Make in India. With this in mind, the railways ministry roped in the Steel Authority of India (SAIL) and the Rashtriya Ispat Nigam to manufacture wheels for Vande Bharat trains, as it was necessary to produce 2.5 lakh wheels for 400 trains over the next three years.


The making of the train coincided with Modi’s vision of Atmanirbhar Bharat. The railways ministry roped in SAIL and Rashtriya Ispat Nigam to manufacture 2.5 lakh wheels for 400 trains over three years

But what took India so long to produce a modern train like Vande Bharat? Mani cites several reasons, but blames it mainly on the Indian Railways bureaucracy, its internecine battles and intent to import. “Its largescale adoption by the ministry today and repeated praise by the prime minister himself clearly shows it was something that had to happen but the bureaucracy was not ready to deliver. It obviously feels good that a baby you gave birth to with your team at ICF has finally come of age and every train is being inaugurated by the prime minister himself. He, and indeed the people of India, sees it as a symbol of a resurgent India. We just made a train but it has attained cult status because of the commitment and sense of purpose shown by the entire team,” he says.

The train, a major development in the history of the state-owned Indian Railways, has altered train travel experience in the country, which has the fourth largest railway network in the world after the US, China and Russia. With the comfort of reclining chairs, bio-vacuum-type toilets, pantries, food and beverages for a higher fare, speed and punctuality, passengers even claim that it has taken them back to train travel after decades. “It’s really swanky. The insides look like a train anywhere in Europe. One doesn’t mind paying more if the standard is maintained. I had stopped travelling by train, but after several years I’m enjoying the train experience,” says Bandana, an architect travelling from Chandigarh to Delhi in the executive class which has swivel chairs that can rotate fully and more leg space than the general chair car. The train cuts down travel time between Chandigarh and Delhi to three hours, nearly half-an-hour less than the Shatabdi, the fastest on the route. 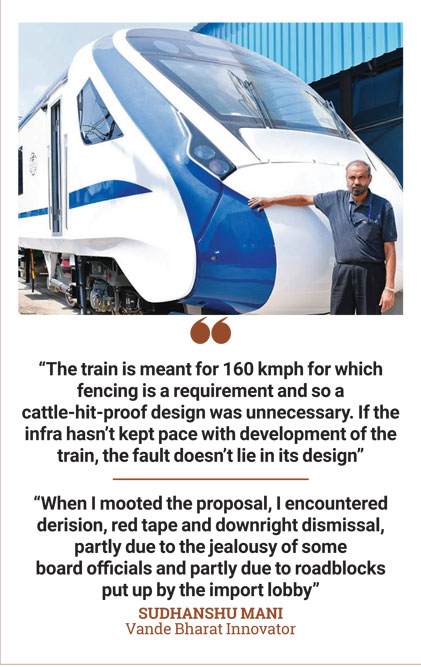 At Chandigarh, the Una-New Delhi Vande Bharat Express gets almost fully occupied. There is chaos between goodbyes and passengers and porters jostling to find seats, fearing the automatic doors would close. “This is better than any train in the UK. There you don’t have the luxury of such snacks and beverages. But the onus is also on the people to ensure the train remains clean,” says Rohit Kochhar, who works as an oncologist in Manchester. Before him on a table attached to his chair is a tray with a samosa, a sandwich, a piece of cake, almonds, buttermilk and tea or coffee. The fare comes to ₹2,240, with catering, for the executive class from Amb Andaura to New Delhi, and ₹1,240 for the general chair, with catering.

For Prerna, a Chandigarh-based architect travelling on the train for the fifth time, it is a super luxury and fastest train experience. “It takes me right into the heart of Delhi in three hours from Chandigarh.” Earlier, as the train crossed Una, the attendants, all wearing Himachali caps and masks, began arranging the elaborate lunch trays, starting with tiny sachets of pickle, then packets of rice, chapatis, main course and dessert. As the train nears the New Delhi railway station, it is a few minutes ahead of schedule. It stops a little short of the station before making it to its destination on the dot.

Mani is happy that there is movement towards making more Vande Bharat trains—75 in 75 weeks and 400 in three years. “It may not be possible in the next four years but it is doable in the next six years. While the third, fourth and fifth rakes have been turned out since August this year, ICF will perhaps turn out rakes at the rate of two to three every month from January. Similarly, the government has shown resolve and huge tenders have been floated which, if finalised this year, should have good deliveries from 2025 onwards.”

Railways Minister Ashwini Vaishnaw has recently announced that by January or February, four-five Vande Bharat trains would be manufactured every month. His ministry is laying out a roadmap to export Vande Bharat trains by 2025-26. The train is not as fast as the Japanese Bullet Train, which is expected to run on the high-speed rail corridor between Mumbai and Ahmedabad at a maximum speed of 320 kmph. Vande Bharat has, however, beaten the Bullet Train in completing the 0-100 kmph trial run in 52 seconds, for which the latter took 54.6 seconds.

The latest Vande Bharat express between Mysuru and Chennai via Bengaluru, despite clocking the lowest average speed among the five trains introduced till now, cuts down travel time by half-an-hour in comparison with the Shatabdi, also an air-conditioned chair car. The New Delhi-Varanasi route takes about eight hours, making it 40-50 per cent faster than the fastest train connecting the two cities.

Vande Bharat has faced its share of criticism, with cattle run-over incidents, etc. “The train is meant for 160 kmph for which fencing is a requirement and so a cattle-hit-proof design was unnecessary; if the infra has not kept pace with development of the train, the fault does not lie in its design but slow upgrade of matching infrastructure. In any case, ICF should study the design to modify it to make the nose sections more replacement-friendly,” says Mani. He sees a future where the poorest travellers can afford air-conditioned travel and trains with maximum operational speed in the range 160 to 200 kmph connect all big cities in the country.