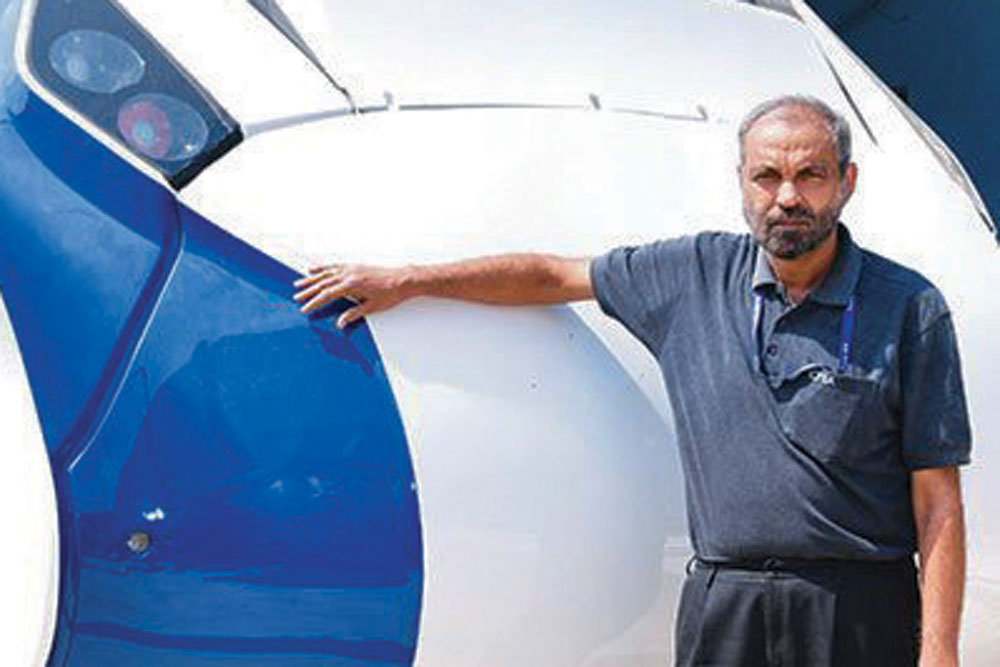 
How did it all start?

India had needed a modern train set for decades as the trend the world over had changed to manufacture of train sets, usually a train with permanently coupled coaches without any locomotive and all the equipment mounted under the board. It was, however, not happening. I asked for and got the post of general manager of the Integral Coach Factory (ICF) in 2016, unlike others who opt for a bigger zonal railway posting, because I had this dream and the vision for a long time to get a modern and fast train, with pleasing interiors and exteriors, designed and manufactured in India. I soon realised that the officers and staff of ICF had the right capability and the chutzpah to take up a project of a new train design and manufacture it de novo, from scratch. The support industries in India had also reached near-world-standards in certain key areas and were waiting for a friendly nudge to excel. All it needed was to channel this energy to bring something noteworthy to fruition. This was going to be, in all likelihood, my last assignment before superannuation, after completing near-life-long service of 35 years as a railway officer, including a rare stint in Germany in the Embassy of India as the Minister (Railways). So, I had the dream, the vision, the opportunity, and the good fortune that a great team, raring to go, was bequeathed to me. I cherish the memories of those heady days which we spent in improving ICF in general and getting this train made in particular.

Why did it take India so long to come up with a train like Vande Bharat?

That may not make for good reading. As I said, India needed a modern train set for decades, but the Indian Railways bureaucracy had repeatedly let the country down, immersed as it was in internecine battles between competing departments and also  intentions to import. Added to that has been the age-old bane of babudom and indecision. Its largescale adoption by the ministry today and repeated praise from the prime minister himself clearly shows that it was something which had to happen but the bureaucracy was not ready to deliver. After all, the same staff managed to design and build the train. I have said this many times, and I will say it again, the technical audacity of the team to do something more than more of the same was there before me and I was fortunate to have this superb team without which building this train from concept to delivery in a short period of 18 months would not have been possible.

What were the biggest challenges?

The first was to get the board to sanction the project. When I mooted the proposal, I was met with derision, red tape and downright dismissal partly due to the jealousy of some board officials and partly due to roadblocks put up by the import lobby. I had to literally fall at the feet of the then chairman but killing my vanity for the larger good was no problem. Then, there was the issue of keeping the team motivated in the firm belief that the project would be a success, and that even in case of failure, there would be no attempt to find scapegoats. Getting the right vendor-manufacturers to deliver the equipment and parts on time even as we were not able to deliver all drawings and technical specifications to them on time was a day-to-day challenge in the last six months of the project. And, of course, delivering the train in 18 months from concept to turnout involved disappointments on a daily basis and the trick was in not getting disheartened but to keep moving with a fresh resolve.

What was the happiest moment on the journey and the biggest disappointment?

It obviously feels good that a baby that you gave birth to with your team at ICF has finally come of age and every train is being inaugurated by the prime minister himself. He, and indeed the people of India, does see it as a symbol of resurgent India. We just made a train but it has achieved a cult status because of the commitment and sense of purpose shown by Team ICF. The happiest moment obviously was the day the train was unveiled in October 2018 to a tumultuous welcome by the staff of ICF and their families, the press and the general public as well. The disappointment obviously was the negativity and machinations of certain people which unnecessarily delayed the train. But since we are now in the stage of ascendency, there is no point talking about this sordid past. As for me, I will simply quote the Bard: “Things won are done, joy’s soul lies in the doing”

What was the reaction when you were offered the project to lead the team?

No. I was not offered anything. I requested for posting as general manager, ICF, and the then chairman agreed to post me there. Later, I pleaded with him to get the sanction to make two trains and he agreed, albeit reluctantly.

How did you complete it in 18 months?

Usually, a project of this magnitude, from concept to delivery, takes 36 to 42 months. We wanted the project to be completed before I retired so that any chance of it getting abandoned after I left the scene was precluded; this meant that the train be turned out in calendar year 2018 as I was retiring in December 2018. To let the entire team and allied industry remember it all through the project, we christened it Train 18. Once this message was through, it was a matter of sheer hard work and commitment, shedding all doubts that prevent us from doing our best.

The target is 75 by next year and 400 in the next three years. Are these realistic?

After the two rakes that were turned out in 2019, there had been a lull but we will not go into that negativity and vilification of the train and the team that followed; the two trains continued giving trouble-free service. The vibes today are great and there have been various announcements: by the prime minister on August 15, 2021 that 75 such trains would ply across the country in 75 weeks and by the Union finance minister in the Budget that 400 Vande Bharat trains would be manufactured in the next three years and so on. A common refrain in railway and industrial circles has been that the government has overreached. I view it differently; it may not be possible in the next four years but it is doable in the next six years. While the third and fourth rakes have been turned out since August this year, ICF will perhaps turn out rakes at the rate of two to three every month from January onwards. Similarly, the government has shown resolve and huge tenders have been floated which, if finalised this year, should have good deliveries from the year 2025 onwards. So, while 75 trains by August 15, 2023 or 400 in three years since the Budget announcement are very long shots, what is important is that there is good movement and energy in making more Vande Bharat trains.

There has been criticism about cattle accidents and that fenced tracks, as well as high-speed tracks, are not yet in place.

Trains have a right of way on tracks and a driver is not supposed to stop because of a trespassing human or cattle; whistle, yes, to alert the culprit but stop, no, barring some exceptions. The increasing menace of cattle has socio-economic dimensions. Division of fields has made them smaller and villagers may have fields split by a track or their housing on one side of the track and their field or grazing ground on the other. Instances of cattle on the track are, therefore, frequent.

Non-elevated tracks in Europe for semi-high-speed, or above, are usually fenced but unfenced tracks are not uncommon. They do believe in the public following the discipline of not trespassing and they do not have stray cattle which usually graze in fenced enclosures. Train sets are new in the country and unlike a locomotive, a passenger coach is in front, just beyond the cab, and therefore the safety of passengers has to be given greater thought. Unlike locomotives, however, the nose of a train set cannot have an ugly cow-catcher, lest you kill its USP of aerodynamic profile and aesthetics. Its nose was designed using advanced computational flow dynamics tools for aerodynamics and its front structure, which supports the FRP nose, is strong enough to withstand an impact of a cattle-hit without any danger to passengers. The FRP nose gets damaged and sacrificed and its sections can be changed easily by the depot. It is a small price to pay till Indian Railways is able to solve the cattle menace.

The train is meant for 160 kmph, for which fencing is a requirement and so a cattle-hit-proof design was unnecessary; if the infra has not kept pace with development of the train, the fault does not lie in its design but the slow upgrade of matching infrastructure. In any case, ICF should study the design to modify it to make the nose sections more replacement-friendly.

As for mitigating the menace of cattle, let this mishap act as a catalyst to expedite the sanctioned works for the upgrade to 160 kmph on the Delhi-Mumbai and Delhi-Howrah sections, which stipulates fencing on a war footing. Simultaneously, sections between two large cities which are less prone to incidents of cattle run-over should be the first candidates and, in any case, upgrades of sections on which Train 18 is likely to run should be sanctioned. A temporary but inexpensive fencing can also be installed quickly using scrapped concrete sleepers, which are otherwise useless.

What’s the future of Indian Railways? What should be next on its roadmap?

I will summarise it to what I would like to see over a timeframe of 15 years:

– Look after the common man, the poorest travellers who would not be so poor hopefully with the Indian economy on a path of good growth, by making air-conditioned travel affordable for all, barring one or two non-AC trains, on all routes for long-distance travellers.

– Indian Railways winning back share of freight traffic to be at the level of around 35 per cent of total traffic with an imaginative push for multi-modal handling and efficient collaborations for first and last mile pick-up and delivery.

– Trains sets connecting all big cities, with maximum speed operation in the range 160 to 200 kmph.

– High Speed Rail (HSR) on at least three routes and then more after evaluation, so that we can determine if we need HSR criss-crossing between all large cities.