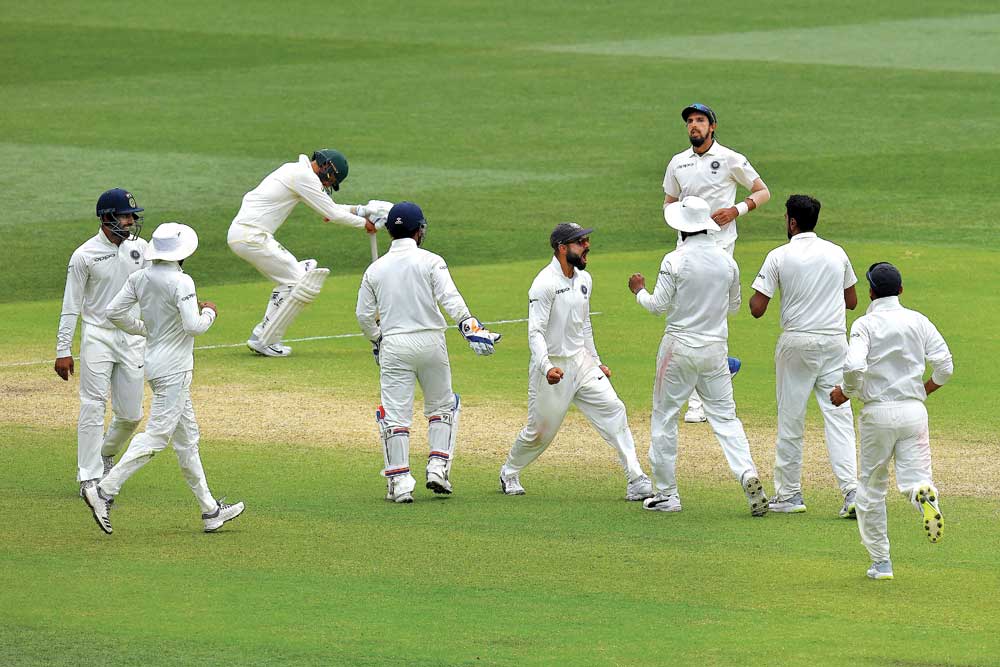 VIRAT KOHLI IS an easily excitable man. Especially when he is glad. Maybe it is in Kohli’s nature. Or, it could simply be due to the pressures of being the leader of the Indian cricket team; and the face—a minutely scrutinised one at that—of a global sport. But by simply observing an outburst of his happiness on the field, it is impossible to conclusively deduce if his team is on the verge of something big or if his bowlers have, say, only dismissed a tailender. Such is the consistent and eruptive nature of his joy—a high-pitched cocktail of euphoria and expletives.

On the final day of the Adelaide Test—India’s first of a four-match series in Australia—Kohli’s emotions bubbled yet again. This time at the fall of Australia’s No 11 batsman, Josh Hazlewood, handing India the win. While the rest of the team congregated by the pitch to share wide smiles and high palms, Kohli roared at the skies a short distance away. There may have been no distinguishing this celebration of his from another earlier in the day or even from a week before, but when Kohli clenched his fist and punched the balmy air of south Australia, he was in fact landing a swipe at history itself.

The word ‘historic’ holds little value without context. Kohli wasn’t the first Indian captain to win a Test match in Australia (heck, he wasn’t even the first to win at Adelaide) and neither will he be the last. But what he had achieved in Adelaide had never been achieved before and will never have the same significance again; for, India had finally bucked the trend of playing catch up in a Test series on these shores—a trend that is as old and precise as the rivalry.

In 1947, when the Indian cricket team first voyaged to Australia—which also happened to be the national side’s maiden assignment post-Independence—no member of Lala Amarnath’s squad could possibly have realised that they were on the cusp of setting an unhealthy precedence. In Brisbane, India were annihilated by an innings and almost every succeeding Indian captain would suffer Amarnath’s solemn fate during the opening Test of successive Australian tours, including Kohli in 2014. In the 71 years since 1947, no Indian team had won the first Test of a series in Australia and no Indian team has yet won a Test series in Australia and somewhere in there is an unmistakeable correlation.

On 11 previous Test tours to Australia, only two Tests had begun with a draw and on both occasions, it took a Herculean effort from the leader of the team. During the first instance in 1985, captain Kapil Dev was named Player of the Match for taking eight of the 10 wickets in the first innings of the game and more recently, in 2004, captain Sourav Ganguly set the stage for a remarkable series with a rearguard hundred that was worth more than just 144 runs. To better understand why starting a Test series well (or without a loss) is so consequential in this land, consider this: 1985 and 2004 remain the only Test tours that India managed to draw, their best-ever results Down Under.

Last week, the onus to not lose their fourth opening Test on the bounce (and, ostensibly, the series) in Australia was once again on the leader of the team, who, today, also happens to be the finest batsman in the world and with a serious passion for the city of Adelaide. In 2011, and under claustrophobic pressure to retain his place in the playing 11, a rookie Kohli struck his maiden Test hundred here; it was the only hundred scored by an Indian in a series that involved Sachin Tendulkar, Rahul Dravid and VVS Laxman.

Then, in 2014, Kohli captained the Test side for the first time in Adelaide— temporarily, in MS Dhoni’s absence— and nearly led India to an unbelievable victory in that opening Test with hundreds in both innings. Kohli came into this Adelaide Test as the leading run-scorer in Tests this year, with 1,063 runs, 593 of those scored in one series in England. It was but a given that for India to do well in the first Test, Kohli had to simmer again. The fact that he didn’t (Kohli summed 37 runs in two innings) and India still won in the end without his batting services would be the second grandest takeaway from the game; second only to the historic value of starting with a win in Australia.

INDIA’S SPORADIC TEST match victories in the two countries that they are yet to win a series in, South Africa and Australia, have predominantly been team efforts—many players contributing, heavily and simultaneously. In Adelaide, however, the superhuman work put in by India’s pace-attack would have been in vain if not for the stoic resistance in the first innings shown by one man. Cheteshwar Pujara, an incorruptible sundial in a smartwatch world.

And when all that new technology refused to synchronise with the times on the first morning of Adelaide, the sundial ticked on; unfailingly, minute after soothing minute.

India’s sporadic test victories in the two countries that they are yet to win a series in, South Africa and Australia, have predominantly been team efforts—many players contributing, heavily and simultaneously

Pujara’s game doesn’t suit everyone’s palate. Not just the average cricket fan’s, but also the team management’s—what with the captain and the coach questioning his pace of play (they call it ‘intent’) in public, often resulting in dropping him from the side on a whim. In both emotion and philosophy he is so radically different to the modern game’s poster boy, Kohli, that one would have to club two separate systems of reference to simply allow them to co-exist at polar ends of a spectrum—Pujara is the chalk to Kohli’s fire; ice to Virat’s cheese.

Within the first hour of the Test, India’s top-order had nearly batted itself out of the contest. Each of KL Rahul, Murali Vijay, Kohli and Ajinkya Rahane couldn’t resist playing the drive well outside their off- stumps and perished. And India had been reduced to 41 for four in under a session. Never before had India won an overseas Test after losing their first four batsmen for less than 50 runs. But then, seldom in the past had the team found itself in such a situation while a player of Pujara’s calibre remained undismissed at the other end. So what if he was alone? He would chop their wood, carry their water.

During and after the period of mayhem, Pujara took close to an hour to score one run, moving watchfully from 12 to 13. Caution isn’t a big deal in Pujara’s universe; just last year, against the same opposition in Ranchi, he had consumed 525 balls—the most balls faced by anyone in a single innings of Test cricket—in scoring a double century, 400 of those balls dots. Here, India and Pujara needed to set the tone, not match one like at Ranchi. So, he not only needed to steward the team out of the grave his colleagues had dug but also score enough runs on their behalf to get in the ballpark of a par score. The drop-in pitch at Adelaide threatened to hold firm deep into the game and not turn abrasive (it obediently did as told) and first innings runs were paramount.

The second best score in the innings was 37, by Rohit Sharma. Only two others got past 20 and both fell on 25. Pujara made 123, scoring a run every other ball. With bowler Ishant Sharma for company, the pair added 40 runs for the eighth wicket—Pujara, by now, dealing in boundaries. He spent two balls in his nineties, getting in there with a hooked six off Hazlewood and getting out of there with a boundary and a double. Then, he cut Mitchell Starc for a six on the off-side. Pujara had now hit nearly 20 per cent of all his career sixes in one innings. The counter- attack took both heart and balls, his intent was steel-like and fluid simultaneously and the result was a lesson in defiance.

At the press conference, Pujara was asked to rate his effort. “The way my teammates appreciated it, they were saying it was one of the best,” he said, humble to a fault. “It is one of my top innings in Test cricket. I would say top five.” The other four, whatever they were and wherever they were scored, hadn’t helped India win a Test match in Australia. The 123 built the foundations of victory, while his 71 in the second essay—an innings that set Australia a target of 300 plus—laid down the brick and mortar. Even if the remaining 10 men weren’t able to apply the finishing touches, Pujara, for once, wouldn’t be harassed on his ‘intent’. That much, he had assured.

KOHLI HAS AT his disposal the best fast-bowling pack the country has ever seen. Here’s a telling stat: the pace triumvirate of Jasprit Bumrah, Mohammed Shami and Ishant Sharma bowled at an average speed of 141.4 km per hour in the second innings of the Adelaide Test. I repeat, average. It was largely due to them (add to the mix Bhuvneshwar Kumar as well) that India managed to bowl out South Africa in each of their six innings during the Test series at the beginning of the year and, more recently, bowl out England in seven out of their nine batting innings.

Test cricket, however, sways to its own rhythms and, hence, laughs at slippery notions such as form and momentum. The penultimate day of the Test had ended with India only having to show up to win the contest on the final day—Australia still 217 runs adrift from the target and four of their specialist batsmen dismissed. But, when the hour arrived, Ishant bowled a no-ball on a wicket-ball here, Rishabh Pant (who caught a record 11 catches in this Test) dropped a catch there and now, the day was moving to the reverberations of Miles Davis’ trumpet—it ebbed and flowed and ebbed again and flowed some more.

And just like that, the Australian tail started gnawing away at the target, one mouthful partnership at a time. Mitchell Starc and Pat Cummins added 41 runs for the eighth wicket; Cummins and Nathan Lyon put on 31 runs for the ninth; and Lyon was left with Hazlewood for the last stand, Australia further needed 64 runs. Not too close, but close enough for the Indians on the field and the Aussies in the stands to feel the pinch. The crowd oohed and aahed, applauding dot balls and celebrating singles, while Kohli cussed and spluttered.

“It’s important to stay calm,” Kohli would say after the match. “The odds were stacked up against them as soon as we got Pat Cummins out. I wouldn’t say I was cool as ice but you try not to show it. It was just a matter of one mistake or one good ball.” That mistake was induced one ball before the tea break. Had Hazlewood blocked that R Ashwin ball, he and Lyon would’ve been rewarded with a 15-minute reprieve in the dressing room, where they would’ve pored over how to score the remaining 32 runs, having already scored between them the same figure.

But Hazlewood swished at it, the edge flew low to Rahul’s waiting palms and Kohli tore a hole in the sky, celebrating a rare achievement with his everyday sincerity.