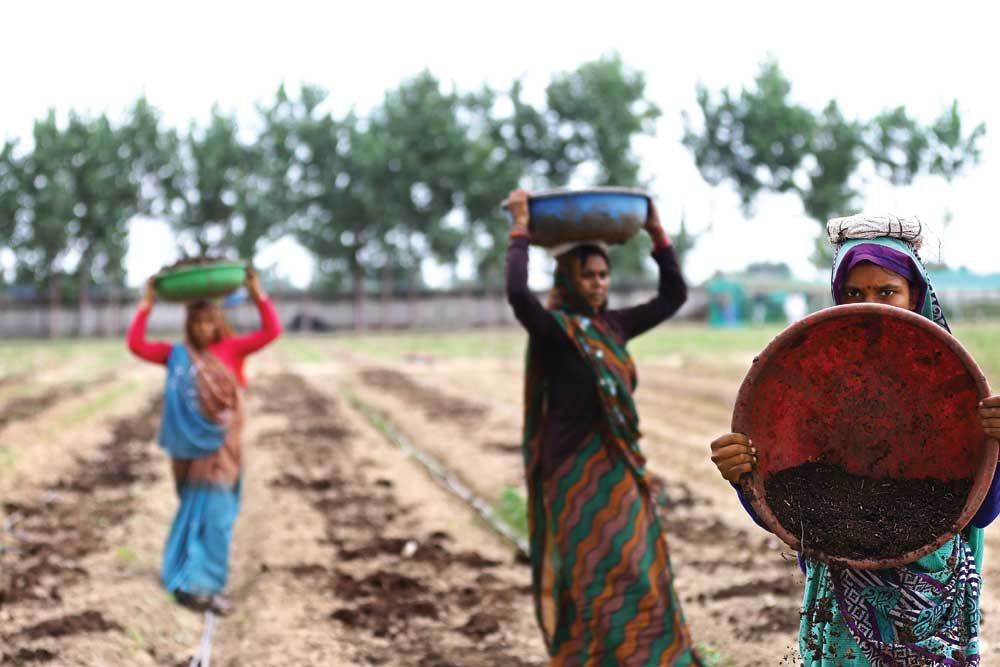 SHEETS OF BLUE glass are being affixed on one of many rows of high-rises built in the capital’s suburbs. Suddenly, the asphalt road ends. So do all signs of urban existence. Along a dusty road, a man lazes on a charpoy, smoking a hookah outside his Arcadian home that has eluded the gaze of builders so far. A few metres away, once you get past a large iron gate, the scene takes another turn. The cosmic mingles with the earth.

In the searing September sun, a tall man in a cap walks along neat rows of saplings. It is not the sun that bothers him; it is the moon, which is in the Virgo constellation— time for this biodynamic farmer to plant beetroot, carrots, potatoes, raddish and other root vegetables. But it’s a new moon and that’s a problem. “We avoid planting on a new moon because of low moisture levels. In India, pregnant women are often told not to go to hospital on a new-moon day,” says Sarvdaman Patel, “There is some belief like that.”

He is in his sixties and his eyes sparkle as he looks around the farm. There are winter crops being planted, green manure growing in alternate rows, women weeding out grass, a young biotechnology student trying to learn the ins and outs of biodynamic farming, and an electronics engineer attempting to bridge the gap between doers and thinkers. “In biodynamic farming,” says Patel, a leader of the movement in India, “we raise the organic content of the soil, not the plant. A sunflower should look like a sunflower. A cauliflower should smell and taste like cauliflower, and when you make a gobi ka parantha, its aroma should be wafting out.”

Patel, who runs a biodynamic farm called Bhaikaka Krishi Kendra near Anand in Gujarat, is here on a mission. He is here on this 17-acre patch of land off Noida Expressway in UP to impart his knowledge of a little-understood method of farming, to Anand and Aamir, who have turned their organic garden into an open-air laboratory of sorts. Anand, a graduate of Delhi University’s Shri Ram College of Commerce, is an apparel exporter. Aamir, a Fore School of Management graduate, runs a ballroom dancing school in Delhi. Their agricultural project, Rewild Life Biodiversity Farms, affiliated to the Bio Dynamic Association of India (BDAI) of which Patel is president, has been chosen as the ‘Demo Model Organic Farm’ for the Organic World Congress scheduled this November in Greater Noida, an event that Prime Minister Narendra Modi has been invited to inaugurate and is expected to have in attendance 2,000 delegates from other parts of the country and the world.

At a time when farms are being displaced by multi-storey structures all around, Anand and Aamir have decided to go back to nature in the midst of NCR’s suburbia. “We have come to appreciate the natural environment this place has provided farmers who once lived and worked in what was mostly agricultural land,” says Anand, “Our aim is to bring those times back at least here, in this farm, taking it back to an era when there were no fertilisers.”

Biodynamic farming, according to Patel, is what makes organic agriculture work. Drawn from concepts outlined by its Austrian pioneer Rudolf Steiner in 1924, it proscribes the use of chemicals on plants and soil and instead places emphasis on natural composts. In this, it is like organic farming. The difference is the alignment of its practices with the cosmos, with zodiac signs as guidance. Also, various biodynamic preparations to fertilise the ground are used in far smaller quantities than otherwise.

“Sixty years ago, we did not have chemicals and fertilisers. How did we live then? The famines in India were not because of drought, but because of lack of transportation,” says Patel, who has been doing organic farming for 17 years and is unhappy that the Government offers such methods “very little” support. “A large sum is given as subsidy to fertiliser farmers,” he says, “If that is given to organic farmers, you will see a change. A lot of farmers will start doing organic farming.” According to him, chemical farming accounts for 99 per cent of research done by universities and bodies like the Indian Council of Agricultural Research (ICAR). The success of Rewild, he hopes, will shift their disposition towards his approach. “My job is to show the way,” he says, “It’s no rocket science. There’s just hard work. [But] no one wants to do hard work.”

At Rewild, a stretch of 1.5 acres of land has over 40 different crops planted. This is an ‘allotment farm’, a plot for food grown for personal consumption with each family allotted a 30-foot bed. The sowing cycle depends on movements of the moon from one visible constellation to another. Patel says two polar systems are in use here: one of the earth and the other of the cosmos. Of the 12 major constellations, there are three each for root crops, flower, leaf and fruits or seed. When the moon moves into Scorpio, it will be time to sow leafy vegetables like fenugreek and coriander. Once it moves into Sagittarius, lady’s finger, spinach, tomatoes and aubergine will be planted, and fertiliser will be applied that day. “Up to around 80- 90 per cent [of it], I will go by the biodynamic calendar,” says Patel.

THE SOIL AT the farm is yet to get organic enough. Patel expects it to be ready in two years, and then instead of watering it every two days, it would require water every five days. The natural fertiliser, made up of whatever waste there is—mainly dry leaves, twigs and stumps covered with manure to help it decompose quickly—needs to be left for three months to turn into good compost. Patel admits it would be easier to just buy a bag of urea and spread it around. Besides, biodynamic food works out relatively expensive, costing around 15 per cent more than even organic food, which itself is costly.

While Patel has had his own organic produce back in Anand certified as authentic and of high-quality, he does not aspire to sell it abroad or even outside Gujarat. “I do sell it locally. Why would an organic man want to take the produce very far, which would require fuel to transport? Why should we look at the export market, unless you have 1,000 acres of coffee or tea? If you have just five acres, just look here. There will be so many people buying. Buying power has increased in India and people can afford what they could not earlier,” he says.

India has nearly 100,000 farmers practising some form of biodynamic farming, by an estimate based on sales of biodynamic preparations and self reports, according to Sundeep Kamath, secretary, BDAI. “Biodynamic farming is picking up in the country at a fast pace. There’s huge demand for biodynamic produce which has a shelf life longer by a day or two,” he says, “We are not able to meet it.” Major efforts are afoot. The SARG Vikas Samiti (Binita & Sanjay Roman), which has 30,000 farmers, for example, has made a million compost packs over the past decade. In Andhra Pradesh, the Naandi Foundation has around 20,000 farmers under its aegis. The group has worked with Araku Tribals to grow biodynamic coffee and floated Araku Originals, a set-up of which Anand Mahindra of the Mahindra Group is a trustee. As a brand of gourmet coffee, Araku Originals even has a shop in Paris. As for biodynamic tea, Modi had gifted Queen Elizabeth II some of the best Makaibari leaves from Darjeeling on his visit to London in 2015.

Gujarat, Madhya Pradesh, Uttarakhand, Uttar Pradesh, Andhra Pradesh, Kerala, Punjab, Karnataka, Tamil Nadu, Telangana, West Bengal and Assam are among the states where biodynamic farms are flourishing. Kerala alone has around 10,000 spice farmers using the technique. Across the country, says Kamath, there are 30 certified projects covering around 10,000 acres. He estimates the uncertified area at around 150,000 acres. This is just a tiny fraction of all agricultural land in the country, but for people like Patel, there is no looking back to the days of chemicals. “Those practising organic farming are moving to biodynamic methods,” says Kamath.

Though it is dubbed a ‘pseudoscience’ by its critics for its esoteric aspects, its advocates believe it is a thoroughly scientific method of getting the best crop. Cow horn manure, for example, is considered one of the best, says Patel. When a cow dies, its horns are taken and filled with the manure of a milch cow. After equinox till around early November, these horns are kept buried under 18 inches of soil. Steiner had said that cosmic inputs are received by horns and that the earth in winter breathes in. The cow dung is left in the horn for five-six months. In March, as the earth starts breathing out, it matures into such a power pack of compost that you need only 25 gm of it for an entire acre, stirred with 15 litres of water clockwise and anti-clockwise for an hour to suck in oxygen, an act that multiplies its millions of micro- organisms into billions, softens the soil, attracts earthworms and aids the cultivation of healthy crops.

The finer details are known too. Patel says actinomycete, a soil bacteria which causes the sweet smell of rain on dry ground, is found in high concentration in cow horns. This can be kept for two-three years and used in accordance with the ascent or descent of the moon for best effect. In summer months, silica, which absorbs the sun’s force, is crushed to a fine consistency like talcum powder, wettened and put in the horns. “This, you need just one gram per acre. It is sprayed in the air, not on the plant, to fertilise the air,” says Patel.

Other effective natural fertilisers include those made of horse manure because of the good diet the best-bred of them have, and of sheep droppings, which benefit from dietary diversity. Patel, for whom wasting land is almost a crime, believes nature has answers for everything. “My master is only vegetables, neither Anand nor Aamir,” he says. Each crop has its own regimen. Between two rows of tomato plants at Rewild are marigolds, which attract borers with their bright orange beauty. The insects lay eggs on the flowers, which are then plucked. Between the rows of cauliflower are spring onions, the strong pungent smell of which repels insects. The idea is to confuse pests. The alleys for walking along the cauliflower crop are filled with cluster beans, a legume which picks up nitrogen from the air and has a good biomass. Once ready, the beans are plucked and put into the soil next to cauliflower for them to become compost. Sunham is the other green fertiliser being used.

Ram Gopalan, an electronics engineer with Syven Global Services, is trying to encapsulate the knowledge on biodynamic methods in an effort to create digital guides. Given the diversity of India, where people speak different languages, he wants to bridge communication gaps. He does have concerns, though, about the mass adoption of his tools. How many would be interested? Patel usually has a full house of 50 people every December when he conducts an eight-day training course in biodynamic farming, but just about 5 per cent go on to pursue it.

Among those keen to learn is Subodh, a B-Tech student who has five acres of land off GT Karnal Road. “I want to use it to plant crops on that land,” he says.

It takes patience, however, as everyone around is aware. The sun is still in the sky, and biodynamic farmers must wait for the moon to make a move before the next saplings can be planted.