﻿Rhythm for the Blues 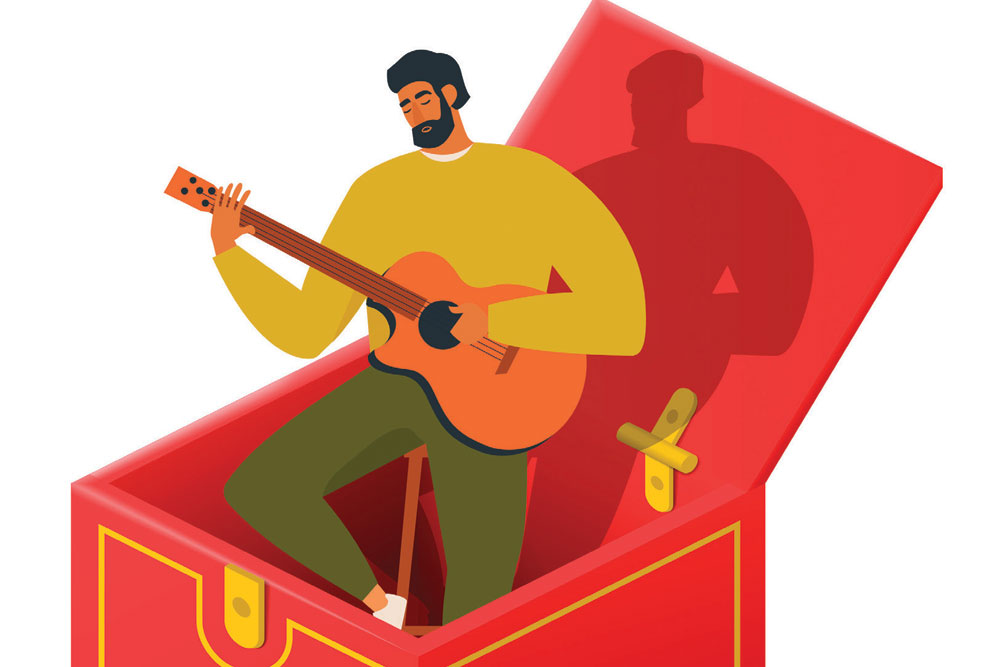 
A FRIEND OF mine has this tiny wooden music box. It has a lid on top, inside which lies its whimsical, turbine-looking machinery. When you wind the key on the side, it plays a 10-second fragment of some of the most haunting music I’ve ever heard. Pearly, dindong bells clattering into each other, forming a melancholic echo of the entire world. I wound and unwound the thing a few hundred times in the 10 minutes I had it in my hands. It sounded newer each time. In hindsight, I found through that little loop of music physical joy and hope—a sense of respite, of clarity, that I wasn’t even seeking.

These days—‘troubled times’, as we’re constantly reminded—there’s a lot of unexpected noise everywhere. Outside my house, these mini-tempos are patrolling while playing railway station music prompts followed by pre-recorded voiceovers explaining social distancing, like we’re in a bad dystopian novel. I turn on the TV and that’s a whole other world of manic farce. Every conversation—on Zoom or otherwise—begins with the virus. ‘Hope you’re well’ sounds almost like a taunt. The birds can’t seem to shut their mouths. My fridge makes an annoyed grunt at every minor electricity surge. The dogs in my neighbourhood have their own daily ragers happening post-sundown—they think they’re wolves. Every door slammed, every water tap turned on, every seeti from every pressure cooker gets amplified.

This superhuman hearing may be the result of the bubbling panic everywhere; a sense of dread and disquiet where everything is magnified. On top of that, I’m so bored. We all are. And it’s the adult kind of boredom, pompously called ennui—there are things to do, we just don’t want to do them. It’s exhausting.

Reflexively then, I’m leaning on music to get by; I need it now more than ever. Just to recreate, in some approximate way, the momentary delight of the music box. To shut out the outside world.

I find my brain instinctively stripping music off all its intellectualism. The wordsmithery, the songwriting and arrangement jiggery-pokery, the ‘craft’, the innovation, the concept, the sonic quality. These are all important—perhaps even essential—elements of the experience. But somehow, they seem to matter less to me currently. What I’m subconsciously searching is a physical experience; the primal, instinctual reaction that music evokes in the whole body. How it washes over you.

Perhaps the very way we’re listening to music is changing in real time. This happens every 10 years or so, though it’s usually propelled by technology and not a pandemic. But a collective shift happens. Like how, while growing up, a Chitrahaar on Doordarshan was the primary source for my generation: sitting in front of a TV, watching film clips, processing music accordingly. There was the radio, most often considered background activity. Tapes required listeners to be more present, sitting in front of a two-in-one, on guard to change sides or untangle the reel. The Walkman came along, putting music right in our ears, opening up physical spaces. CDs, which cost five times as much as a cassette, made the process yet more focussed.

And then, 21 years ago, the world changed forever with Napster and (illegal) peer-to-peer sharing of songs encoded in MP3 format. This was bootlegging, times a thousand. Tastes expanded beyond borders; we were no longer limited to what the TV or local music store had decided was good. And we kept adapting to each new development, creating habits and memories dictated by external influences.

Most recently, in the streaming age, tastes were being shaped by maths. Artists trying to game the system. Listeners, crippled by the paradox of choice, playing it safe. No one getting any money anywhere. The algorithm staging a coup.
Now, with the coronavirus, there’s a reset of sorts happening.

With a pandemic threatening to wipe us all out in slow motion, people are looking for comfort and solace—the kind only art can provide—far more than thrill and all its ephemera. Great music moves you in mysterious, indeterminate ways, but it also demands submission, sacrifice, attention. Even as our brains are racing and we’re unable to concentrate for more than a few minutes at a time, the process of music listening—in aspiration at least—has become more concentrated and singular, more active. It’s become more intense.

For the past month or so, ever since the world took its bat and ball home and shut itself down, the music community has been facing the kind of setback best described as FUBAR (fouled up beyond all recognition). The list of lives claimed by the coronavirus is a long and increasing one, with the great country artist John Prine being one of many tragic losses. No gigs or concerts for about two years—the primary, or reasonably, the only source of income for numerous artists—coupled with projections of a worldwide recession and an understandable paranoia about crowded spaces that’s set to last much longer than this infinite disease will means the situation is grim.


This flurry of activity in the music world is a fundamentally noble endeavor. It’s a back-and-forth of much-needed kindness between listeners and artists

But there’s something exciting, heartwarming happening at the same time too. Perhaps more than most, the community of musicians and music-adjacent individuals understands the value, in such a time, of music that people can latch on to for momentary peace. It’s why an album like Fetch the Bolt Cutters, the spectacular new release by Fiona Apple after an absence of eight years, has been received not just with widespread praise but near universal untamed adulation. We’re all looking for positivity and hope, for that unique communication between artist and listener through song. It’s magic.

Remember Gal Gadot getting all her A-lister, celeb friends to contribute to that insufferable rendition of John Lennon’s ‘Imagine’ a few weeks ago? Ridiculous as that was—and a reminder that famous people can be aliens—the underlying message was one of undiluted hope. Bandcamp, a great resource for indie artists who can stream and sell their music directly to fans with zero fuss, has waived its fees—the company charges a percentage on every sale—on two different occasions already (one day each in April and May), allowing fans the opportunity to do some good and support struggling musicians, while at the same time discover exciting new music. OK Listen, the Indian digital platform for artists to sell their music, also waived its fees for all of April, with all revenue going to the artists.

Bigshot bands like Radiohead or Pink Floyd have been putting out archival footage and live concerts for fans to watch for free. Many artists have sped up their releases for their fans, leading to action-packed Fridays. We’re getting absurd Skype/Zoom/Houseparty collaborations, lost B-sides, unfinished scratches; musician Patreons and Bandcamps are overflowing with corona-jams. We even have a brand new concept in place: livestreamed home concerts—artists, both Indian and foreign, are sitting in their living room with their gear, broadcasting a video of themselves which their fans on Instagram watch on with love.

Sure, some of these may well be publicity-grabbing stunts and gimmicks, but at its core, this flurry of activity in the music world is a fundamentally noble endeavour. It’s a back-and-forth of much-needed kindness between listeners and artists. An endless hunt for catharsis.

Pre-virus, as a general rule, we all heard music with a sense of grounding. But now we’re in an age where that foundational underpinning no longer exists. In its place is perpetual uncertainty. A feeling of restlessness. Music, on a good day, affects humans in such profoundly abstract ways, relying on unknown variables. But now we lack even that flimsiest of context. Things we grew up with, sought calm and reassurance in, no longer sound the same. We are, on some level, discovering a brand new way of absorbing and processing music—through old songs or new— creating fresh memories in unprecedented times that we were never supposed to deal with. The ineffable ‘feeling’ that comes with it—the music box—exists, we know that, and we’re now learning how to get there again.