Walking With the Enemy 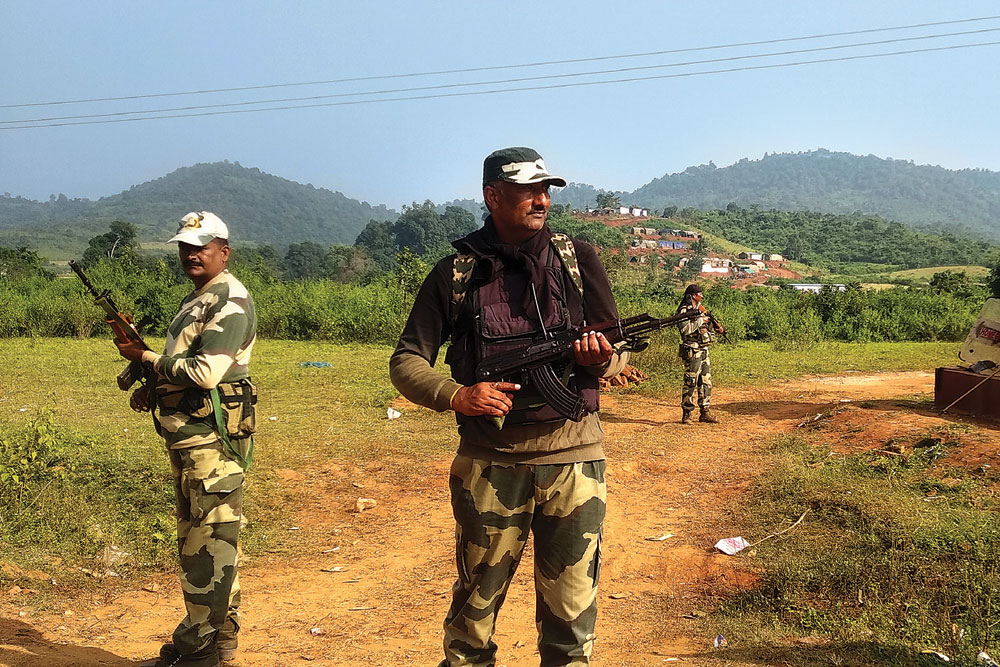 A BSF patrol near Gurasethu village in Malkangiri District


ON NOVEMBER 23rd, personnel of Odisha Police’s Special Operation Group (SOG), Border Security Force (BSF) and Greyhounds forces launched a massive anti-Maoist operation in the Totaguda forest area of Malkangiri district. This area in the district’s Chitrakonda block is hilly, surrounded by the Balimela reserve on three sides and Andhra Pradesh on the fourth. Maoists have been active here since the 1990s. Consisting of 151 villages, it came to be known as a cut-off area as one had to cross a river by boat to reach here from the rest of Malkangiri.

In 2018, a bridge was built on the river Gurupriya, after a delay of 26 years. Chief Minister Naveen Patnaik then rechristened the area as Swabhiman Anchal (Pride Zone).

On the night of November 26th, a group of SOG involved in the operation in the area’s northernmost tip came under fire from a Maoist squad. It was raining hard and the SOG decided not to engage. A little ahead, it came under fire again from the Maoist side. This time, the SOG team returned fire.

As the firing ebbed, the police party went ahead and found the body of a Maoist guerrilla. He turned out to be Kishore, a platoon commander of the CPI (Maoist)’s Andhra-Odisha Border Special Zonal Committee (AOBSZC).

As they carried the body, the SOG party came under fire for the third time from a retreating squad of Maoists. After a heavy exchange of fire that lasted about 40 minutes, there was silence on the other side. The Maoists, the SOG felt, had retreated in the face of their superior firepower.

As the team planned its course of action, the police personnel suddenly heard a feeble voice coming from the other side. “Please don’t shoot, I want to surrender,” it said in Odia.

“Initially, we were wary of foul play. But we wanted to give him a chance,” the SOG team leader, whose name has been withheld due to security reasons, told Open. He replied in Odia and asked the Maoist to come out with his hands held up.

After a while, a man appeared in front of them. The SOG men kept speaking to him in Odia. As he came nearer, they saw that the man was wearing military fatigues worn by Maoist guerrillas and that his hand was bleeding profusely. As they got hold of him, he was searched thoroughly.

The man turned out to be one Laxman Golari from Jodamba village of the same area. He said he had joined the Maoists as an active member 10 months ago; before that, he said, he had been a part of their militia for five years.

Golari had lost a lot of blood and he was not wearing any warm clothing, which made him shiver. One of the SOG team members then offered him his jacket. They bandaged his wound and gave him ORS and some vitamins from their medical kit.


But Golari needed proper medical attention. The problem was that the nearest hospital was in Malkangiri town, 160 km away. The area had a considerable Maoist presence and the terrain was hilly with no proper road.

In the darkness of night, the SOG team began their journey towards the hospital.

“I received a call from their satellite phone and immediately set to work out a way so that we could make him reach the hospital as quickly as possible,” said Malkangiri’s superintendent of police, Rishikesh Khilari.

Meanwhile, the team kept walking with the injured Golari. By this time, he was a little assured that he was safe. He kept speaking to the party. “He told us many inside the party wanted to surrender, but they feared reprisal. However, maybe his story could inspire others,” recalls the SOG leader.

The party had to negotiate a rough stretch of 30 km on foot, which took several hours. By that time, a motorcycle had been arranged. Golari was then carried on the bike for another 30 km. At this point, an ambulance was waiting for him. The rest of the 100 km journey was undertaken like this.

Golari was treated at the district hospital and is now fine.

Operations like these have been made possible after the bridge over the Gurupriya river, almost a kilometre long, was built, ending the area’s isolation. It is here in 2011 that the then district collector of Malkangiri, R Vineel Krishna, was abducted by Maoists (and released later). In 2008, the Maoists had attacked a party of specialised anti-Maoist Greyhounds forces, killing 38 of them. Eight years later, the Greyhounds had sneaked upon a state-level meeting of the CPI (Maoist), killing 24 of them, including several senior commanders.

Operations like these have been made possible after the bridge over the Gurupriya river was built, ending the area’s isolation. It is here in 2011 that the then district collector of Malkangiri, R Vineel Krishna, was abducted by Maoists. In the last two years, Maoist strength has suffered a significant setback. Three months ago, mobile towers came up for the first time. There are now two police stations. In January, an 11 km road was completed in just five days

In the last two years, Maoist strength has suffered a significant setback in the area. “About 75-80 per cent of the area is now under direct police presence,” says Inspector-General of Operations, Odisha Police, Amitabh Thakur.

About three months ago, mobile towers came up in the area for the first time, enabling 4G network. Earlier, the place had no mobile towers of its own and was in a network shadow zone.

NOW IT HAS two police stations while the BSF has established three COBs (Company Operating Bases), including one recently made operational on November 1st at a place called Gurasethu, once an area completely dominated by Maoists.

In January this year, an 11 km road was completed in just five days under constant police protection, connecting five panchayats in the area. Later that month, two Maoists came to a village on a motorcycle and fired in the air to terrorise them. They asked the villagers to oppose the road construction. The enraged villagers attacked the duo with stones, killing one of them, while the other, badly injured, was later arrested by the police. In retaliation, Maoists set several houses on fire the next morning.

SP Khilari, who has in the past few months made it a point to stay in the area, says that the police presence has assured the villagers who are now realising that it is bringing them close to a better life. “A lot of administration work in the area is now done through police stations,” he says, “We are facilitating borewells, alternate cropping, school admissions.”

The development work is paying dividends. In villages where residents supported Maoists, recruitment has fallen to almost nil. This year, nine local cadres have so far surrendered to the police. “The villagers are fed-up with Maoists and their extortion,” says Khilari, “This year, we have had several covert actions of Maoists revealed to us by villagers who want them to go away.”

In several villages, the Tribals have now begun night patrolling with traditional arms to prevent Maoists from entering. “From all quarters now, the Maoists are feeling the pressure. It is the end of the road for them,” says IG Thakur.