When she agreed to teach the legendary English singer Hindi in the 1970s, India scholar Natalya Sazanova had no idea who the Beatles were. Over four months of lessons, George Harrison preferred to keep his fame a secret 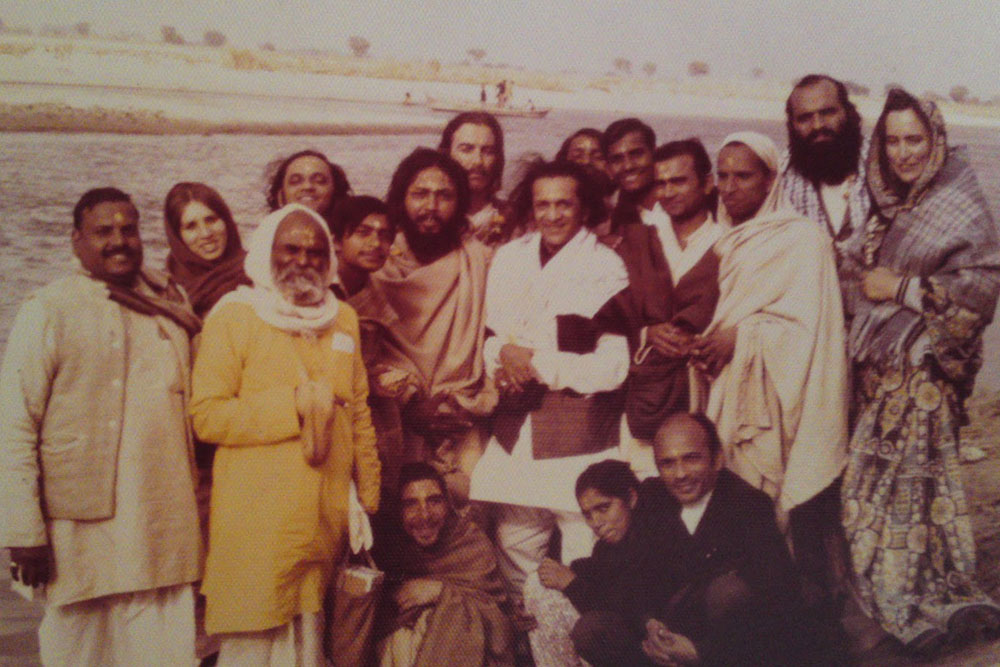 
On an otherwise uneventful day in Vrindavan in 1974, Natalya Sazanova, a Russian Indologist with a deep interest in Hinduism, was introduced to a “charming young” Englishman by sitar maestro Pandit Ravi Shankar. Decades later, Sazanova, who was one of the best-known professors at the Lomonosov Moscow State University, would tell Russian newspaper Novie Izvestiya in an interview that the young man, who had a ponytail and was wearing a “checkered American jacket and Indian sarong” listened closely as Ravi Shankar and Sazanova spoke in Hindi.

The Russian was so proficient in Hindi that she had defended a thesis on the work of Hindi playwright Bharatendu Harischandra for her candidature of philological sciences degree (equivalent to a masters in philosophy) in 1962.

“George,” who did not understand what the conversation was about, asked the Russian Indologist to teach him Hindi.

“He had an absolute talent,” Sazanova said. While most of her students took about six years to master conversational Hindi, the Beatle managed to learn well in just four months of “irregular” classes. “George grasped the spoken language on the fly. He particularly learnt bhajans fast and sang them.”

Sazanova was also mesmerised with how George mastered the sitar so quickly. “I was so impressed that I asked him, ‘George, what do you do for a living.’ He was terribly embarrassed [by that time, he was world famous]. He said, ‘Actually, I’m a professional musician.’” She added that Ravi Shankar smiled when he heard this.

The teacher, completely ignorant of her student’s fame, asked him to keep a small concert, to which he agreed. “One of the concerts that George and Shankar arranged for several friends, including me, was on a moonlit night in a deserted spot on the banks of the Yamuna River,” Sazanova said. “It was simply amazing. The three of them played—Ravi Shankar, George and an Indian flautist—and I hadn’t heard anything like it before.”

Unfortunately, there were no recordings of the concerts. “Tape recorders were still rare at that time,” Sazanova said. “Today, I am very sorry that at that time I did not have any device. The only thing left are photo slides.”

At that time, Sazonova and Harrison were both pursuing their interest in Hinduism. The Russian’s spiritual guru Sripad Maharaj also had an influence on the Beatle. Harrison’s song It is He (Jai Shri Krishna) was based on a bhajan taught to him by Sripad Maharaj.


Sazanova recalled how spirituality and Hinduism always came up during their lessons. “We could not get around philosophy in conversations with him, but I was engaged in Hare Krishna bhakti,” she said. “As much as I could, I explained to George the connection of music with bhakti. I explained that since everything in the world was connected, words and music could not exist separately.”

Harrison, who was well versed with the Bhagavad Gita, chanted the Hare Krishna mantra, and regularly communicated with Srila Prabhupada, the founder of the International Society for Krishna Consciousness or ISKCON, as it’s popularly called. “More than once I attended their meetings and I can say that George always listened very carefully to what the guru told him.”

Harrison never spoke of his fame or international stature during those four months. Once their lessons were over, he wrote a small note in Sazanova’s diary. “I was extremely happy to meet you. You made a tremendous impression on me. God Bless You.”

Sazanova did not make too much about her lessons in Vrindavan and thought of them as nothing but one of many pleasant experiences in the country that she had dedicated her life to understanding.

Back in Moscow, she shared her photographs from her time in Vrindavan and then came the excitement. “Oh My God! This is Harrison,” a student screamed. The students then went on explain who the English musician learning Hindi was. They were impressed out of their wits when they heard that George Harrison actually dedicated a song to their teacher at one of his small private concerts by the Yamuna.

It’s a myth that the Beatles were officially banned in the Soviet Union. While anything associated with Western culture was looked upon with great suspicion, there was no Brezhnev-era government call for citizens to not listen to the British band. One of the major reasons that the music of the Beatles wasn’t easily available in the USSR in the mid-1960s was the hostility and envy of Soviet composers. Russian composer Nikita Bogoslovsky once referred to the band as the “dung beetles”.

However, John Lennon’s statement that the band was more popular than Jesus Christ was welcomed by the ideological newspaper Pravda. By the time Sazanova was back in Moscow from Vrindavan, her students would have most likely listened to a poor quality record that was sold by a company called Melodiya. The album cover didn’t have the name of the band but chose to call them a “Vocal Instrumental Ensemble.” Muscovites could also hear the Beatles music on Radio Luxembourg.

The message in Sazanova’s diary and her photographs became the talk of the university in 1975. On hearing that her student in India was a legend in the world of music, she started listening to the Beatles and Harrison’s individual songs. She also listened regularly to her student’s songs that were dedicated to Krishna.

Harrison did not forget his Hindi teacher after he went back to the West. He sent Sazanova a book about Krishna, where he had written the preface. The preface ends with words familiar to each and every fan of the Beatles: ‘Give peace a chance. All you need is love.’

An Illustrious Career in Indology

Sazanova continued her scholarship of Hindi and Sanskrit literature for the next three decades. In 1984, she obtained a PhD by defending a thesis on ‘The Creativity of Surdas and the North Indian Literary Tradition of the 16th to 19th centuries.’

She also cultivated a close friendship with Russian-Indian artist Svetoslav Roerich and his wife, actress Devika Rani. She was on the board of the Moscow Nicholas Roerich Society from its founding in 1980 till her death in 2006.

Sazanova remained a lifelong devotee of Krishna. She was grateful to Harrison for the role he played in popularising Hinduism in the West. In her interview to Novie Izvestiya, she said movements such as “Krishnaism” gave non-Indians the opportunity to access ancient spiritual systems. “Doesn’t George’s sincerity reflect in the (spiritual) songs he composed,” she asked.

Once the Soviet Union collapsed in 1992, there were no restrictions of any kind on cultural and musical imports. Along with the growth of popularity of their music, rumours resurfaced of the Beatles actually performing in secret in the Kremlin in the 1960s. Some fans still erroneously believe that the song Back to the USSR was inspired either by this “secret performance” or after another (falsely) rumoured visit of the Fabulous Four to Moscow on account of an emergency landing.

When the story of a Moscow State University professor teaching George Harrison Hindi once again began to do the rounds in the Russian capital in 2005, journalist Ekaterina Maksimova, then 18, decided to check if it was a hoax. “It was very difficult to believe the whole story, so my friend and I decided to try and get in touch with Dr Sazanova,” Maksimova says. “We went to the Moscow State University to find her. She was still a part of the faculty of the Institute of Asian and African Studies.”

On hearing that the girls wanted to know more about the Indologist’s experiences with George Harrison, she invited them home. The excited students went to Sazanova’s home on Russian Orthodox Christmas (January 7th) morning in 2006 and saw some photos and the diary. “Some sceptics have raised questions over the authenticity of the autograph, but I have no doubts,” Maksimova says. “George Harrison had a very unique signature; he used to write his name in a very characteristic manner.”

Over cake and tea, Maksimova and three friends spoke to Sazanova in detail about her interactions with Harrison. “We just sat there, pouring in the questions, still in disbelief that George Harrison’s teacher was sitting in front of us,” she says. “It was unreal. It doesn’t happen… We were so excited that it turned into an interrogation about George.”

Even after three decades, the Russian Indologist was in awe of the music legend’s humility, sincerity and manners. “I remember her telling us several times during the conversation that George was polite and modest,” Maksimova says. “She also told us that he took the lessons very seriously and spent a lot of time praying and reading and citing religious texts.”

Sazanova also spoke of her guru Sripad Maharaj, her passion for Hindi literature, Sanskrit and Hinduism, inspiring Maksimova to enrol at the Moscow State University’s Institute of Asian and African Studies. She studied Hindi, Sanskrit and Urdu and specialised in Chhayavad-era literature, but unfortunately could not study under Sazanova.

Although Sazanova was still a member of the faculty of the Moscow State University, she was too weak to travel daily to the campus in 2006. A handful of students would go for lessons to her apartment, which was in southwestern Moscow.

“When I called her home in June 2006, her son told me that she had passed away,” Maksimova says. “It was a terrible shock for me. I had always loved India, but I found out about the Institute of Asian and African studies only because of her… But more than that, the very idea of being a student of the same teacher who taught George Harrison, was thrilling. It would almost feel like being his classmate.”

Maksimova, who now works for a leading private television channel in Moscow, is a regular visitor to India and has often contemplated organising Beatles tours to Rishikesh and Vrindavan for Russians.

The transcripts of George Harrison’s interviews about Indian culture and Hinduism have been widely translated into Russian. Ardent fans of the music legend in the country take great pride in his Russian connection and the fact the he was in a way a bridge between Russia and India.