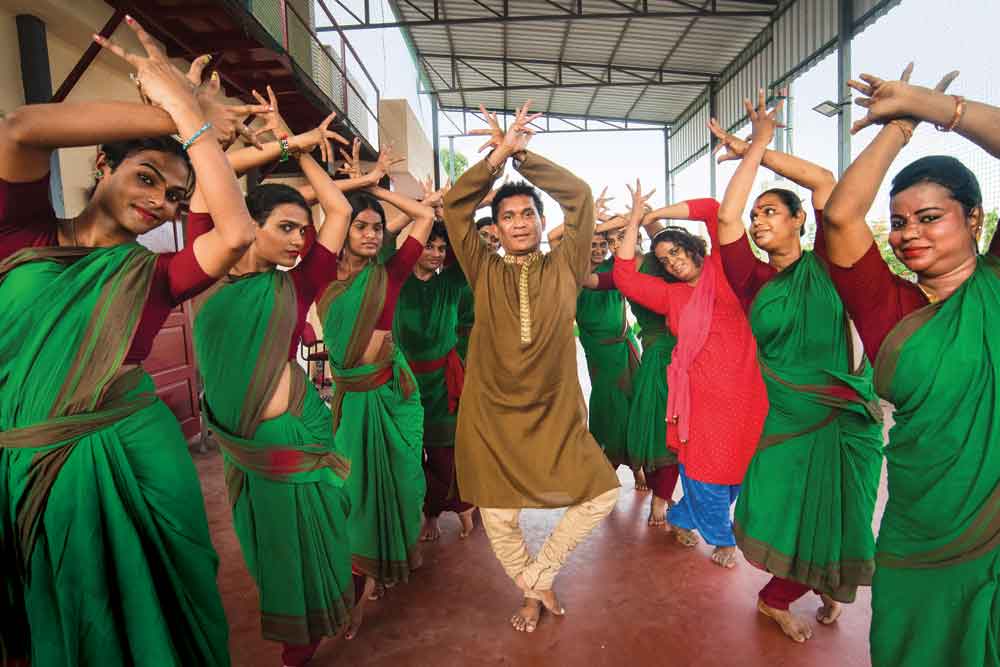 
SINCE JUNE 5, every Sunday, at 4.45pm, on the terrace of the NAC Founda­tion in Chennai’s Aminji­karai, off Nelson Manickam Road, a group of 17 transgender persons, from across the city, gather to share a common interest—a love for dance. Es­pecially Bharatanatyam. The weather is typically Chennai, hot and humid, but no one seems particularly hassled by it; the group sits around, catching a breath, sharing stories and exchanging notes on their week gone by and of what lies ahead; there’s a palpable sense of excitement.

On a chair, watching them ready for class, is Bharatanatyam dancer-chore­ographer-teacher, Shanmuga Sundaram, a student of Bharatanatyam artist and teacher, KJ Sarasa. In Shan­muga’s smile—and it’s one that reaches his eyes—you not only spot pride at initiating a group of transgenders into Bharatanatyam, but you also see respect, dignity and empathy. “You see, as a male dancer, it hasn’t exactly been easy—even for me—to find my feet in this world of Bharatanatyam,” Shan­muga says, “But that’s another story. Let me just say that I know what struggle feels like.”

We meet Kayal, whose hometown is Tirunelveli, and who lives in Chennai’s Saidapet area, and who grew up on a hearty dose of watching dance on televi­sion. “I particularly loved watching Jyo­tika in the Tamil film, Chandramukhi… you remember that dance sequence,” they say, “Wherever and whenever that song would play on TV, I’d be mesmer­ised. The opportunity to learn dance for me is like a dream come true.”

Tamil Nadu, the home of Bharatan­atyam, is also considered a pioneering state for transgender rights in India. This one-of-a-kind initiative attempts to create a professional, safe and non-judgemental space where the marginal­ised have the possibility of finding joy in dance. This initiative signals yet another progressive and heartwarming move in the state to tangibly translate ideas of inclusivity and diversity into action.

Credit for this idea goes to the Sri Sathya Sai Orphanage Trust, Kerala, that backs the project financially and to Sahodaran, a Chennai-based organisa­tion that was founded in 1996 and works for the welfare of LGBT+ communities. “I’m really so excited that despite having to travel to class from afar,” says Sunil Menon, founder, Sahodaran, “the group is continuing to show up every Sunday. From the look of it, they seem to be loving it; the fact that they can set aside the baggage they are forced to carry, even just for a bit, and be in the moment, is just so heartwarming.”

A year ago, Rashika and a group of their friends moved to Chennai from Tuticorin in an attempt to make it in the city; their first stopover was Sahodaran. “With no support of any sort from parents or from society, we found acceptance and a sense of belonging at Sahodaran,” Rashika says. “Dance was always on my mind. I asked a couple of teachers to take lessons, but they sent me away saying the class was strictly only for girls. This class seems so safe, and I’m so happy here.”

Since the inception of the classes, the young students have learnt ‘Guru Van­akkam’; (paying obeisance to the guru) and the basics of movement vocabulary in Bharatanatyam. Within the group, the diversity is sparkling; we meet one of the country’s first transgender physi­otherapist, Selvi. There’s a student of Chartered Accountancy, Nisha, whose sister is a dancer but who was never been allowed to get up on stage but who still managed to, without the knowledge of her parents; there’s Kamli who works in the administration department of a government hospital by day, and writes poetry and novels by night and who is busy almost every weekend attending events where she is either addressing an audience or being felicitated for her contribution to Tamil literature; there’s Vishali, who works in the banking sector after earning a degree in engineering and there’s Deepika, who does odd jobs to make ends meet and who has battled many a storm—both as a child and as an adult—to gain acceptance in a society that continues to alienate and ostracise the weak and the vulnerable.


“With no support of any sort from parents or from society, we found acceptance and a sense of belonging here,” says Rashika, dance student

Deepika tells us horror stories of how her mother would hit them when they’d dance to the tunes of the famous song, ‘Naan Sirithal Deepavali’ from Kamal Haasan’s movie Nayakan. Deepika’s abhinaya (art of expression) is real and spontaneous; but Deepika was never allowed to dance until one day, finally, they managed to make it to a reality show and even won a prize. “I just learnt dance from watching films,” they say, with shy confidence, “I think it’s a gift of god.”

Bharatanatyam, in its form and content, isn’t an easy art form either. We ask Shanmuga if he has modified his teaching, especially for this group. “Not really,” he clarifies, “The grammar of Bharatanatyam is set in stone and I’m not compromising on that at all.”

Within the group, there are inspira­tions aplenty. There’s Vaishnavi, one of the first transgender auto drivers and activists in India, who uses their spare time advocating for equal rights for the third gender. “I’m in a space where I can help and I’m happy to be a role model for those still struggling to come into their own in a world that is particularly hostile to the fragile,” Vaishnavi says.

In terms of transgender rights, Tamil Nadu has taken significant steps. In 2008, the state set up the country’s first welfare board for transgender persons. Nearly seven years ago, the Tamil Nadu government allocated nearly 500 housing board apartments to transgen­der persons free of cost. The state has also been the first to introduce the option of the third gender in college application forms. In April this year, it was announced government hospitals in the state would carry out gender reassignment surgeries. “What we have achieved in terms of real, tangible initiatives at the grassroots’ level is fantastic,” Menon adds.

THESE PROGRESSIVE measures have been helped to a great extent by those like activists P Sudha, who founded the Indian Transgender Initia­tive nearly 10 years ago, and is commit­ted to the cause of ensuring dignity, equality, rights and opportunities to transgender persons. “Tamil Nadu is definitely ahead when compared to other states in India,” she says, referring to overall rights for transgender per­sons. “More recently, the State Planning Commission included Dr Narthaki Nataraj as its member. As you know, Dr Nataraj is such a huge inspiration for the transgender community having earned for herself a Padma Shri for her contribution to Bharatanatyam.”

Yet, Sudha acknowledges that the path ahead is still stony. “Their life isn’t easy at all,” she says, “They are physical­ly and emotionally disturbed and our efforts are towards helping them find opportunities for education, employ­ment and acceptance in society.”

Towards that effort, in October this year, Sudha and her team are organis­ing a three-day conclave exclusively for transgender persons that focusses on higher education and other employ­ment opportunities that will ensure the marginalised enter the mainstream. “Initiatives like the Bharatanatyam dance class,” Sudha adds, “are efforts to­wards that end. If the response is good, we plan to introduce the second batch soon.” But for now, in a corner of old Chennai, the sound of students learn­ing dance every Sunday will continue to fill the air.