‘There is a sinister plan to distract people, but rule of law will prevail‘ 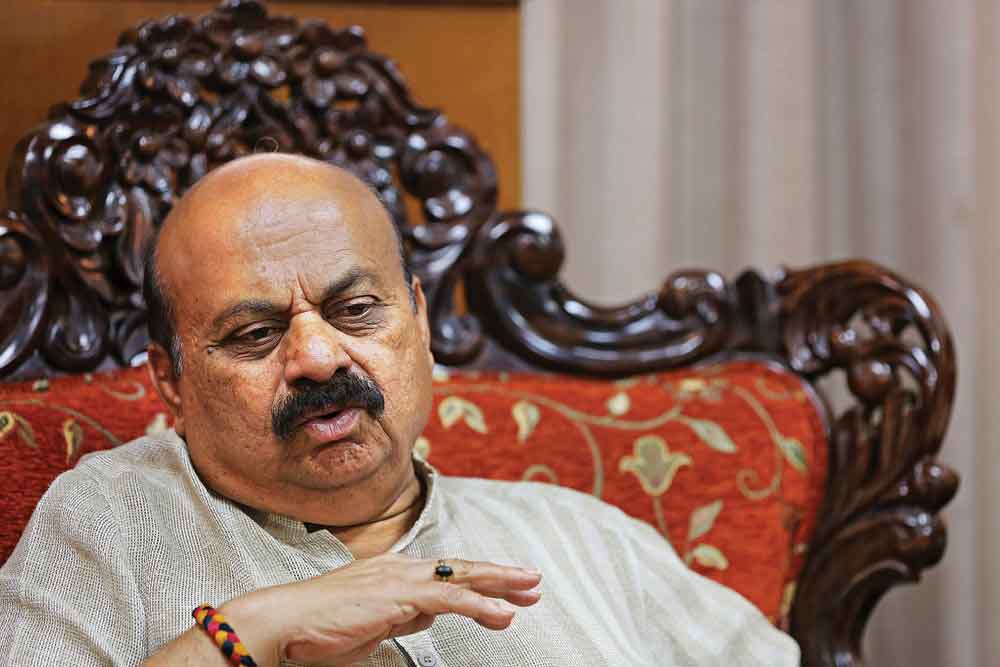 
You have completed a year in office. It has been a chal­lenging time as Covid remained a worry and there were other concerns on the law and order front. How did you organise your priorities?

When I took over, Covid was tapering down but the economy was fragile. We had a `5,000 crore deficit in our collections. I concentrated on the finances of the state. The net result of urgent supervision is that, by the end of March, we covered the `5,000 crore and collected `15,000 crore more than budget esti­mates. With finances back on track, development work could be taken up. The second thing was the occurrence of floods. The response was very quick and all ministers and MLAs were on ground and the government machinery went to work. We used the National Disaster Response Force (NDRF) and State Disaster Response Force (SDRF) for rescue. I have given relief to farmers double the NDRF (fund) norms. We gave `13,800 for dry farming; the same was doubled for irrigated land and plantations. Then the third wave of Covid began in January and we controlled it in one month.

How was the response framed? Through call centres, tracking of cases?

We made good use of technology. Tracking, testing, and treatment. We were able to track and trace even after cases began to rise. We linked this to management of hospitals and bed availability. We simultaneously pursued our vaccination targets. You can say we were working along the principles set by Prime Minister Narendra Modi.

Then came the challenge of the budget. I increased the outlay by `20,000 crore. We were confident in our plans and targets. I think I have been able to provide a new initiative for Karnataka’s development.

In recent days, the prime minister has spoken a lot about “saturation” coverage of government programmes. How have you implemented this objective?

First, to speak of saturation coverage is not easy. The prime min­ister has done so. Earlier no one has dared to aspire, to set such goals, let alone achieve such objectives. This is the idea of the new India he speaks of. We have taken this seriously. We have “saturated” coverage of farmers under Kisan Samman Yojana. We are reaching 100 per cent under the Jal Jeevan Mission and should achieve this by next year-end. We will similarly imple­ment the Ayushman card, including new schemes, by the end of the financial year. So health, drinking water and farmer wel­fare are priorities. We will saturate most schemes except some wherein banks are involved.

You took over from BS Yediyurappa, one of the tallest leaders of Karnataka. Did you feel overwhelmed about stepping into such big shoes?

Perhaps not overwhelmed, but I was quite aware that the shadow of a very big leader would be there. His leadership and performance will be seen as a landmark. I knew I had to perform under his guidance and also take Karnataka to newer heights. I look at the prime minister’s career, how he performed when he was chief minister and targeted growth in Gujarat, as a model.

Karnataka has done well in the NITI Aayog innovation index. It has a reputation as an innovation hub. What are your plans to ensure it maintains its lead?

It is not only in IT and such areas. There are 400 renowned in­ternational R&D centres in Bengaluru. Right from genomics to aerospace. They are in different fields—agriculture, horti­culture, sericulture, pharma, power and defence as well. That is how the innovation rankings have happened. I have an­nounced a new R&D policy where we will encourage R&D at all levels, from the individual to the institution. It will be a first.

Despite being such a centre of entrepreneurship, Benga­luru’s infrastructure has suffered over the years.

See, this infrastructure (problem) has come to me as a legacy issue. I have taken this as a challenge, especially the roads in the city. Every day, 5,000 new vehicles are hitting the roads. No other city faces this problem. Imagine the burden. There are more vehicles than people in the city. The challenge is to re-plan traffic through seamless signals and avoid intersections while new corridors are needed. The permanent solution is to have four satellite towns with modern facilities and very good mobility between the centre of Bengaluru and the towns. That’s what I am planning.

How do you see the political situation in the state? The opposition Congress has repeatedly accused the gov­ernment on issues like corruption, Hindutva, changes in textbooks, and the role of the Rashtriya Swayamsevak Sangh (RSS).

Congress is a big failure. When the party was in office, it was un­able to deliver and the people threw it out of power. Therefore, a sinister anti-Bharatiya Janata Party (BJP) campaign is their agenda. So they try and find fault with any new initiative we take up. But people are not interested. They speak of corrup­tion but Congress is the most corrupt party. It is the Gangotri of corruption. They have institutionalised corruption during their rule but want to talk of corruption. Whenever any inci­dent has occurred, we have had an inquiry and the guilty were punished. In the PSI (police sub-inspector) recruitment case, it is our government that ordered an inquiry. We filed cases, ar­rested people, chargesheeted them; among the first arrests was a BJP sympathiser. So, we don’t compromise on corruption. A lot of Congress people are in jail on such charges.

There was an investigation into the hijab controversy too. What were the conclusions or findings?

Yes, the Popular Front of India (PFI) and the Social Democratic Party of India (SDPI) were behind the trouble. It was five girls who initially raised it but the matter blew up in a certain man­ner. But we handled it without falling into their (PFI and SDPI) trap. I did not see it as a communal issue but there was design all right. We said the law must be followed—the school dress code law that has been there since the 1980s. The government passed the order and it was upheld by the high court.

But what was the design that you mentioned?

They want to place hurdles in the way of all development work by diverting the attention of the people. In fact, the appease­ment politics of Congress is at its peak in Karnataka. That was the design. But I followed the rule of law. In the loudspeaker case too, there was a Supreme Court order. It had to be followed. I don’t take sides.

You have emphasised development of schools and farmers, and particularly children from farming families. Can you explain what you have in mind?

I speak of three Es: education, employment, empowerment. It can be seen that the size of land holdings with families has not increased but dependents have gone up in number. Depen­dency on farm land has to be reduced. Families where children have found other professions have done well. The government helps in this process. Scholarships are being given to children from Class 8 to the postgraduate level.

Water disputes have been a lingering problem. What is the situation after the Supreme Court ruling on the Cauvery award?

The interstate water dispute Act itself needs to be amended. It has only created more disputes. The Bill to change the law is in Rajya Sabha. Being a mid-riparian state, Karnataka has been entangled in disputes with upper and lower riparian states. Cauvery water award is notified; the water to be given to Tamil Nadu is ensured and there is a Cauvery river water management board. What is left after the release (of water), is Karnataka’s right. That is what the tribunal says. Bengaluru is a big cosmopolitan city where drinking water is a big issue. We are going to have a small reservoir (Mekedatu) that will solve the problem. In a distress year, this can benefit Tamil Nadu as well. However, in Tamil Nadu, Cauvery becomes a deep politi­cal issue. But then, the courts are there for justice.

Karnataka has suffered from regional imbalances, with the north seen as drier and less prosperous.

Thanks to Congress, these differences persisted. There was the Nanjundappa report (submitted in 2002) and Congress allowed it to gather dust for five years. Ultimately, it was Yediyurappaji who began to implement it. Now, we have taken big steps. In Hyderabad-Karnataka, the special funds have been doubled. Education, nutrition, and women and children welfare are focus areas. We are getting industry cluster and the Mumbai-Bengaluru corridor will help Belgaum, Haveri, Davanagere and Chitradurga.

Finally, how prepared are you for the state polls next year?

Constant organisational strengthening will be done as far as the party is concerned. For all infrastructure—from booth level to the top—the machinery is ready. The party is concentrating on areas where there were some gaps last time. BJP is unified and well prepared for the election.