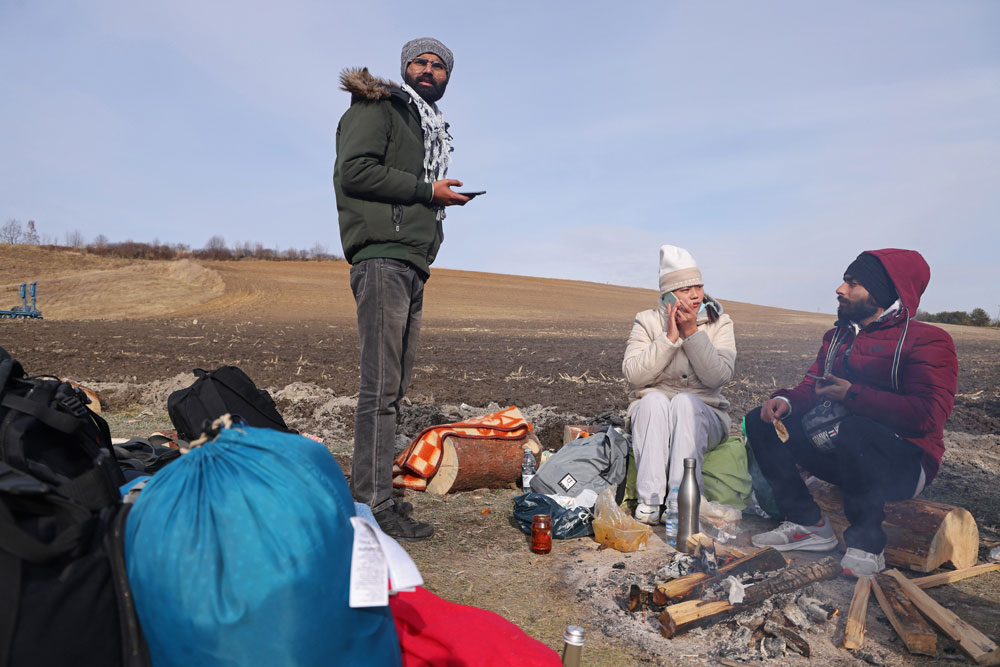 
When Kunwar Sharma, a student at Kharkiv National Medical University, returned to Kharkiv in September last year, he heaved a sigh of relief. While classes were being conducted online, he felt his education was being compromised by not being in a classroom. “And here I am, merely a few months later, desperate to leave.”

Kunwar’s first conversation with Open was on February 27. There had been air raids in the morning and he said he could see armed men and women walking on the street from his apartment building. He and his friends, a group of four, had been rationing their water and food since February 24 and were oscillating between hope and panic. “I am from Tapa Mandi in Barnala district of Punjab. The loudest noise I had heard until now was the backfiring of a car. Gunfire on the streets doesn’t sound like anything they show in movies. We are all so scared.” Over the course of the next two days, Kunwar and his friends managed to make the over 1,000 km long journey to Lviv across a war-torn Ukraine. He is now waiting to cross over to Poland and, hopefully, be on a flight back home.

Nearly 20,000 Indian students were in Ukraine when the country was attacked by Russia on February 24. Spread across the country, in different university towns, most students, quite like Kunwar, had made their way back to their colleges only a few months ago after spending the pandemic at home. The students stranded come from across the country, be it Punjab, Madhya Pradesh, Kerala, Karnataka, Uttar Pradesh and Kashmir. According to the latest reports, nearly 12,000 students have been evacuated. The remaining 8,000 are concentrated in cities close to Russia in the east. This has made it tough for them to travel, though in a briefing a few days ago the foreign secretary had said that efforts were on to evacuate these students from the Russian border. However, Anandu Krishnan, 24, was stranded in the city of Sumy till March 1. “Mines on roads, rail links destroyed. We don’t know how to leave,” he said in a text to Open. By this time, the Indian embassy had issued missives to its citizens to leave Kyiv.

The consensus is that the evacuation by the Indian government should have been done much earlier but the situation on the ground, especially when it comes to diplomacy, is always trickier. It was on February 15 that the first advisory was issued by the Indian embassy which said that Indian citizens and students who did not have essential work in the country should leave. “But the key here is the wording. Classes are essential, aren’t they? How could we just get up and leave? So, we did not,” says Krishnan. Even those who were keen to leave found themselves hampered by the exorbitant price of tickets—Rs 60,000 as opposed to Rs 30,000—back home. Over the course of the next few days, several advisories were issued, including removing the cap on passengers who could fly under the air bubble established with Ukraine, arranging for special flights for students to return and, most importantly, asking students to leave. In contrast to this was the advisory issued by the embassy in Yemen in 2015 which unequivocally asked Indians living there to leave.

Indian missions located in conflict-ridden countries have a standard policy on how evacuations are to be conducted in case of escalation of conflict, with the first step being advisories. Advising people to leave if their work is non-essential is standard wording if the inputs suggest the situation is under control. “These are also worded keeping in mind that they should not cause any panic. However, the fact is that there is no tailor-made response in situations which are inherently wait and watch. You monitor everything, rely on inputs, and take decisions accordingly,” says a former Ministry of External Affairs (MEA) official with stints in Afghanistan and the Middle East.


Over the years, particularly since the first Gulf War, India has built a reputation for not leaving its citizens behind—never mind Akshay Kumar’s attempts to tell you otherwise. With several operations ranging from Kuwait to Libya and Yemen under its belt, the country has learnt several lessons, and now even has a division that looks specifically at this, according to former Indian ambassador Anil Wadhwa. “This has 3-4 people at any point of time and more effort and personnel are added as a situation develops. This is how a control room comes up.” And while there is a standard operating protocol (SOP) in place, it is always difficult to anticipate when you need to start evacuating. There are delicate backroom negotiations required as well as emergency talks at the ground level, all of which comes under the purview of the ministry. “In the case of Operation Rahat, we had to request the Saudis to hold firepower. In the window given, we had to chart out the designated routes as well as how many sorties were possible. In Ukraine, students must travel across the country to get to the border points from where evacuation is being conducted. If we have the means, we organise buses to transport them; it all depends on what the situation on the ground is.”

Over the past few days, a narrative has developed about why students go abroad to study, but it is mostly armchair posturing, completely uninformed of ground realities. It also carries more than a whiff of judgement in it, based entirely on a denial of aspirations. Chelsi Rathore of Indore was on the first evacuation flight back to India. A student at the Bukovinian State Medical University in Chernivtsi, which border the Romanian border, Rathore is happy to be home but is also worried about the other students who are stranded there. “Evacuation is happening in lots, and I was lucky to be on the first list. I have so many friends who are still there, so it’s not easy for me even now.” Added to that is the uncertainty of what the future holds. “What is this narrative about why do we go outside to study? Why shouldn’t we? Are we expected to give up on our aspirations because someone, somewhere will take offence to them? And for the record, the Ukrainian education system is not a breeze.” Rathore researched both Germany and Ukraine extensively before settling on the latter.

The situation on the ground is only getting worse with the plight of more and more students being shared by family members taking to social media. Stories about being stranded on stations or not being allowed to board trains are becoming common even as students like Krishnan remain stuck in Sumy, their text exchanges becoming increasingly monosyllabic.

“As a country, we have a responsibility to our citizens which we will discharge. Flights are landing in Hungary, Poland, roads are excellent, border points have been informed but evacuating 20,000 people [from Ukraine] is no easy task,” says Hardeep Puri, former Indian ambassador to Nepal. The biggest issue is the people stuck on the eastern side of the country. Students like Kunwar managed to get on a train headed out of Kharkiv, a city that the Indian embassy in Poland has now said should be evacuated immediately.  The advisory asks people to reach neighbouring cities under any circumstance possible.

According to a 2016 paper by Carnegie India, the average rate of growth of India’s diaspora between 2000 and 2015 was 4.5 per cent. “The Indian government has more incentives to track and protect its citizens overseas. Achieving this goal will require increasing its capacity to document, standardize, coordinate and improve on its current civil and military operations.” The paper goes on to point out that the diaspora is larger, more diverse, and more politically influential. The contingent of ministers dispatched to oversee the evacuation flights and the frequent references to Ukraine in the election campaign speeches are an indication of that.

But a few thousand students are still stranded in Ukraine. The death of a Karnataka student has been the worst nightmare of every family with a child in Ukraine. The MEA has confirmed that their urgent Kharkiv evacuation message is on the basis of information from Russia even as criticism from both families and students stuck in Ukraine continues to rage. “There was a delay in advising evacuation. We can say that universities were conducting classes or that we did not anticipate an attack, but hindsight is always 50-50,” says a former ambassador. This will go down as yet another lesson in the ever-evolving evacuation manual of India, but that is small consolation for the students stuck there and their families.