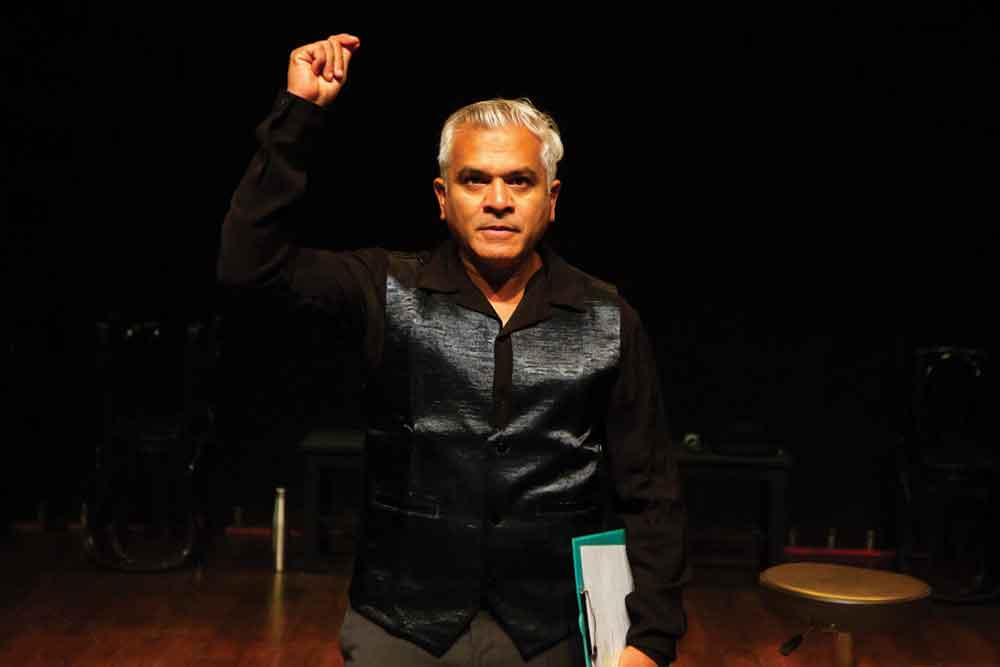 
EARLIER THIS year, I attended a performance of The Company Theatre’s (TCT) Piya Behrupiya at Mumbai’s Prithvi Theatre. It wasn’t my first time. Now I was there as much to watch the audience sing along, as for the perform­ers themselves. Songs and laughter were shared through masks, and a resound­ing applause marked the end. Many in the audience, I realised, were there just like me, for a repeat viewing of the spec­tacle that is Piya Behrupiya— in the tenth year of its existence, no mean feat for a contemporary theatre production.

Geetanjali Kulkarni, popular actor and Piya Behrupiya’s endearing Viola, calls the director of Piya Behrupiya, Atul Kumar, “the last of the showmen of his generation.” “Theatre is turning into a museum piece and productions close after 10-15 shows. He still believes in shows and the performative nature of the craft,” she says. Kulkarni is right, as this April marked the 10th anniversary of Piya Behrupiya, which premiered at Mumbai’s Prithvi Theatre. The play is a musical adaptation of William Shakespeare’s Twelfth Night and uses elements of nautanki to tell the story.

Over the last decade, I’ve watched every one of Kumar’s plays in packed theatres. Kumar’s plays—whether it was Hamlet the Clown Prince (where he was an actor) at Sir Mutha Venkatasubba Rao Hall, Chennai, or Piya Behrupiya in Bengaluru, Amitesh Grover’s The Last Poet (he also acted in this) or more recently Aaeen (directed by Kumar) at Prithvi Theatre—tickets always seemed to run out.

Kumar has seen a kind of commer­cial success that is rare for a theatre director in India. Speaking about the play’s success, at a café in Mumbai’s Versova, he says, “Piya Behrupiya has made us a lot of money. The actors have made more money with Piya Behrupiya than they would with another play or a film for that matter. It has made TCT so much money that we have been able to construct the living spaces at our Kamshet residency, and three studios. All our other theatre projects have been cross funded by Piya Behrupiya. We’ve supported other theatre companies in Delhi, Mumbai, and Bangalore. We’ve also supported theatre organisations.”

He adds, “The fans say the lines before the actors. It’s become one of those things.”

Piya Behrupiya came about quite by chance. In 2012, Kumar was one of two Indian theatre makers to be invited to direct for the prestigious Globe to Globe Festival in London. The other was Sunil Shanbag with a Gujarati adaptation of All’s Well That Ends Well. “I took it up because I needed the money for my Kamshet residency. On my own I would have never picked up the Twelfth Night, it would have been King Lear, Macbeth, or Romeo and Juliet, or Hamlet, or Richard III,” he says. It was a huge experiment and he says, “I grew up looking at the NSD [National School of Drama, Delhi] repertory plays with song and dance, and harmoniums and disliking it. Here I was doing the same thing. I thought I would not let anyone see it in India.”

Piya Behrupiya has been performed over 250 times and has travelled from South Korea to France, and catapulted many of its cast members to stardom. Amitosh Nagpal, actor and writer on Piya Behrupiya, recalls “When I joined the play as an actor, the script was not in its final shape. I took a crack at writing the fifth act and everyone liked it. Atul was keen on me adapting it but our performance in London was close. I wrote the rest of the script in four days.” Nagpal who was a lyricist, went on to write for big budget films like Hindi Medium. He credits Piya Behrupiya in part for launching his writing journey.

In the production, Nagpal plays a memorable Sebastian who incessantly criticises the director for leaving him with no significant part in the play, and all of four lines. “I would keep rebuking Kumar for making me write the play and leaving me with very little acting to do. At one point, perhaps out of sheer irritation, he asked me to go crib on stage if I wanted to. It eventually became a piece,” he says.


ATUL KUMAR, NOW 53, spent his early years in New Delhi where he was introduced to theatre for the first time, in school. He comes from a busi­ness family, which has little involve­ment with the arts.

He was lauded for his first appear­ance on stage and decided to stick with it in college. “It wasn’t as much theatre as finding my own identity away from my family’s,” he admits. He joined a theatre group, Chingari, and directed his first play Eugene Ionesco’s absurd­ist drama The Chairs, in 1989. It was his first tryst with the experimental. Chin­gari was also where Kumar met friend and collaborator Rajat Kapoor.

It is here Kumar first tasted what one would call commercial success. “The Chairs was performed in the basement at Shri Ram Centre for Performing Arts in New Delhi. The tickets were priced at ₹ 5, and the production budget was ₹ 5,000. And we made more than that over a few days,” he recalls.

Shortly after, Kumar moved to Mumbai to spend time with his then wife Sheeba Chaddha. He directed two short plays there and before he knew it, they had completed 50-60 shows. “I was never going back to Delhi,” he says.

He forged a friendship with Sanjna Kapoor who had recently taken over as the artistic director of Prithvi Theatre. Founded in 1993, Kumar’s TCT hosted Prithvi Theatre’s festival in Delhi. A year short of its 30th anniversary, Kumar is still the only permanent member of the company and has no repertory. Its official headquarters came years later, in 2014 in the form of a residency in Kamshet, two hours from Mumbai. Kamshet has studios, living spaces and a farm. Indian and international theatre groups use the space to develop new work and rehearse, nurturing Kumar’s dream of collective living.

Kumar himself shuttles between Mumbai and Kamshet.

Kumar received no formal theatre training though he admits he consid­ered applying to NSD, a few times. His early years were steeped in sporadic training with masters like playwright and director Habib Tanvir, Malayalam dramatist Kavalam Narayana Panicker and French puppeteer and theatre artist Philippe Genty. He also trained in the forms of Kalarippayattu and Kathakali, an influence that is visible in his devised work to this day.

“From my love for clowning to absurdist theatre, comedy, literature and all the way to Kathakali, farce is the only label I can’t run away from. I would love to break this mould too, but I think it has become my very grain” Atul Kumar, director

INSPIRED BY GENTY’S work, Kumar wanted to get into devised per­formance. He had no interest in realism. It was the absurdist that attracted him. This coupled with his and Kapoor’s love for clowning led to a series of successful plays, such as C for Clown, Hamlet the Clown Prince and Nothing Like Lear. The cast featured actors like Vinay Pathak, Ranvir Shorey, Kalki Koechlin, etc.

“Before we knew it, we had done 150 shows of C for Clown. It tasted like commercial success and felt somewhat like retribution for the times when our experimental work had three members in the audience,” Kumar says.

The subsequent plays ran to full houses too. Around this time, the mem­bers of the cast were also on the cusp of their cinematic breakouts, and it fed into the popularity of these plays. Kumar left after three productions for fear of being slotted, and afraid of turning complacent. “I knew I had to explore new forms constantly,” he says.

In 2010, he directed The Blue Mug, an intensely personal play on memory and memory loss based on Oliver Sacks’ book The Man Who Mistook His Wife for a Hat. It did over 100 shows including a US tour. But, at the peak of its success, Kumar shut it down.

DURING THE PANDEMIC too, Kumar kept producing work. There was Where Did All This Wood Come From?, an immersive piece where one actor performs for a single audience member. It was a silent play with no music, no dance, and no dialogue, and had 11 shows.

Towards the end of the pandemic, Kumar took a new route and tried his hand at realism through Taking Sides, the 1995 play by Ronald Harwood on a dena­zification investigation. He claims to have enjoyed it more than he imagined.

Then, in April this year, came Aaeen, a unique take on our Constitution, commissioned by the Centre for Law and Policy Research (CLPR). It had five stories by five different writers com­ing together through a devised, often tongue-in-cheek, musical.

I struggle to fit all his work under a sin­gle umbrella. He clearly has a penchant for the experimental and a deep desire to challenge his own craft. Almost sheep­ishly, he nudges me with the word, ‘farce’.

“I’ve been invited by NSD a few times to come teach ‘farce’. It’s when they told me, that I realised that it is what I do. From my love for clowning, to absurdist theatre, comedy, literature, and all the way to Kathakali, it’s the only label I can’t run away from,” he says, quickly adding, “I would love to break this mould too, but I think it has become my very grain”.

WHILE KUMAR MAY have identified a formula for success with a play like Piya Behrupiya, he wants to distance himself from the production. “It keeps the cash registers flowing,” he says dismissively. It is the sense of uncer­tainty and a lack of confidence in having captured the pulse of the audience that keeps him going.

It’s perhaps why his friends and col­laborators are generous with their criti­cism too. Rajat Kapoor says, “As an artist you are allowed to fail, and you should take that risk. But to me it seems like he is in a hurry for something,” he says.

In the future, Kumar wants to act more, he enjoys it more than directing and producing plays. He also feels the pressure to turn director in the film space, a temptation he has been trying to resist. Kumar has a whole other career in cinema and has been seen recently in OTT shows like Decoupled, Guilty Minds and Human.

He isn’t too eager to talk about it though and claims it only pays the bills. “But following the pandemic, I’ve started enjoying the work much more than be­fore. My tolerance for people has gone up and a lot of young people have entered the industry. It’s now a more respectful and safer place. Suddenly, I see myself saying yes more often than no,” he says.