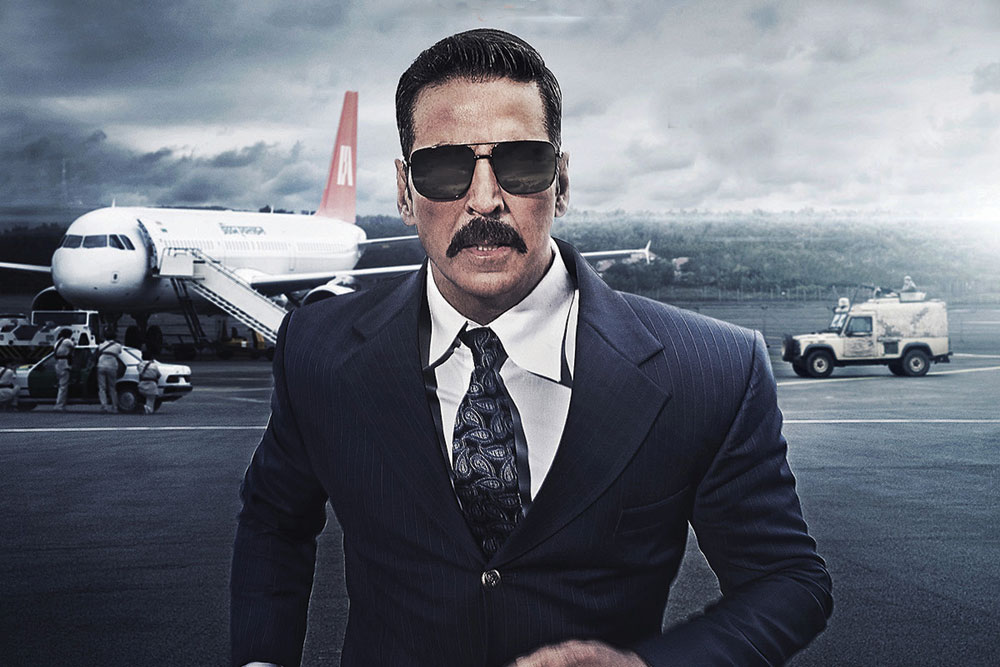 HOW MANY FILM stars can utter these lines and not make them sound cheesy: “Hindustan nahin jhukega. Is baar unki haar” (India will not bend. This time, they will lose)? Or when the supposed defence minister of the UAE is telling him that India is the land of Mahatma Gandhi and therefore should not use force, how many can say: “India is also the land of Bose, and we needed to do this to look the Indian National Army in the eye”?

In his latest blockbuster, Bell Bottom, Akshay Kumar traverses familiar ground. He plays a Research & Analysis Wing (RAW) agent who has personal angst against Pakistan and uses his brain and brawn to foil their hijacking of an Indian Airlines plane during 1984. Several world leaders make a guest appearance, from Indira Gandhi to Margaret Thatcher to Muhammad Zia-ul-Haq, but it is Akshay who is the star.

And not just in the movie, which ends with him moist-eyed as he looks at the Indian flag. That’s not the only time he does that—in the first big release in theatres since the second lockdown, his advertisements echo the same nationalism. In an ad, he speaks of tiles made with desh ki mitti (the soil of this land) and in a public service message, he advises a man to spend less on cigarettes and more on buying sanitary pads for his wife.

Beginning his career as a leading man in 1991, Akshay has been a work in progress. Once dismissed as Mr Muscles with a Mickey Mouse voice, he has worked with a coach on his voice, chosen scripts which reflect the zeitgeist and morphed from the ’90s action hero to the comic actor of the noughties, and increasingly now to a dramatic actor, albeit with occasional lapses in judgement which result in movies such as the Housefull franchise.

With a work ethic that sees him rising at 5 AM to exercise every day and sleeping at 10.30 PM most days, Akshay has created a mini-film industry around him, acting in at least four films a year, giving his fans variety and depth. With Bell Bottom, too, he became the first actor to lead a film crew to a shoot after the first lockdown. And there’s more coming up: Sooryavanshi, part of the police officers’ franchise directed by Rohit Shetty; Prithviraj Chauhan, helmed by Chandraprakash Dwivedi; Aanand L Rai’s Atrangi Re and Raksha Bandhan; Abhishek Sharma’s Ram Setu; and Farhad Samji’s Bachchan Pandey.

At a time when the three Khans—Shah Rukh, Aamir and Salman—are struggling to complete their projects, Akshay’s smooth turnaround keeps the industry moving, with enough releases lined up as and when theatres finally open. Consistency is an underrated virtue but an important one at a time when so much is unknown. The actor has also managed to steer clear of controversies, despite not holding an Indian passport while claiming to love his nation. He has done so quite smartly by aligning himself with Prime Minister Narendra Modi’s programmes, whether it is Atmanirbhar Bharat (he is the brand ambassador of the game FAU-G) or the PM CARES Fund to which he donated Rs 25 crore.

Akshay’s career is marked by many reinventions, but 1999, the year he did Sangharsh with Tanuja Chandra and Jaanwar with Suneel Darshan, stands out. A stint with Priyadarshan, beginning with Hera Pheri in 2000 honed his comic timing, and by the time he won a National Award for Rustom (2016), where he played a version of Wing Commander Nanavati who was betrayed by his wife and shot her lover, and Airlift (2016), where he plays a businessman who ensures the evacuation of Indians from war-torn Kuwait, he was established as an actor.

So when he utters lines such as “RAW, naam to suna hoga” or “It isn’t over till it’s over”, there are no sniggers from the audience. The man once dubbed Khiladi Kumar because of his dalliances with his leading ladies is now a real team player. The martial arts instructor who sustained himself by cooking at his uncle’s restaurant in Bangkok is now an actor who sustains a substantial part of the film industry—and has been doing so for three decades now.