The Restoration of Bose

Bose was a patriot of the highest order but what does he mean to Bengal? 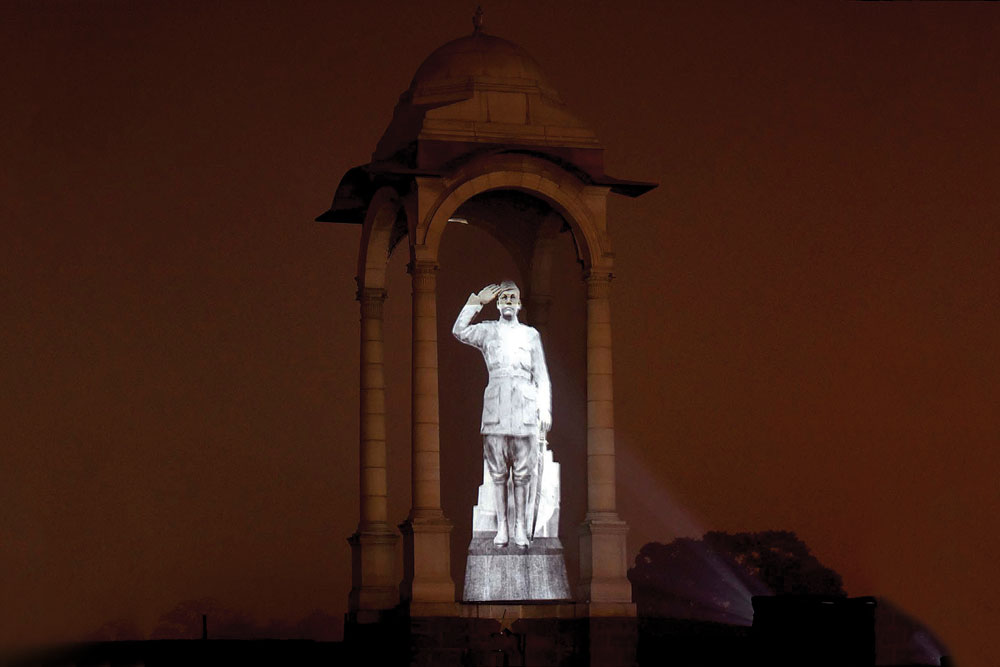 
ON OR ABOUT January 23rd, things tend to get a little dramatic. On or about January 23rd this year, Subhas Chandra Bose’s 125th birth anniversary, newly christened ‘Parakram Diwas’, and in the middle of a political tussle over rights of honouring and appropriation, a Bangla WhatsApp message (a jpeg image) began to circulate, juxtaposing Syama Prasad Mookerjee and Netaji Subhas Bose. The leader of the Hindu Mahasabha, attributed to something (Jukta Banglar Smriti, or Memories of Undivided Bengal) written by the poet Annada Shankar Ray (1904-2002), ‘says’ he couldn’t go to jail and that if he joined Congress, he wouldn’t be a front-rank leader unlike in the Mahasabha where he was the “only” leader. The text below Bose’s image quotes him from a speech delivered on May 12th, 1940, published a couple of days later in Anandabazar Patrika, whereby Bose exhorted the electorate to “remove” the “traitors” from national life—the traitors being the Hindu Mahasabha that had sent out trishul/ trident-wielding sanyasis and sanyasinis to seek votes but had betrayed the Hindu dharma by taking advantage of it. In Bose’s words, it was the “duty of every Hindu” to denounce the Hindu Mahasabha’s modus operandi. It’s only when one looks closely that the communist hammer and sickle resting between Bose and Mookerjee becomes visible, the handle of the hammer turned into a long tail of the ‘a’ of @, the ‘a’ itself being the sickle.

The fact that the Mookerjee quote, unlike Bose’s, was secondhand was pointed out and its veracity disputed soon after. But notwithstanding the 10-controversies-a-day trajectory of the Netaji saga post-2014, Bengalis have been schizophrenic about Bose ever since he disappeared in August 1945. Those to whom Bose did not, and does not, matter one way or the other would be a small minority in West Bengal. While Bose is the memory of an idea, or the idea of a memory, the approaches to dealing with the mystery of his fate and with his place in the pantheon of India’s freedom heroes originate at points that couldn’t be more distant from one another. Where they converge is the centrality of Bose to post-Independence Bengal’s idea of itself.

That significance stems from a number of factors, two of those more pertinent than the rest when it comes to the equation of an individual with a rump province left by Partition. Till the end of the 1980s, and even afterwards, one could rarely come across a grocer’s or a stationer’s or even a bookseller’s in most of urban and suburban Bengal where a portrait of Netaji in his INA uniform was not up on the wall. On January 23rd, one could not alight at a train station without volunteers (not always of the Forward Bloc) attempting to fix a Netaji lapel pin somewhere between the breast pocket and the collar. The one constant: Netaji was always in his military attire.


In Bose’s spat with Gandhi, and by extension with Jawaharlal Nehru, et al, Bengalis—believing in their self-image of being instinctively at odds with every kind of authority—saw their ever-irreverent soul bared. The emotional investment in Netaji’s fate is tied up with this blending of his honour with Bengali victimhood

The fact that he donned a uniform, raised an army and went to war busted the myth of the distinction between martial and non-martial races made by the British after 1857, a spurious categorisation that did not paint, in their own eyes, Bengalis in glory. Never mind Jayanto Nath Chaudhuri and other Bengalis who subsequently made “good generals” (or the fact that there’s another Bengal where the military brass and the rank and file are almost wholly Bengali, albeit untested by major territorial war). Subhas Bose was, from this perspective, a soldier, above all, and a commander of soldiers. Bose in uniform, leading the INA, was not the scattered and often misremembered heroism of Bengal’s “revolutionary terrorists” of the early 20th century. The slogans he raised, and others attributed to him, have lived on and are still aired every year on or about January 23rd.

A second explanation of Bose’s place in the Bengali psyche is more self-reflexively socio-psychological. The sad-looking, emaciated middle-aged men who wore their lapel pins, carried placards and undertook their annual January 23rd marches invoking “Netaji phire esho/Come back, Netaji”, would never have considered themselves martial and Bose was for them the muscular hero they knew they couldn’t be. But in Bose’s spat with Gandhi, and by extension with Jawaharlal Nehru, et al, Bengalis—believing in their self-image of being instinctively at odds with every kind of authority—saw their ever-irreverent soul bared. The emotional investment in Netaji’s fate, and his place in history, is tied up with this reductive blending of his honour with Bengali victimhood—he didn’t get his due and that was because there were interested parties who made sure that he didn’t. The casus belli was his restoration.

But the restoration of Bose wasn’t really a project. And it ran into Bengali schizophrenia right at the start (Bengali victimhood being the obverse of Bengali exceptionalism). Part of the reason was the ambivalence of both the Bengal Congress and the communists towards Bose (barring the exaltation of a rather monochromatic Bose by his Forward Bloc, a very junior constituent of the Left Front). Twenty-odd years ago, on the occasion of Bose’s 105th birth anniversary, then Chief Minister Buddhadeb Bhattacharjee had admitted that Indian Marxists had made “a great mistake” in wrongly evaluating Netaji, implying that the CPM’s decades-old vilification of Bose was an error. At the same time, Bhattacharjee had blamed Congress for ignoring Bose and accused BJP and the Sangh Parivar of attempting to appropriate his legacy.

However, it was only with the Narendra Modi Government’s undertaking of the restoration of Bose that the debate on ‘Whose Netaji?’ would assume a new dimension. It’s interesting to note that as long as the issue was one of “finding out the truth” about what happened to Bose, there were merely dismissive grunts from those less enamoured of Modi than they were of Bose and a bit of anger from latter-day Nehruvians who couldn’t wait to find out if such ‘truth’ would actually do Nehru’s legacy any harm. We have come a long way from that beginning to the hologram statue at India Gate.

At the heart of the Bengali schizophrenia vis-à-vis Bose is a conflict between wanting to see Bose restored and an unwillingness to let someone who’s not of Bengal perform the act of restoration—and also get the credit for it. (There was actually a lot of enthusiasm in Bengal in the early days of the Modi Government’s Netaji project, which perhaps indicates that the noises today are politically coloured and may not reflect all shades of opinion on the Bengal street.) The fact that they have now been given a fait accompli not of their doing adds fuel to the flame. For, no matter where one stands on the Mukherjee Commission’s report or on Netaji’s chosen path of action, or even his legacy as a whole, what can’t be disputed is that, hologram statue or not, Subhas Chandra Bose has been placed front and centre in the Indian national consciousness.

Bose was a patriot of the highest order whose sacrifice deserved all-round recognition. Perhaps he always got that but the news didn’t penetrate the armour of Bengali exceptionalism. Or, his admirers were always right about Bose being ignored. Bose was a unifying, genuinely secular leader for the men and women who followed him (Muslim officers of INA in India and Pakistan have repeatedly testified to that fact). Bose was a man of action who thought for himself. One day, when Indians are no longer fighting political battles over Bose, perhaps they would also peel their eyes to deal with the most problematic part of his legacy and the fact that great men and women can and do make mistakes— something that his one-time indirect mentor, Sri Aurobindo, and his predecessor as Congress president, Nehru, both understood a lot better than Bose himself.