Movies and online streaming shows are dipping into real life characters for drama, action and suspense 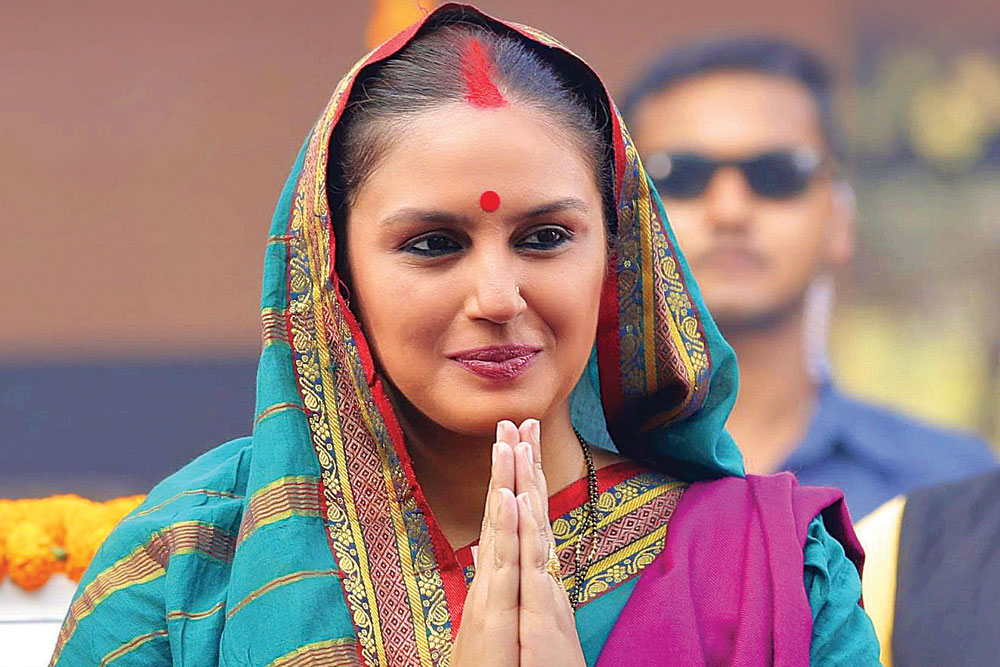 
WHEN WE LAST met Shakthi Seshadri (played by Ramya Krishnan) in Queen (2019- ) on MX Player, her political mentor and long-time co-star GM Ravichandran (Indrajith Sukumaran) had died. She was set to become chief minister of Tamil Nadu, ending her political apprenticeship and her film career. When Gautham Vasudev Menon starts shooting season two, we will see Shakthi’s life as Tamil Nadu Chief Minister and her growing stature on the national stage. Menon details the friendship between Shakthi, based on late Tamil Nadu Chief Minister J Jayalalithaa and a character loosely based on the late Prime Minister Rajiv Gandhi. Menon, whose go-to movie is the lush and brilliant Iruvar, Mani Ratnam’s 1997 biopic on MG Ramachandran and MK Karunanidhi, says he is fascinated by the Rajiv Gandhi era.

Despite living through a time when identities are so fragile that any attempt to write or depict them immediately causes offence, usually even without the movie or web series being released, we are definitely in the Age of the Biopic. SonyLIV has just released Maharani, a web series inspired by the events that led to Rabri Devi (played by Huma Qureshi) becoming chief minister of Bihar. It is made by Subhash Kapoor, the same director whose Madam Chief Minister ran into trouble earlier this year for having his lead heroine, loosely based on Mayawati, carrying a broom in the poster. Jayalalithaa herself is getting another biopic, this time a movie titled Thalaivi, from the pen of Vishnu Vardhan Induri, who created the Baahubali universe. The movie stars Kangana Ranaut.

And Vidya Balan hopes, one day, that her long-standing dream of making a biopic of Indira Gandhi will be fulfilled someday. “Inshallah, soon,” she says.

Such is the competition that the same topic is getting multiple treatments. Nikkhil Advani is deep in the midst of making Rocket Boys, a series on the three men responsible for India’s space programme; Homi Bhabha, Vikram Sarabhai and APJ Abdul Kalam. There is another Bhabha film in the works, but Advani is unperturbed: “I’m glad more people are telling these kinds of stories,” he says. “Our kids deserve to learn about heroes other than Shah Rukh Khan and Sachin Tendulkar.” A few scripts based on MG Ramachandran’s life are also in the works.

Others point out that biopics have been in vogue before. In the early noughties, as many as five biopics were made on Bhagat Singh, most notably The Legend of Bhagat Singh (2002), starring Ajay Devgn. The last to hit the screens, Rang De Basanti, did exceedingly well at the box office in 2006.

Bollywood doesn’t necessarily like too much reality but the biopic allows it to come as close as possible without ruining its cultural aesthetic—period films, after all, mean great costumes and lavish sets—as well as capturing the zeitgeist, where chest-thumping nationalism is the order of the day. Hence the biopic of 1971 war hero Field Marshal Sam Manekshaw, starring Vicky Kaushal. He is also to star as Ghadar Party revolutionary Udham Singh. Kaushal jumped into the country’s consciousness with his vigorous portrayal of a soldier in Uri: The Surgical Strike (2019).

The biopics on Mayawati and Rabri Devi have negotiated well the transformation of two ordinary women into ruthless politicians. In Madam Chief Minister, Tara Roopram (Richa Chadha), a protégé of Masterji (a Kanshi Ram-like figure, played by Saurabh Shukla), a local teacher, takes on the challenge of defeating the sitting chief minister of Uttar Pradesh from Gauriganj. Once she wins, she is chosen as chief minister over several veterans in a coalition government. Director Subhash Kapoor shows how a woman’s body is used for politics. “Main kuwari hoon, par tumhari hoon (I am unmarried but I belong to you),” says Chadha, playing a Mayawati-like figure with short hair and clad in a sari. In another scene, she wears heavy gold jewellery, and introduces her husband on stage, pulling up his veil of flowers, like a man would for a bride, asking the crowds to embrace her choice. They roar back, knowing that one of their own has breached and indeed reversed upper-caste privilege.


In Maharani, which released last week on SonyLIV, the backward caste chief minister’s homely wife Rani Bharti is initially uncertain about power as she is “ashikshit, ayogya, anubhavheen, aur anpadh (illiterate, incapable, inexperienced and unlettered).” But she is shown to slowly become aware of power’s potential to change realties—pay salaries, bring justice to victims, and cut enemies to size. She, about whom it was once said that she had been picked from the jungle, becomes so adept at wielding power that her husband, who chose her because she could be a rubber stamp, feels threatened, especially as she refuses to reverse some decisions. Huma Qureshi plays her with the right mix of ignorance and natural intelligence, initial recalcitrance, and hard-won confidence, showing a woman who eventually astounds her critics with her independent decisions.

While Maharani by and large clings to the idea that men and women behave differently when in power, Madam Chief Minister makes no such distinction. As someone says early on in the movie: “The one who builds a metro loses elections, the one who builds temples, wins.” Largely ignoring the advice Masterji gives her about not being influenced in politics by the personal, she repeatedly takes decisions motivated by private hurt, anger, or jealousy. The idea, currently in vogue, that women make touchy, feely leaders who work with their hearts rather than egos, is not something that Subhash Kapoor believes in. Most of what Rani Bharti does too is propelled by self-interest, in this case, her husband’s survival—as his Officer on Special Duty says to her, “Satta aur suhaag dono aapke haath main hain (Your husband and his position are now in your hands).”

Biopics, while seemingly about reality, are actually a great escape from it. They create a myth of nationhood, allowing history to be revised and reinterpreted

Actor Sohum Shah who plays Maharani’s husband Bheema Bharti chose to not caricature Lalu Prasad Yadav in the role. He plays Bheema Bharti with a swagger and brio. His idea about his politics was simple: “Swarg na de paye to kya hua, swar to diya (So what if we couldn’t give you heaven, at least we gave you a voice).”

Biopics, while seemingly about reality, are actually a great escape from it. They create a myth of nationhood, allowing history to be revised and reinterpreted. As Preeti Kumar writes in Reconfiguring India: Narrating the Nation through Great Men Biopics (2014), in presenting a quasi-realistic portrayal of the lives of the protagonists, the Indian biopic constructs and mediates a specific and predominantly masculine image of the nation to the audience. “Nation-building as a thematic concern is predicated by foregrounding the contrast between a rich past and an inferior present. In a country that is riven by fissiparous tendencies and sub-nationalities, biopics link past lives to present concerns to emphasise unity and sovereignty. A nation that has been perceived as ‘soft,’ ‘non-violent’ is re-presented as ‘manly’ and assertive. The biopic foregrounds the hero but celebrates and consecrates the nation,” she writes.

Indeed, movies based on real events do the same. Abhishek Sharma who directed Pokhran (2018) was struck by the idea of Indian intelligence fooling the CIA during the 1998 nuclear blasts. “That was my starting point,” he says. It is the idea of the emerging global superpower taking on the established superpower with indigenous technology and smarts. As Saurabh Shukla says, why does anyone want to write or create a piece of art? It is but to document the times we are living in. After all, politics is in everything, even the potato you eat, he says.

And sometimes it’s an onion, whose layers have to be peeled. Raj Kumar Gupta directed Raid (2018), based on a real-life Income-Tax raid on a powerful Lucknow politician, played by Shukla. What’s explored here is the politics of the family and political hierarchy. When the local politician reaches the Centre, asking the prime minister for help, he doesn’t even get the time of day from her. At the same time, he is unaware of the extent to which his family has benefited from his power.

Shah believes that a generation in small towns, which had fallen out of the habit of watching movies because of the closure of single-screen theatres (which were to be replaced by multiplexes) has come back to streaming services. “Take my own hometown of Sri Ganganagar in Rajasthan,” says Shah. “We had six single-screen theatres. All shut down and were not replaced by multiplexes. Now the generation in their 40s and 50s are returning to streaming. They can watch it on their phones anytime, anywhere.” He believes they are also no longer interested in romances set in foreign locales, which were aspirational in the 1990s. “Politics is something that captivates them and almost everyone has a personal relationship with the MLA,” he notes.

That has a flipside. Almost everyone believes he or she has the right to contest the portrayal of their heroes. It could be 2018 Padmaavat rabble rousers Karni Sena now protesting against the dropping of ‘Chauhan’ from the forthcoming film Prithviraj, being shot by Yash Raj Films starring Akshay Kumar. Or it could be the outrage in the political establishment in Tamil Nadu over the depiction of an LTTE militant played by Samantha Akkineni in season two of The Family Man. Or indeed it was the anger felt in some quarters over the portrayal of Shiva by Mohammad Zeeshan Ayyub that led to the recent web series Tandav being edited in parts.

It all comes down to authenticity. Qureshi, who plays Rani’s character, saw her as being rooted to the realities of the country. “Subhash [Kapoor] has been a journalist and understands politics very well. He gave me a fleshed out character with nuance. I had a diction coach and as for the rest, I had, after all, been in Gangs of Wasseypur.”

That feeling of belonging is eventually what makes some biopics stand out from others.