In one of their enduring obsessions, Hindi shows and films either exoticise or vilify Muslim rulers 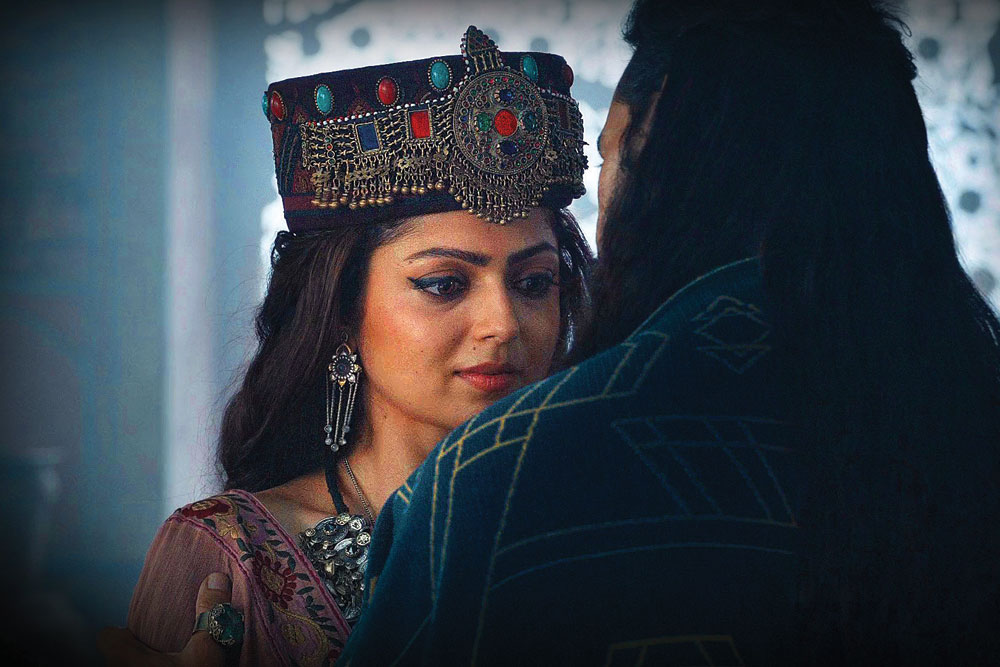 A scene from The Empire


WHEN THEY WERE mapping the four sets of The Empire, Disney+ Hotstar’s sweeping new show in Madh Island, Marol, Film City and Bhandup in Mumbai, the producers realised Babur hadn’t been given his own chambers. Showrunner Nikkhil Advani says, “His grandmother Ehsan Daulat had her own room, so did his sister Khan­zada. It underlined for us the idea of a king without a kingdom, as well as the importance of the women in his life.”

Looking at the Mughals through the women in their lives is a time-honoured Bollywood convention. From the 1960 classic Mughal-e-Azam, which transformed the fictional Anarkali into the object of Prince Salim’s fascination, to Jodhaa Akbar in 2008 where questions of Jodhabai’s existence were cast aside to portray the marriage as one of equals, Bollywood has been romancing the Mughal dynasty and other Muslim rulers.

Over the years, the romance has taken a darker undertone. In Padmaavat (2018), the Sanjay Leela Bhansali movie, Alauddin Khilji is a man of gargantuan appetite, whether it is for meat or for sex. He lusts after Padmavati, who would rather lead the palace women into a dramatic jauhar than allow herself to be a war trophy. Latter-day Hindu revivalists have seen in this signs of what they like to call ‘love jihad’, but alliances with Hindu kings were often part of war strategy. But this was less about religion and more about real estate. More than 200 years after Khilji, Babur is shown to face a similar quandary, forced into a marriage with the princess of Kabul for political reasons. The real love of his life is his general Baisanghar’s daugh­ter Maham, though his childhood friend Qasim offers stiff competition.

Bisexuality was not uncommon in that period or earlier. In the case of Khilji, his relationship with his general Malik Kafur is shown to be sexual, but only by suggestion, whether it is shar­ing a tub or being fed by the king. In Razia Sultan, Kamal Amrohi’s 1983 clas­sic that took eight years to complete, in the song ‘Khwab Bankar Koi Aayega’, Parveen Babi’s feather is doing to Hema Malini’s Razia what Dilip Kumar did to Madhubala in Mughal-e-Azam.

Author Madhulika Liddle says she cannot think of a single Muslim-centric Hindi historical film that didn’t have romance/love as the focus of it. What amazes her is that it’s obvious that a lot of historical research has actually been done, but the filmmakers still twist the plot around so that it ends up centred on a romance. The 1945 film Ek Din Ka Sultan is based on the episode of a bhishti (water supplier) who saves Humayun from drowning after a battle. In gratitude, Humayun grants him his wish to sit on the throne for a day. Whoever scripted the film had done enough research to know the bhishti’s name, as well as the relatively obscure fact that he issued leather coins during his one day as Sultan, but they still turned the film into a romance. The same goes for plenty of other films— Shama Parwana (1954), Taj Mahal (1963), Jahan Ara (1964), Noor Jehan (1967), Changez Khan (1957), Halaku (1956), beside Razia Sultan and Jodhaa Akbar. Though there are often fairly accurate historical backdrops in the form of events and personalities, a love story is made the focus.


ROMANCING THE MUGHALS is ingrained in Bollywood’s histo­ry. But Liddle believes it’s a ma­laise in Bollywood historicals irrespective of religion. Even non-Muslim historical films, Amrapali (1966), or the musicians/ poets actor Bharat Bhushan portrayed, have romances at their core. But the more forbidden the better. Whether it is Jamal ud-Din Yaqut, or Prince Salim and the court dancer Anarkali, what is taboo is seductive. There is also the phenomenon of seeing others through one’s perceived weakness. Muslims are always portrayed as wilder and stronger than Hindus. It is a different kind of masculinity, says cinema historian Kaushik Bhaumik. In Padmaavat, Khilji embodies this, as the camera pans his body, and as he makes a striking contrast, dressed in black, to the all-white, slim and wiry figure of Padma­vati’s husband, Maharawal Ratan Singh.

In The Empire, the relationship be­tween Shaibani Khan and Khanzada is fraught with this same tension, without the religious angle. Women were often the spoils of war, their sexual conquest mirroring the triumph over the land. Shaibani’s condition that Khanzada remain with him was one of the worst moral defeats of Babur’s life, and her return one of his greatest victories. But if Shaibani’s savagery and Khan­zada’s stubborn resistance have shades of Bhansali, much of the credit, or blame, goes to Mitakshara Kumar, graduate from Film and Television Institute of India and long-time associate of the Pad­maavat director. “We took some liberties with Rutherford’s [Empire of the Moghul by Alex Rutherford] book,” says Advani, for the story to come full circle, whether it was Ehsan Daulat choosing her kingdom over her husband or Khanzada altering Babur’s will.

There is an element of exotic otherness as well which explains the popularity of Muslim historicals since Pukar, Sohrab Modi’s 1939 film about Jehangir’s judicial quandary. Tansen (1943), Humayun (1943), Shahjehan (1946) and Baiju Bawra (1952), whose remake is in development, were either based on characters in the Mughal court or on the emperors themselves. Film scholars Kalyani Chadha and Anand P Kavoori make the point that even though these historicals promoted Hindu-Muslim unity, the use of complex Persianised Urdu dialogue and stylised mannerisms reflecting the etiquette of the Mughal court showed them as distinct from the mainstream.

Bollywood was kind to Mughal wom­en much before historians and popular writers excavated the histories of Noor Jahan and Jahanara to show they were more than cunning consorts and devoted daughters. In the 1964 movie, Mala Sinha plays Jahanara in a doomed romance with Mirza Yusuf Changezi, the always reliable Bharat Bhushan (whose acting arsenal includes Baiju Bawra and Mirza Ghalib). But Jahanara was more than that—she was independently wealthy, trained in Sufism and a well-regarded writer and supporter of publications. In Noor Jehan (1967), the future empress of India is shown as Meherunissa, the love of Prince Salim’s life. But she was much more than that, a co-sovereign who offered political advice, made laws, com­manded a battle across a roaring river and rescued a kidnapped emperor.

The biggest romance though has always been the one between the Mughals and Hindustan. In The Empire Umar Sheikh, Babur’s father, tells him of Hindustan, a land of poets and scholars: “It is a big nation. Full of people. Different people speaking different languages. Different but united.” In the last episode, as Babur and Khanzada stand by the side of the Yamuna listening to the song of a boatman, it is clear that Babur, for so long on the run from Kabul and Samarkand, has found a home.

Hindustan is the unseen lover in Mughal-e-Azam, the object of affection against which all others are measured. “Hamara Hindustan koi tumhara dil nahi hai, ki laundi jiski mallika bane [Our Hindu­stan is not your heart that you can make just about anyone its empress]”, says Ma­harani Jodha to Prince Salim. And Salim’s iconic reply? “Mera dil bhi koi Hindustan nahi jis par aap hukumat kare [My heart is not Hindustan that you can rule it].”

As the monologue at the beginning of Mughal-e-Azam says: “Main Hindustan hoon: Zaalimon ne mujhe loota, meherbanon ne mujhe sawara, naadanon ne mujhe zan­jeeren pehnayi aur mere chahnewalon ne unhe kaata [I am Hindustan: Barbarians plundered me, the benevolent remade me, the naive tried to jail me, and those who loved me set me free].” And prime among the ‘chahnewale’ Akbar contin­ues the monologue, he who always held Hindustan in a sweet embrace.

But this was a movie in which Jodha’s worship of Lord Krishna could go hand in hand with Akbar’s trek across the desert to a dargah to ask for a son. This kind of syncretism, so much a part of Mughal rule, was the leitmotif of Jodhaa Akbar as well, which begins much like Mughal-e-Azam with an ode to the love Mughals had for Hindustan. As Amitabh Bachchan’s monologue says; “Since 1011 AD, countless have ravaged and plundered this land. But then came the Mughals. They made it their home, gave it love and respect.” And none more so than Akbar, the first Mughal emperor to be born on Hindu­stan’s soil, and the first to realise con­quest by winning hearts was better than merely shedding blood. His cinematic version couldn’t be a greater tribute to religious syncretism: he allows Jodha to maintain her faith and worship her god in a temple within the Agra Fort, he considers Rajputs to be devotees of the sword and the bravest of brave.

Though these historical films promoted Hindu-Muslim unity, the use of Persianised Urdu dialogue and stylised mannerisms reflecting the etiquette of the Mughal court showed them as distinct from the mainstream

That was 2008. By 2020, much had changed in India, and Tanhaji: The Unsung Warrior reflected it, opening with a particularly brutal scene where Aurangzeb’s soldiers pillage a village. One of them says to a villager, just before beheading him: “If you don’t pay tax, give up your religion; if you don’t give up your religion, then sac­rifice your life.” The Mughal soldiers are repeatedly referred to as darinde (monsters) and the Marathas as brave soldiers of swaraj. Aurangzeb himself, displaying his knitting skills, is shown as somewhat effete, a contrast with the usual robust physicality bestowed upon the Mughals. Contrast this with Panipat, directed by Ashutosh Gowariker, made a year earlier. In this Ahmad Shah Abdali is shown winning the Panipat battle in 1761, defeating Sadashiv Rao Bhau, but never return­ing after witnessing the Maratha courage at such close quarters. Abdali, who founded the Durrani dynasty in Afghanistan, is not the kind of Muslim ruler new India wants to see—lethal but also compassionate. The movie was a commercial failure.

Clearly, there is little room for nu­ance in New India, even if Sadashiv got several opportunities to utter the chest-thumping dialogue: “Every single drop of blood is screaming Hindustan will never be yours.”