The Love and Times of Lalit Modi

At 58, Modi seems to have found love again with Sen, 46, who has been much less enthusiastic than him about their relationship 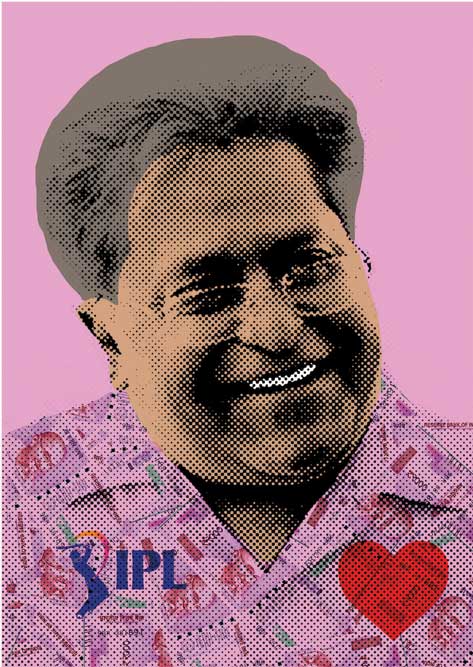 
FOR EVERY THREE urban legends about him, at least one is true. It could involve Lalit Modi throwing a tantrum outside the VIP gates of the Abu Dhabi stadium where India was about to play Pakistan in the 2005-06 face-off because he was not being allowed in, call­ing up then captain Rahul Dravid to cancel the match. It could involve him inviting a friend to his Sloane Square mansion in London to partake of his hospitality that extended beyond drinks and dinner. Or it could mean booking the entire floor of the five star hotels he would be staying in for privacy.

His public declaration of love for former Miss Universe Sushmita Sen on Twitter, for long his preferred mode of communicating with the world, has brought him back in the news. Every time his self-proclaimed baby, the Indian Premier League (IPL), made some headway, Modi would find a way to claim credit for it. Of his many business ventures, IPL, after all, was the only one that has been successful, although the jury is out on whether he can claim to be its sole creator and executor. In 2006, Nimbus presented a proposal to the Board of Control for Cricket in India (BCCI) board members in Lon­don, St James Hotel, that offered a plan for a T25 professional cricket league, and IMG, the sport manage­ment firm, was almost entirely responsible for the tournament’s on-ground execution.

But without Modi’s relentless networking with friends, perhaps IPL would not have taken off with such startling ease, surprising even his patrons at BCCI, among them IS Bindra, and Sharad Pawar, whom he helped in becoming president, thwarting Jagmohan Dalmiya. For the first three years, he ran the league like a despot of a minor nation with one sleepless assistant, Radhika Moolraj, commandeer­ing luxury cars for smaller town matches and helicopters to land in stadiums for glitzy finals. Since 2011, when he fled India and the subsequent eight charges of misconduct were levied against him by BCCI, he has lived an unapologetically posh lifestyle, especially since 2018, when his wife died after battling cancer. Most recently, he posted a series of photographs on Instagram of his daughter, designer Aliya Modi’s four-day Venice wed­ding with American Brett Carlson (where he couldn’t resist calling himself a showman). This was just before he posted a series of photographs with Sen with appropriately gushing text.

Modi loves attention. He feeds off it, craves it. In a hilarious episode with Indian-American comic Hasan Minhaj in 2019, he chose the word “controversial” to describe himself and happily agreed to his interviewer’s description of him as “PT Barnum meets Vince McMahon” with a bit of Billy McFarland from the Fyre Festival: shady, shady, shady. For perspective, Barnum founded the Barnum and Bailey circus in the late 19th century, McMahon began the World Wrestling Enter­tainment, which some would argue is a circus for wrestlers, and McFarland is a convicted felon who defrauded investors by selling tickets to a festival that was a disaster. Modi loved the description and thanked Minhaj for the compliment.


Sen has been quite public about her love life, unlike heroines who follow the coy code. By tweeting about it, he has hit the headlines again, his favourite spot on earth

Modi’s swagger, it could be argued, is the result of his silver spoon. Born to the late KK Modi who ran several businesses as president of Modi Enterprises and was among the top 100 richest businessmen, according to Forbes in 2012, Lalit Modi is executive director of the group—like his sib­lings Charu, who runs educational institutions, and Samir, who runs a cosmetics company and a chain of 24×7 stores, among other things. Their mother, the elegant Bina Modi, is chairperson. One of the many scandals discussed endlessly in the rarefied environs of Lutyens’ Delhi and SoBo was Lalit Modi’s relationship with one of Bina’s friends, Minal Sagrani, whom he married in 1991 despite parental opposition. He is currently engaged in a property dispute with his mother and siblings, which the Supreme Court has asked them to settle through mediation.

Before he claimed complete credit for IPL, Modi had a string of failed businesses which have almost always ended in dispute. From the beginning of cable television in India in 1994, when he became the India distributor of the sport broad­caster ESPN on a five-year contract to the creation of Modi En­tertainment Network (MEN), his joint venture (JV) with the Walt Disney Company failed, all his business relationships fell flat, with the exception of MEN, that too, after a year’s legal battle. Modi has also dabbled in the online gaming and lottery industry in India.

IPL was perhaps the only business where he created genuine value but it also had a particular streak of cronyism. Rajasthan Royals, owned by the UK-based Emerging Media, had a dominant 44.1 per cent shareholding by Suresh Chellaram, Lalit Modi’s brother- in-law. Kings XI Pun­jab is co-owned by Mohit Burman, brother of Dabur scion Gaurav Burman, who is married to Modi’s step-daughter, Karima.

Cricket analyst Ayaz Memon says there are two versions to every story. “Yes, he was haughty and pompous but he was also a go-getter. When Subhash Chandra’s Indian Cricket League was launched, there was no one in BCCI who had the energy or imagi­nation to run a counter to it. They needed Modi to launch a TV-friendly blockbuster,” he says. He was a virtual peacock in a crowd of dinosaurs. And he had the backing of BCCI to prevent Indian cricketers from playing in other leagues and getting big-ticket players from abroad. But eventually, he apparently became too big for BCCI and was cut down to size.

At 58, Modi seems to have found love again with Sen, 46, who has been much less enthusiastic than him about their relationship and their “whirling” global tour (we presume he means whirlwind). Sen has been quite public about her love life, unlike heroines who follow the coy code. By tweeting about it, he has hit the headlines again, his favourite spot on Earth. Sen has been less than chuffed about being called a gold-digger on social media given that she is a ‘self-made’ woman. Indeed, her career has seen a resurgence after she was cast as the lead character in the Disney+Hotstar series, Aarya, even as she has been battling the return of a varia­tion of Addison’s disease, also called adrenal insufficiency, that struck her between 2014 and 2018.

His social media feed is like a peek into the lifestyles of the rich and famous, from a seven-day detox stay at the swish Swiss Chenot Palace Weggis to his birthday gift to his son, Ruchir (no less than a Ferrari 812GTS). It also has moments of candidness—one recent post from Hotel Madrid said: “We’re all f-cked up. Some of us…just don’t lie about it”; lots of self-promotion, especially of interviews, where he expounds on IPL and takes credit for the media rights having ballooned to ₹ 48,390 crore; some throwbacks—usually of past magazine covers and hoardings; and some announcements, including that of a biopic he will make on himself. That would be the ultimate act of self-glorification in a life full of it.