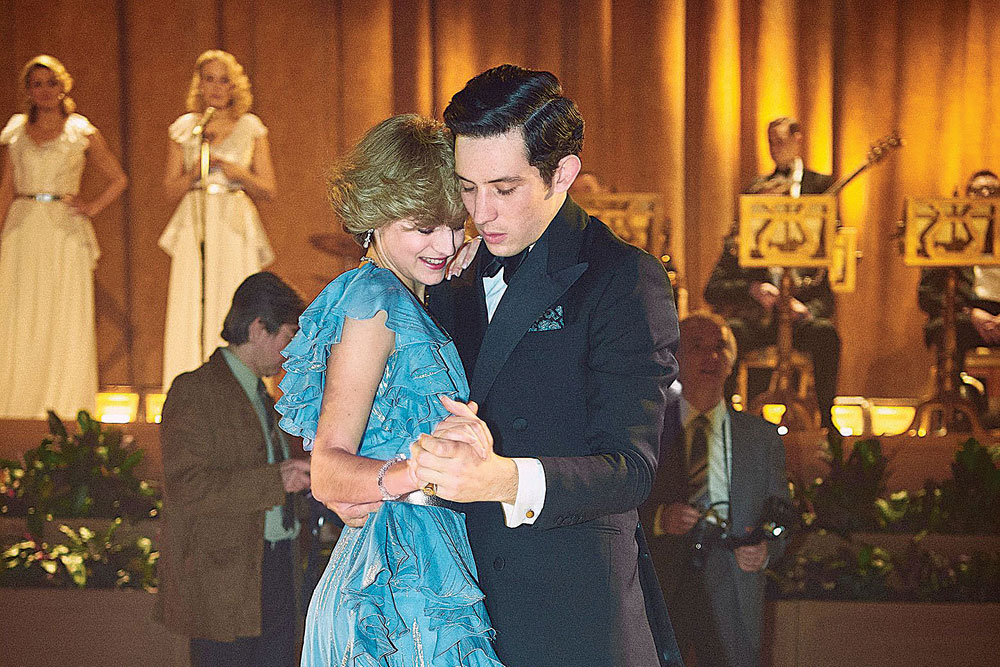 Emma Corrin and Josh O’Connor in The Crown (Courtesy: Netflix)


WHEN WE FIRST see her in the fourth season of The Crown, which dropped on Netflix on November 15th, Lady Diana Spencer is dressed as a tree. Hardly one of Diana’s show-stopping fashion moments, agrees 24-year-old Emma Corrin, the English actress trusted with playing the late princess through this season before handing over the baton to Elizabeth Debecki, who will play the Princess of Wales in her final years.

Corrin, who was cast in the role after several rounds of auditions, recognises the privilege and the responsibility. Diana, Princess of Wales, was arguably the most loved member of the British royal family. Wife of Charles, mother of William and Harry, and the subject of many biographies, documentaries, and scandals, Di, as she came to be known, remains a figure of mystique, and the recipient of adoration and sympathy, more than 20 years after her tragic death as the result of a car crash in a road tunnel in Paris at the age of 36, in 1997.

“I was terrified when I got the job,”

Corrin reveals. “Unbelievably nervous,” she adds earnestly while chatting over a Zoom call. But, she explains, she became comfortable when she started to think of these parts as (writer and creator) Peter Morgan’s versions of the real people. Anyone who has ever seen a video of the real Diana will tell you Corrin has the Princess’ voice down pat; the other mannerisms are also freakishly similar. But beyond the tics, it’s a respectful performance that conveys the spirit of the tortured princess.

Also on the call is Josh O’Connor, the 30-year-old English actor who plays Prince Charles opposite Corrin. Having first appeared as the Prince of Wales in the third season of the show, O’Connor didn’t have the same nerves going in, but jokes that there isn’t very much he can do to endear the Prince to viewers. As the man who was always in love with another woman—one he was forbidden from marrying—Diana loyalists are unlikely to look at him with a fresh set of eyes even though the new season is a tad kinder to him than the tabloids have ever been.

Excerpts From a Conversation

The Charles and Diana story is one that people around the world are familiar with. It’s been documented so extensively. And yet was there anything that caught you by surprise, or that you found especially fascinating when you were preparing to play these characters?

Emma Corrin: That’s such a good question. Yes, they are so well documented, and initially it was very hard to overcome all the information that’s out there about them. We both felt quite drowned in it, to be honest. But the wonderful thing was getting the scripts and figuring out that this is Peter’s world and these are his characters that we’re playing. I really enjoyed finding out how much Diana loved to dance. Those were some of my favourite scenes to film. That was a lot of fun; I didn’t know that she was such a fan.

Josh O’Connor: I think everything about them was a discovery for me. The most instant discoveries for me were while just doing a scene. Emma’s a brilliant actress to be acting across from, and I suppose the joy of being an actor is that you turn up and you think you’ve got the scene all planned out, and you see that Emma’s doing something ridiculously good. And you’re like, ‘Okay, think again.’ Those discoveries that you find together—that’s often the thing that gets you excited.

Emma, what was it like playing Diana over the course of the season? When we are first introduced to her, she’s just a girl smitten by the idea of meeting a prince. By the end of the season, she’s changed considerably. How was it playing her at these different stages?

Corrin: To have that kind of trajectory is a gift for an actor. When I first read the script I thought it was very interesting, because Diana’s life is so well-documented when she’s older—in fact, over-documented some might say. So it’s good to have that juxtaposition. It’s good to see that innocence and her youth going into it, in order to understand where she goes at the end. 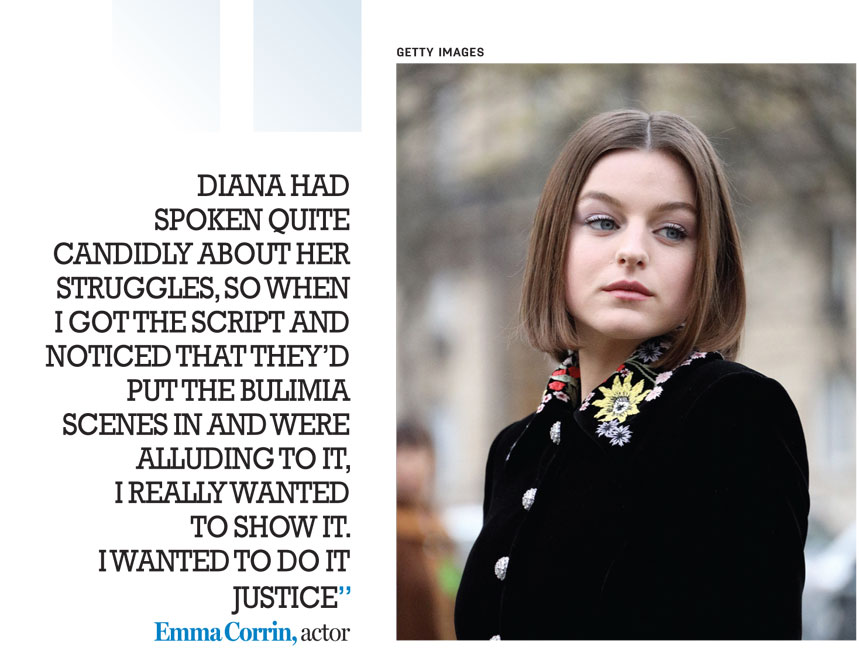 The show addresses Diana’s struggles with bulimia and mental health, and some of those scenes are hard to watch.

Corrin: It was something that I was really concerned about getting right. Diana had spoken quite candidly about her struggles, so when I got the script and noticed that they’d put the bulimia scenes in and were alluding to it, I really wanted to show it. I didn’t want to just suggest that she was going through these things. I wanted to do it justice, because I think it’s important, especially these days, to represent it on screen.

And they weren’t the easiest scenes to film. I had underestimated how hard they would be. But I felt they were important and so I committed to them.

Josh, in the last season of the show we saw that Charles was overcome by isolation, he felt disconnected from his parents, and betrayed for not being allowed to marry the woman he loves. It helped us understand him in a way that he doesn’t come off entirely as Diana’s villain in this new season. Were you grateful to have established that? Especially because now we do see what a knob he can be when he suggests, even before their marriage, that Diana have lunch with Camilla.

O’Connor: I know, that is a massive fail, isn’t it? (Covers his face in mock embarrassment) Look, I’m unbelievably grateful to have that little period in Season Three, because when I took the role on I had some reservations. And one of them was: How the hell am I going to do this show and come off in any way other than have the whole world hate me? So they said to me, ‘Look you’ve got Season Three, try and win over some hearts and then hopefully you can get away with some stuff.’(Laughs)

To be fair it wasn’t just Season Three, it was also the fact that Emma and I worked together to try and make the marriage believable. Because in a [failed] marriage, it’s not that simple…that one person is the villain, and one person is the angel. I think both parties are guilty.

Contrary to the popular belief that this marriage was doomed from the start, this show suggests that there was in fact love between them, and that they did in fact try to make their marriage work. Did that change your own perceptions?

O’Connor: I think so. One of the first things I did in terms of research on this season was to understand that it was no point going through accounts of Diana and Charles’ real-life marriage because you’ll never find the truth if you look in the press, or if you look through accounts from either Diana, who’s talked about it a little bit, or Charles, who’s never talked about it. It’s very hard to know what their reality is. So a lot of my research was about marriage breakdown, full stop. 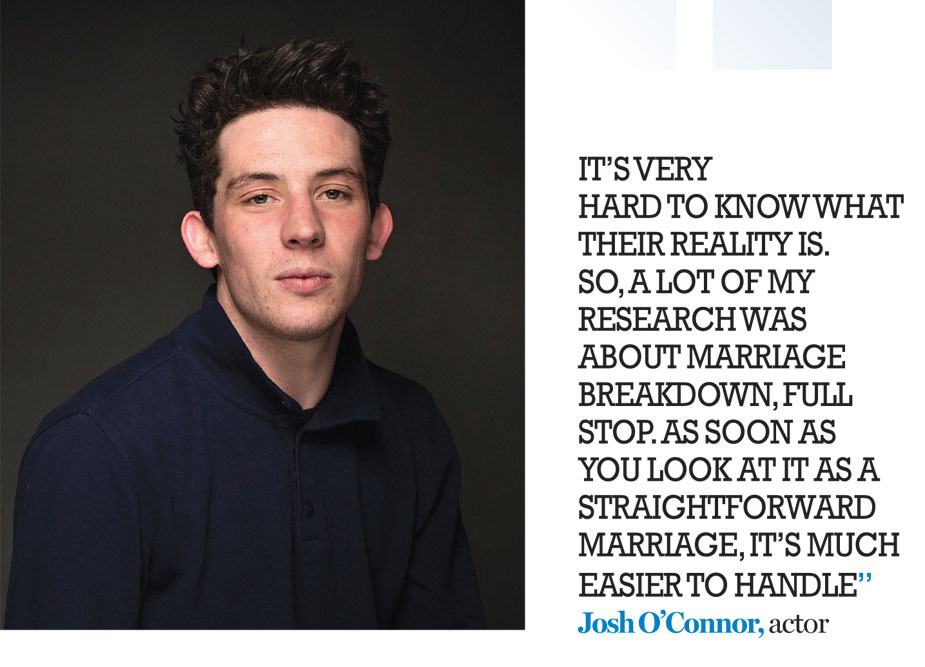 In any case, Emma and I always had the out—we didn’t have to tell the end of the story. And we all know the end. But I believe there must have been love there; even if that love was a different kind of love. For instance, in the ninth episode, Charles is looking on at his kids and Diana in the swimming pool, and you can see that there’s so much love for Diana as a mother and a partner. [It’s sad] that they just couldn’t offer each other what they needed. As soon as you look at it as a straightforward marriage, it’s much easier to handle.

Corrin: Josh has really hit the nail on the head. The joy for us was discovering the complexity and nuances of their marriage. And that was a really interesting thing.

Both of you have said that you saw these people as fictional characters—as Peter Morgan’s version of Charles and Diana. And yet you do the little things that one recognises about them. How long did it take to ace these details: Emma, the head tilt, the voice; Josh, the speaking through gritted teeth, the hand wave, checking the cufflinks?

Corrin: They’re really great on The Crown because they give you a lot of time to prepare. I got the role in March and we started shooting in September, so it’s a nice chunk of time to get ready. And you do need that time, because as you said, it’s a lot, and it took me a long time to get them completely down. I had a really wonderful movement coach and a voice coach. And with both those things we not only worked at replicating her voice and to include some of her mannerisms, but really to justify why she tilted her head in that way or gestured in that way, or why she spoke in the way that she did.

O’Connor: Those things are so helpful in just getting you in that space. But the moment I always feel really comfortable in a role is when you’ve done all that work, and you can put it on the backburner and really focus on the creation of the character. Things like [fixing] the cufflinks and the wave…that’s all great. And it helps you at times. If I was ever struggling, I’d find that I’d just do my little cufflink trick and no one will know that I’m not doing any good acting. So it’s quite a good distraction technique. But beyond that, the exciting bit is when you’re getting to act with each other and create stuff.

Emma, so much of Diana’s iconography was her fashion, her tiaras, that wedding dress. Did you enjoy recreating some of those looks, and did you have to pinch yourself when you looked in the mirror sometimes?

Corrin: I actually loved recreating some of her looks when she was younger. She wore a lot of very iconic jumpers—there was one with sheep on it, and one with a llama on it, I think. There were some moments where I really saw the similarity but it was more hearing it from other people. I know that when Olivia [Coleman] and Gillian [Anderson] and some of the others saw me in costume on the first day, they completely freaked out. That was really funny.