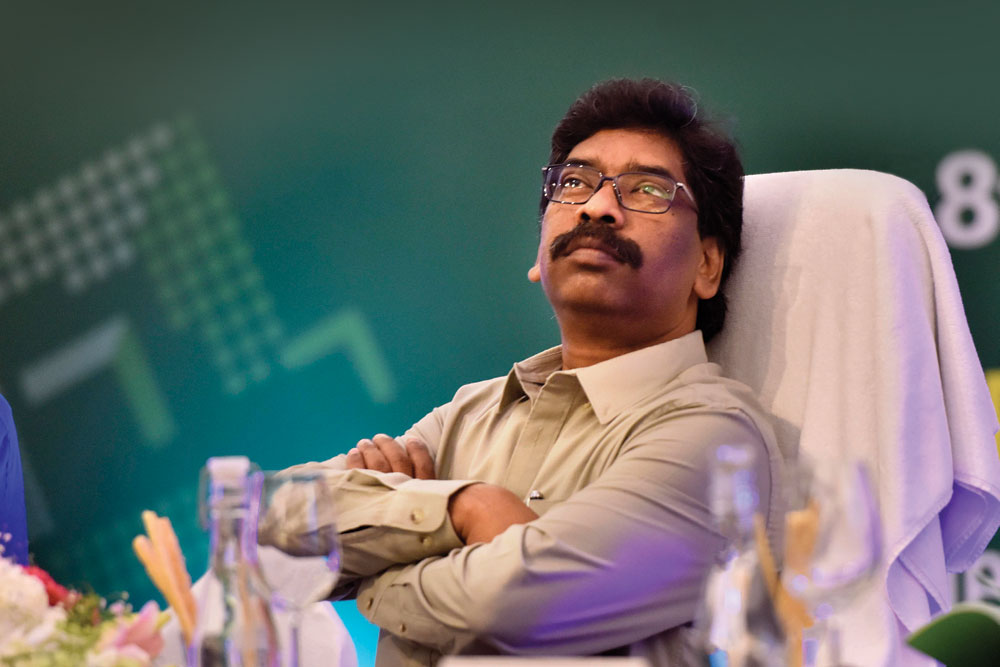 
ON THE FACE of it, there is little similarity between Shibu Soren and his son Hemant Soren. With his long hair, flowing beard, dhoti, kurta and gamchha, activist and founder of the Jharkhand Mukti Morcha (JMM) Shibu Soren is seen as a messiah of the tribal people. Inheriting his political legacy, Hemant Soren, the soft-spoken chief minister often seen in jeans and a T-shirt, turned the focus to governance of the 21-year-old state. But both Sorens seem to be haunted by the cases against them. If criminal cases hounded Shibu Soren through his political career, his son now faces allegations of graft.

In 2008, when Hemant Soren signed a mining lease agreement, he would not have foreseen that about 14 years later it could cast a shadow on him and his government. His affidavits filed before elections, till 2019, say “lease agreement with Jharkhand government in the year 2008, right now under process for renewal”. Soren went on to become chief minister in 2019 and also held the mines, environment and industry portfolios. In June 2021, the District Mining Department, Ranchi, issued a letter to him accepting his Letter of Intent (LoI) for stone quarry mining for 0.88 acres of land at Mouza-Angara. Three months later, Soren sought environmental clearance (EC) from the State Environmental Impact Assessment Authority (SEIAA).

By February this year, trouble—legal and political—had started mounting for the chief minister. His rival and predecessor Raghubar Das led a Bharatiya Janata Party (BJP) delegation to Raj Bhavan, submitting a memorandum seeking his removal as chief minister and disqualification as an MLA. In the memorandum submitted to Governor Ramesh Bais, a former BJP leader who was minister of environment and forests in the Vajpayee government, the party accused Soren of misusing his office and allotting mines in his own name, violating the code of conduct for chief ministers and ministers. The memorandum said it was in violation of the constitutional provision under Section 9A of the Representation of the People Act, 1951, which relates to disqualification for government contracts, and sought action against Soren for ‘misusing’ his office for personal gain. Bais referred the matter to the Election Commission which is understood to have written to Chief Secretary Sukhdev Singh for authentication of the document related to the mining lease allotment to the chief minister. The matter came up in the Supreme Court and Jharkhand High Court through public interest litigations (PILs). Advocate General Rajiv Ranjan, representing the government, had informed the court that the granting of the lease was a “mistake” and the chief minister had already “surrendered” the lease. In the Supreme Court, the PIL alleged a nexus between the mining department of Jharkhand and Soren in the grant of stone mining lease to the chief minister. In April, the Jharkhand High Court issued a notice to Soren over a petition seeking a probe into the assets of the chief minister and his brother Basant Soren beyond their known sources of income, alleging money laundering through shell companies.

Even as these allegations were under scrutiny, Das came out with another string of accusations—the chief minister’s wife Kalpana being given 11 acres of land in an industrial area in Ranchi, his political representative Pankaj Mishra a mining lease in the name of Mahakal Stone in Sahebhanj and press advisor Abhishek Prasad a mining lease in the name of one Shiv Shakti Enterprise of 11.70 acres, also in Sahebganj district. “This is in violation of the code of conduct for chief ministers. Instead of the tribals, he is helping his family. Hemant Soren should himself resign. We have demanded that all these allotments be cancelled,” says Das, who has been at the forefront of the campaign targeting the chief minister.

JMM calls the charges baseless, ruling out any ‘office of profit’ case, saying Soren had already surrendered the lease and had not got even a rupee as revenue from it. It also says no rule was bent in the state industry department in allotting a plot to a company owned by Kalpana Soren as it was an open process that was duly advertised.

“The government is stable and Hemant Soren will complete his full term,” says JMM leader Supriyo Bhattacharya. On Soren’s aides getting land, he claims it was allotted in 2016 during Das’ tenure. A JMM delegation also met the governor and urged that the Election Commission look at its side of the story as well. JMM perceives BJP’s onslaught as a sign of a restless party trying to destabilise the state government which has been in power for over two years.

However, to add to Soren’s unease, discontent had started brewing within the JMM-Congress-Rashtriya Janata Dal (RJD) coalition, stitched together by him ahead of the 2019 Assembly election. JMM had won 30 of the 81 seats, Congress 16 and RJD one, leaving JMM dependent on Congress for its survival in government. After Congress’ RPN Singh, who was in-charge of party affairs in the state, quit and joined BJP in January, Congress leaders have been demanding more say in the common minimum programme (CMP) to run the government. However, there is no major rebellion in the ruling coalition and state Congress leaders say they are standing by Soren, as of now. BJP, which faced defeat at the hands of the JMM-led coalition in 2019 when it was confident of another term, has been keeping a close eye on the developments.


IT WAS IN 2019 that Soren had managed to come out of his father’s shadow and lead the party into the Assembly election, forming an alliance with Congress and RJD. Shibu Soren had led a political agitation for a separate state of Jharkhand where tribals constitute 26 per cent of the population. In the Assembly, 28 seats are reserved for them. Hemant Soren reached out to constituencies beyond JMM’s traditional support base of tribals. While campaigning for the 2019 polls, he had told a group of journalists at Daltonganj in Palamu, an area bordering Bihar which has a large population of Hindi speakers, that the nature of the party called for a paradigm shift from agitation to governance.

The allegations against Hemant Soren bring back memories of past taints on the Sorens. Shibu Soren, popularly known as ‘Guruji’, had to quit twice as union minister over allegations against him. But the charges did not dent his popularity among the tribals

The recent allegations, however, bring back memories of past taints on the Sorens. Shibu Soren, popularly known as “Guruji”, whose image has loomed over every state election since the formation of Jharkhand in 2000, had to quit twice as Union minister over allegations against him. The 1975 Chirrudih massacre case, in which he was named as one of the main 69 accused, kept hounding him. It involved the killing of 10 people, including nine Muslims, in clashes between tribals and Muslims. Soon after the Manmohan Singh government came to power in 2004, a warrant was issued against him. He first went underground but later resigned after Singh asked him to do so. After a month in judicial custody, he was released on bail and re-inducted as coal minister following a deal for a Congress-JMM alliance before the 2005 Assembly polls in the state. In March 2005, the Jharkhand governor invited him to form the government but he could not manage the confidence vote and resigned within 10 days, the shortest of his three stints as chief minister. Shibu Soren returned as Union minister but again in 2006 had to resign in the wake of his conviction for the 1994 murder of his former secretary Shashi Nath Jha who it was said had got to know about the monetary deal between Congress and four JMM MPs, including Soren, to save the then minority PV Narasimha Rao government which was facing a no-confidence motion in 1993. Soren’s role in coal block allocations during his tenure as coal minister in 2006 had also been questioned. He swung between Centre and state, between alliances with BJP and Congress, between activism and fighting cases.

The charges against “Guruji”, court hearings, convictions, the political deals and opportunism did not leave him unscathed but failed to dent his popularity, particularly among the tribals who revere him. They say there is no tribal village in the state which he has not visited. “JMM is not new to controversy. Corruption was never an issue in the Jharkhand election and it did not affect Shibu Soren’s vote bank,” says Yashwant Sinha, former Union minister and erstwhile BJP leader from Jharkhand.

Trouble is mounting for Hemant Soren. His predecessor Raghubar Das led a BJP delegation to Raj Bhavan, submitting a memorandum seeking his removal as chief minister and disqualification as an MLA

For Shibu Soren’s son, it may not be as easy to escape the political repercussions of the allegations against him. Former BJP leader Saryu Rai, who defeated Das, the only chief minister to last a full term in the state, in his Jamshedpur East constituency fighting as a rebel after BJP denied him a ticket, says the cases against Hemant Soren leave him in an uncomfortable position. But Rai doubts if it can lead to a crisis that threatens to bring down the government. “This is more of a case of conflict of interest, impinging on his personality and shaking the confidence of the people,” he says.

Soren had campaigned primarily on three themes—unemployment, poverty and the Chota Nagpur Tenancy (CNT) Act, 1908, under which non-tribals are barred from purchasing tribal land on the Chota Nagpur Plateau. Congress has been demanding a CMP, a blueprint for governance. Soren had chalked out a CMP with Congress in his earlier stint as chief minister in 2013. There have been reports that BJP, with just 26 seats in the Assembly, has been trying to woo around 10 Congress MLAs in an attempt to destabilise the Soren government. However, Congress state president Rajesh Thakur exudes confidence that as far as the numbers game goes the government will remain stable and allegations against Soren will not hurt the coalition. “It is a political agenda to grab power. BJP is coming out with new allegations to turn perceptions against the chief minister. He has already surrendered the land mining lease. We are with him,” he says.

The last word is yet to be said. In a state which has seen 10 governments in two decades, one never knows which way the tide will turn. 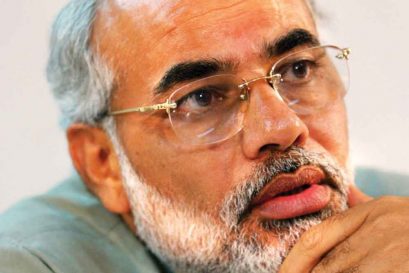 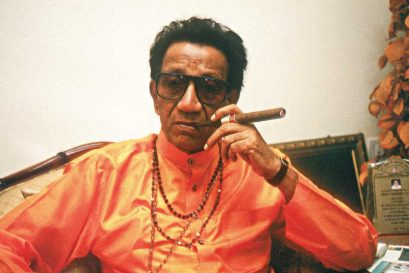