The Godfather at Fifty

The Godfather embodies the American dream, which is not merely about money and the immigrant making it big, but also keeping the family together while doing so 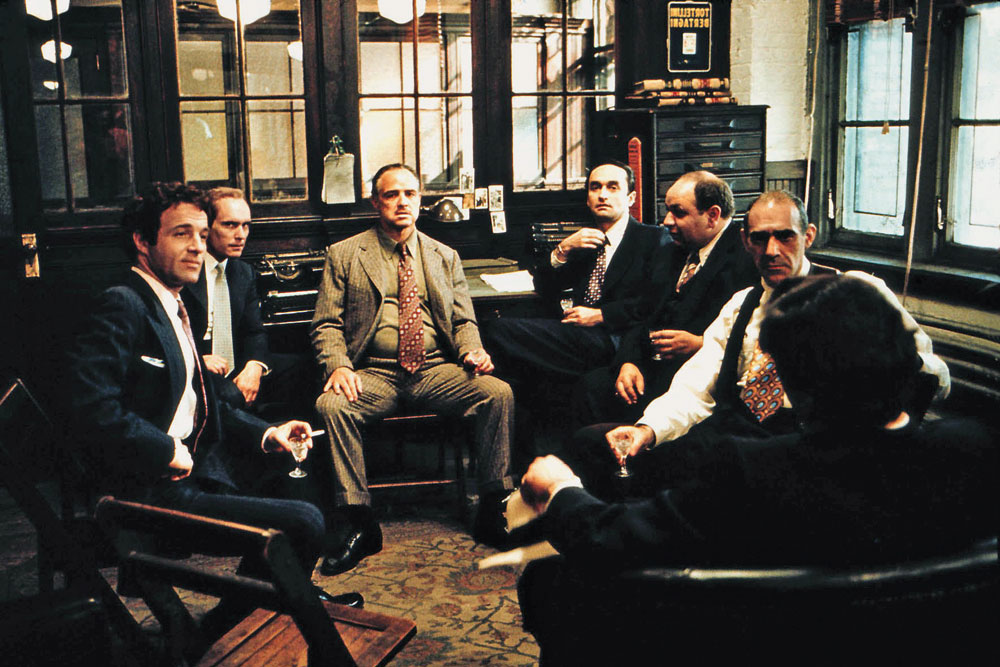 
WHAT MAKES A movie a cultural phenom­enon? Something that can be as fresh and exciting 50 years on as it was on the day of its release? Francis Ford Coppola’s The Godfather (1972), based on Mario Puzo’s 1969 novel, is that rarity. A story told with confidence, swagger and an immense belief in its own power.

It is after all the story of gangsters, thugs, of men who are dealing in guns and intimidation, blackmail and threat, hits and abductions. Yet, they all have a moral code. Thus far, and no further. They will not deal in drugs. They will not hurt women. They will never ever take sides against the family— the family that is held together by one of cinema’s greatest patriarchs, Don Vito Corleone, who lives by his own prin­ciples, prime among them being that he has to be respected. “I refused to be a fool,” he tells his son Michael in an emotional scene, “dancing on a string held by all those big shots.”

Don Vito’s was the American dream, that in time his son would be the one to hold the strings, as Senator Corleone or Governor Corleone, “but there wasn’t enough time,” he says, kissing his son’s cheek.

At the core of the film is the story about a father who loves his son and wants to protect him, and a son who loves his father and has no choice but to step into his shoes. It’s about another son, Sonny, who believes he is the perfect successor to the family business, but is temperamentally unsuited for the job. It’s about Fredo who is too weak to stand up for the family. It’s about the daughter, Connie, whose husband beats her and cheats on her. That is why some of the most affecting scenes in the movie involve the family—the wedding scene that is intercut with meetings which establish Don Vito’s power, and the baptism scene where his son Michael is unofficially declared the godfather as mayhem is unleashed on the streets of New York.

A man who doesn’t spend time with his family is not a real man, says Don Vito. Family is everything. Our DNA is destiny. Blood is thicker than water. In The Godfather, every cliché is true and played for all its dramatic worth, but with a stunning flourish. The prized stallion’s head in the studio boss’ bed, the fish wrapped in Luca Brasi’s bulletproof vest with the message that he sleeps with the fishes, Don Corleone’s repeated instruction to his son, “the man who comes to you to set up a meeting, he is the traitor.” It is the same reason a show like HBO’s series, Succession, works—at the end of the day, it is about a media empire and who will run it, but it is also about who loves daddy the most, and whom does daddy love the most.

The Godfather’s writing is not quite Shakespearean, but it is memorable. Consider it Holly­wood’s Sholay. Much of how we speak now is embellished by The Godfather’s great lines. “I’m gonna make him an offer he can’t refuse.” Or “revenge is a dish best served cold.” Or “a friend should always underestimate your virtues and an enemy overestimate your faults.” Or “it’s not personal, it’s business.”

The Godfather set the mould for every gangster epic that has followed. It is a deeply masculine world where women are easily dispensed with. Some, like Michael’s Italian wife, are blown to bits in a car bomb meant for him. Others like Connie are simply ignored. And yet, others like Michael’s WASP wife are lied to. Their rebellions don’t matter because they don’t matter. As Don Vito says: “Women and children can be careless, but not men.” The implication is clear— the women can treasure their Jane Austens and Charlotte Brontës, the men will worship The Godfather. It is their source of life lessons, their management mantras, their bro code. The Godfather liberates them from the morality imposed on them by society, authority and matriarchy. They can choose their consiglieres and their enforcers, their godfathers and their successors. The thrill of a secret society, where different rules apply, has engaged readers since the time of Lord of the Flies, William Golding’s 1954 novel about a group of boys stranded on an island and trying to govern themselves. Who doesn’t want to be rich, powerful, feared and respected? Who doesn’t want to be the last resort of those whom the legal system has failed, whether it is the undertaker or the singer? Who doesn’t want to be the guy who gets things done?

The Godfather is also a temple to male beauty. The almost irresistibly good-looking Al Pacino, shot in loving close-ups by Gordon Willis’ camera, in a star-making turn, rendered even the gorgeous Diana Keaton invisible; Marlon Brando, with his artificially enhanced jowls, each line on the face seemingly earned in a war; the young Vito of Godfather II, played by an arrestingly young Robert De Niro. It is not an accident that the men are regarded as the greatest living actors of today, and that they cut their teeth on this epic. With the men in finely cut suits and the women in beautiful dresses, it also puts a gloss on what is essentially a grimy world. Even murder looks splendid, whether it is Sonny getting shot or the heads of the five families getting slayed.

Its influence is global, from gangster movies in India to The Sopranos in the US. The Godfather was set during the 10 years of intra-mafia gang wars (1945-1955) in New York. It could be transposed to the coal mafia gangs of Wasseypur or the America of the 1990s where gambling and racketeering was rife. But The Godfather is an original, with its eminently hummable theme music, its serenely-lit outdoor scenes and its profound tragedies. In another series, somewhat influenced by The Godfather, Game of Thrones, Cersei Lannister says to Littlefinger, “power is power.” Sometimes, just showing a mirror to that, as The Godfather does, is enough.