The Cost of Long Covid

A tortuous road to recovery 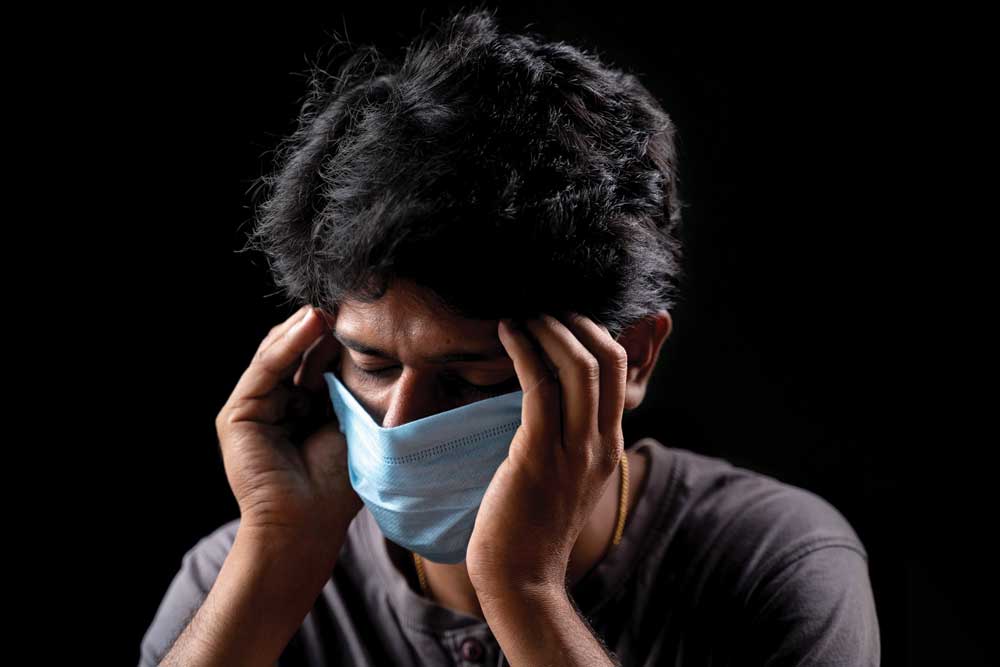 KERALA-BASED JOURNALIST C Viswanath was behind the wheel when he realised that he did not have the energy to drive. He takes pride in being able to drive eight to nine hours without a break, but this was not the day. Not even for eight to nine minutes. All he wanted to do was go back home and crash. With some effort, he stepped out and walked to the passenger seat and let his wife Geethu drive him home.

After reaching home, he called up his friend and noted physician B Ekbal. Viswanath disclosed to him that he had tested positive 18 days earlier and had since tested negative—and that the fatigue refused to go away. “After listening to me, he said what I had was ‘long Covid’. It was the first time I had heard of this expression.” The journalist spoke to other doctor friends as well, only to hear of ‘long Covid’ again and again. It might take weeks to months for him to recover completely, he was told.

Long Covid is a term to describe the effects of Covid-19 that continue long after the initial illness. According to the US Centers for Disease Control and Prevention, long Covid is a range of symptoms that can last weeks or months after first being infected with the virus that causes Covid-19 or can appear weeks after infection. ‘Long COVID can happen to anyone who has had COVID-19, even if the illness was mild, or they had no symptoms,’ it adds.

Doctors at Covid hospitals across the country that Open spoke to aver that cases of long Covid are on the rise in the country and that many people are at their wits’ end about how to tackle this condition that makes one infirm, even months after testing negative for Covid and even after getting Covid twice and thrice.

Extreme lethargy is something that worries patients a lot, resulting in depression and anxiety, but some doctors believe that the only solution is prolonged treatment or rest, or both, before the patient recovers fully. The worst part is, naturally, the inability to carry out daily chores and work, leading to people being indisposed. “At this time, when job insecurities are high, it is impossible to stay away from Zoom calls and work from home (WFH) commitments. In fact, we work more hours now than we used to. And so, when you don’t recover even after you test negative, it becomes an issue for your bosses. The problem is one cannot concentrate for more than a few minutes,” says Vinay Thapa (name changed) who works with a logistics firm in Mumbai.

Similar stories are shared across the board—from a 40-year-old project manager and mother of a teenager in southwest Delhi’s Dwarka neighbourhood who was hospitalised in the first Covid wave and continues to battle fatigue and loss of appetite, to a 61-year-old grandfather and businessman who contracted tuberculosis in a north Delhi hospital while being treated for Covid, lost 11 kg, developed pain in his legs, and is still debilitated eight months later.

Viswanath tells Open about not being able to work well and the concomitant frustration. He had pain and weariness in his legs and was forced to stay away from work. “My employers understood my situation and so I didn’t have any problem at work,” he says, adding that his wife also had similar symptoms after testing positive in April. Geethu has not yet got back her sense of smell and taste, and cannot sleep well either, which throws things out of gear for the whole family. Their two daughters, both aged below 8 and who also tested positive, did not have as many difficulties except muscular fatigue of the legs.

Open spoke to many people who either got re-infected with the coronavirus or had a long recovery time to normalcy after being infected. Most of them spoke of a weeks-long ordeal with exhaustion and loss of orientation, besides insomnia.

Hyderabad-based Dr Raghavendra Reddy, a pulmonologist, prefers to term ‘long Covid’ as post-Covid complications which, according to him, are of three types: fibrosis (where lung tissues become scarred), diabetes, and myalgia (pain in the muscles). “Most often people discover they are diabetic or prediabetic when they are tested after Covid. We are a country where people don’t do regular health checkups and so it was always there, not that Covid or steroids caused it,” he says, adding that there isn’t much to worry about fatigue alone because it goes away eventually. In his experience, some of his patients recovered after a few weeks while others needed oxygen even after months. But then extreme tiredness takes a natural toll on people, he affirms.

He himself had long Covid and had to stay away from work for weeks until he regained enough strength. Like Viswanath, he also had problems with driving and concentration.

For her part, mental wellness expert Dr Rachna Khanna Singh, head of the Department of Holistic Medicine and Psychology at Artemis Hospital, Gurugram, says that she comes across numerous cases of long Covid where the most common aspect is anxiety disorder. “Most of them are under constant fear of being re-infected and contracting black fungus. Isolation also triggers deepseated fears about death and other diseases. They need prolonged treatment for this condition,” explains Singh. Black fungus infection, also known as mucormycosis, is caused by a fungus called mucor. Cases of Covid-induced mucormycosis have risen sharply recently, mostly among those who are diabetic.

Two Mumbai-based doctors who spoke to Open say that while each long Covid patient needs to be monitored for weeks to ensure that they reach a “viable state” physically and mentally, with hospitals under tremendous stress thanks to high infections over the past few months, such efforts are not fruitful. One of them told Open on condition of anonymity, “With people dying in large numbers, those who survive with long Covid end up not getting proper treatment and have to suffer a long period of uncertainty and shock as they recover. That trauma may cause both physical and mental damage. Governments need to take the issue of long Covid seriously. As of now, it isn’t happening.”

He adds that those who ‘discover’ new afflictions, such as diabetes, face daunting odds as the fatigue adds to mental discomfort and stress. A study published in Lancet in January this year by a team of researchers who worked on patients in a hospital in Wuhan, China, found that more than 75 per cent Covid-19 patients had at least one symptom even six months after their discharge from the hospital. Covid-19 vaccines tend to alleviate the symptoms of long Covid, according to a large survey of more than 800 people that suggests mRNA vaccines, in particular, are beneficial. In total, according to the report in Lancet, 1,733 of 2,469 discharged patients with Covid-19 were enrolled after 736 were excluded. ‘Fatigue or muscle weakness (63%, 1038 of 1655) and sleep difficulties (26%, 437 of 1655) were the most common symptoms. Anxiety or depression was reported among 23% (367 of 1617) of patients,’ the report said.

The conclusion from the report is that ‘patients who were more severely ill during their hospital stay had more severe impaired pulmonary diffusion capacities and abnormal chest imaging manifestations, and are the main target population for intervention of long-term recovery.’ A Lancet editorial last month called for a thorough research into neurological effects of long Covid in patients. Other studies have confirmed long Covid even among children.

PREMANKA GOSWAMI, A NOIDA-BASED EDITOR WITH a publishing company, did not test positive for Covid but had all the symptoms of the viral disease. He had high temperature for days and then he decided call up a renowned pulmonologist. The doctor advised him to take Covid medicines, saying that he had a mild asymptomatic Covid. “My oxygen levels were fine but it was as if I was knocked down in a boxing fight,” he says. Goswami would try to focus on something but would end up heading to his bedroom to lie down in complete exhaustion. Like Viswanath, he also had a fear of collapsing. “It was not just weakness. It was a massive weakness,” Goswamy recalls. He could not eat and had also lost his sense of smell.

Meanwhile, to fight the onslaught of long Covid, doctors suggest that patients monitor various parameters, including oxygen saturation levels and sugar levels, and consult doctors besides eating right as they wade through the long road to recovery. They also have to watch out for mucormycosis or joint pains and report the matter urgently to the doctor. But it is not required for those suffering from fatigue after testing negative to isolate themselves, doctors note. More care needs to be taken by those with co-morbidities during this period. Some patients also experience heart complications during this time.

Often, people with long Covid are forced to exert themselves either to take care of a member of the family who tests positive for Covid or for the sake of getting back to work, and it is then that they realise things are not yet back to normal. “Such realisations come as a rude shock to some people. They slip into depression and anguish. Those with shortness of breath experience breathlessness and wheezing and may be coughing too because of exertion. I come across such cases very often. I think long Covid has a huge impact on family economies and the overall health of families. A more coordinated effort on the part of individuals, groups and the Government are needed to address this issue that often gets swept under the carpet in these times when people are grappling with loss and grief,” says a Delhi-based physician, who emphasises that most patients prefer to remain tight-lipped about this hardship out of fear of losing their jobs or being disbelieved. “As a result, it is not being discussed as much as it should be. Of course, the public focus on the high rate of infections and loss of human lives will naturally overshadow this issue,” he adds.

On April 1st this year, Arvinder Bhandoola’s father-in-law tested positive for Covid. Within a week, the entire family of five in Delhi’s Vasant Enclave neighbourhood also tested positive. While the 45-year-old homemaker and arts-therapy student was largely asymptomatic except for the loss of sense of taste and smell, her parents-in-law were hit harder despite having had the first dose of the Covishield vaccine. They had low-grade fever for almost five to six weeks, and both developed throat infection and Covid-related pneumonia. “In fact, the entire family had a similar symptom of feeling something stuck in the throat,” says Bhandoola, who lost her sense of taste and smell again this month for 10 days.

While research studies are yet to divulge more data and details on long Covid, cases of people suffering are still rising. Everything about Covid seems to be taking longer than expected to fade away.