Sunil Gupta: The Gaze of Memory 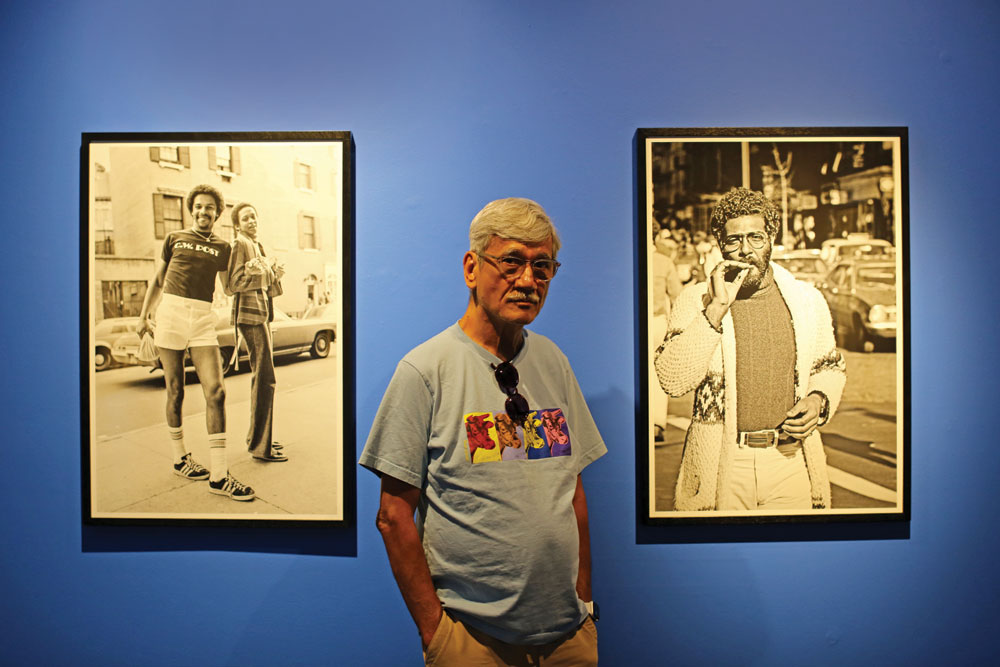 
The London-based photographer, Sunil Gupta, now 69, has been the cheer­leader of the gay liberation movement for over four decades. He has created deftly choreographed images that have sought to challenge the heteronorma­tive view of homosexuality. Part memoir and part academic portraiture of a his­torically maligned community striving for cultural assimilation, Gupta’s lens has reflected the struggles of LGBTQIA+ rights, queer identity, gender equality, migration and racism. He raised his voice for gay freedom before the phrase had been fully articulated. “I was gay at a time when it invoked the worst kind of prejudices in people, especially orthodox Indian families. Gay men were not a part of the Indian life, certainly they were not a part of art history in any way. Nobody else was photographing the gay life, so I thought of doing it myself,” says Gupta, who was born in Delhi in 1953. “The gay experience has been my lifelong subject. Looking back, I don’t know if I have been successful but I guess I’ve had a fantastic time living my life. My primary mission was to have as good a time as possible and to be as truthful, free and fair as I could be.”

Gupta’s ongoing solo show Cruising at the Vadehra Art Gallery, Delhi, bears testimony to how his life and work have been inextricably linked. If his life has been a fight against social norms, his career as a photographer has left its cultural mark by challenging the limits of queer aesthetics. The title Cruising is a nod to Gupta’s series of the same name shot during the 1980s, a decade when he attempted to replicate the old Delhi of his childhood of the 1960s. It’s “a memory of a memory,” as the academ­ic and activist Gautam Bhan writes in a catalogue accompanying the exhibition. While plenty of snapshots in Cruising gesture at old Delhi’s ruins and abandonment, it is when Gupta fills these spaces with people that the show truly comes alive.

Gupta’s work has always been driven by the energy of people. The presence of mostly gay men, with their tender touches and erotic glances, form­ing the cornerstone of his gaze. Take his photo essays of 1980s Delhi. They retain the power to shock even when seen from today’s contemporary perspective, reminding us that he’s been at it long before pride parades became cool and gender identities more complex. Particu­larly striking is his series Exiles, a counter-narrative featuring Delhi boys getting intimate in public spaces. Shot through much of the 1980s, it was first exhibited at the India Habitat Centre in 2004. It is full of furtive young lovers, who exude the desire and sensuality of Call Me by Your Name.


Two decades later, Gupta returned to the same territory for an encore. It was 2005 and there were radical changes sweeping across Delhi. The series Mr Malhotra’s Party was the result of his re-engagement with his home­town’s queer community. The title was inspired by an underground shindig he had attended at a pub in a south Delhi neighbourhood called Pegs n Pints. “I just wanted to look at where gay men were hanging out in Delhi in the noughties. Usually, it was at indoor places or private parties. Tuesday nights used to be ‘gay night’ at Pegs n Pints. To avoid suspicion, they would hang a sign outside indicating it was a private bash. The night I went in it was called ‘Mr Malhotra’s Party.’ I really liked the name and decided to use it,” Gupta says, with a laugh. Only later on did he realise that his neighbours were also called Malhotras. The title couldn’t be more playful, as it juxtaposes the most masculine of Punjabi surnames with inflections of homosexuality. “Malhotra is such a typical Delhi sur­name. Hardworking and enterprising, these Punjabi refugees built New Delhi after Partition. They are the soul of their city,” he says. Unlike the older cohort of Exiles, the younger men and women of Mr Malhotra’s Party were millennials and wokes, a bunch that has enjoyed relatively greater social freedoms than their parents’ generation. Needless to say, Gupta found them increas­ingly confident of their sexuality and more willing to embrace it. “Exiles was composed in and around public monuments and gardens but the loca­tions in Mr Malhotra’s Party were more vernacular, mostly near their homes or colonies,” he explains, adding, “The protagonists not only happily posed for their portraits but also gave out their names and identity. The young people who made the most impression on me during this time were the graduate students from JNU and Delhi University who had taken to talking about queer theory as an academic discipline. They were getting their ideas from universities like Yale and Oxford. It was the first time I had met a genera­tion in New Delhi who were calling themselves queer. I think that was advanced thinking.”

Gupta wishes the Nizamuddin East he grew up in was this progressive. But it was not. Instead, it was hidebound. Speaking about his own middle-class family, he says, “My father Sri Ram Gupta (an ex-army man) and my mother Penny (she taught at the Delhi Public School) were quintessential Indian parents. For me, there was no real coming out but I remember being barely 17 when I sort of confessed at home. The most shocking thing was my mother’s reaction. She wept copi­ously. It never occurred to her that I might be experimenting with sex, as horny teenagers usually do. She didn’t quite understand that I was gay. I think she just couldn’t imagine that I was having any kind of sex. It would appear that gender didn’t matter to her. She simply found the idea of me having sex at that age unaccept­able,” he says. His father, on the other hand, was more accepting “in the sense that he had a better idea what lads get up to at that age. He thought this might be a phase. His solution was to get me married off. As if getting married would fix everything. That’s a classic Indian take on homosexuality even today.”

For Gupta, photography was more than an escape. Hooked on to the camera from a young age, he had built a dark room for himself in a barsati where he took to developing his own photographic prints. “I had a friend in school who was also interested in pho­tography. Both of us have older sisters, so we would cast them as models,” he reminisces. In 1969— coincidentally, the year of the Stonewall riots in New York City—his family migrated to Montreal in Canada. There was no solid reason for looking West except the uncharted possibilities that travel entails. As he puts it, “It was the only way they could have seen the world.” After Montreal, his next stop was New York City. He had gone there to enrol in an MBA programme but ended up being intoxicated by its flourishing photography scene. Initially starting as a hobby, photography was now becom­ing a more serious pursuit for him. His acclaimed Christopher Street series from NYC, a selection of which is included in Cruising, brings to us glimpses of his life from “the most open city I have ever come across.” Compared to the buoyant spirit of NYC, London—where he has lived since 1977—which was “close, hidden and very anti-gay.” He adds, “Stonewall riots marked a cultural shift in the way Americans saw the gay com­munity. A sense of optimism was in the air when I was making the Christopher Street series. Never before in my life had I seen so many gay men occupying a public space so freely. The going was good, until AIDS came along.”

Diagnosed with HIV in 1995, Gupta’s recovery was slow, though he was lucky to pull through at all. Based in London at that time, he had access to medication that was free of cost. When he found out that he was positive his biggest fear was imminent death. And then, he thought, “Before I die, I should make some work about it.” When he tried to persuade his friends to collabo­rate, he simply received a cold shoulder. “There was a lot of stigma around AIDS. It was terrible,” he recalls. That’s when he decided to turn to his own body for fodder. Noted for its brutal investiga­tion of his invalid self, From Here to Eternity was eventually published as a book in 2020 to accompany his retrospective exhibitions in London and Toronto. The project bagged him the prestigious Kraszna-Krausz Book Awards, 2021, admittedly one of the high points of his career.

Looking back, I don’t know if I have been successful but I guess I’ve had a fantastic time living my life. My primary mission was to have as good a time as possible and to be as truthful, free and fair as i could be,” says Sunil Gupta, photographer

In recent weeks, Gupta has been in In­dia, travelling, partying and catching up with close friends. He also jokes that his colourful past is now firmly behind him. Happily married for more than a decade to his much-younger partner Charan Singh, he admits, “I didn’t think that I would someday settle down like this. For me, gay liberation was about having as many boyfriends as possible and as quickly as possible and suddenly, I am with just this one person. But honest­ly, I am enjoying it. Getting old together and all those clichés. Not too bad. I like to go to bed early these days. I feel like I am being looked after by somebody.”

Though Indian law still doesn’t recognise same-sex marriage Gupta is optimistic that the post-Section 377 world will pave the way for more social changes. He remembers being in the Delhi High Court in 2009 when homo­sexuality was decriminalised for the first time. “I cannot tell you how excit­ing that judgment was,” he recounts. “People were crying. My generation never thought we would live to see this day.” In 2018, in yet another landmark ruling, the Supreme Court struck down Section 377 that criminalised same-sex relations. An emotional Gupta remembers being glued to the news from his home in London that September day. The victory was hard won but the battle is far from over yet. “It’s very simple. We should get full hu­man rights that everyone else enjoys,” he says, though acknowledging in the same vein that the Indian attitude to­wards homosexuality is changing for the better. For instance, when he came back to India for the first time after his wedding one of his closest cousins and his wife showed up to welcome the newlyweds with affection and even performed an Indian wedding ritual. “It was very touching. What more can anyone ask for.”

(Cruising by Sunil Gupta runs at the Vadehra Art Gallery, Delhi, till September 16)