The ratings system is broken and the television industry knows it 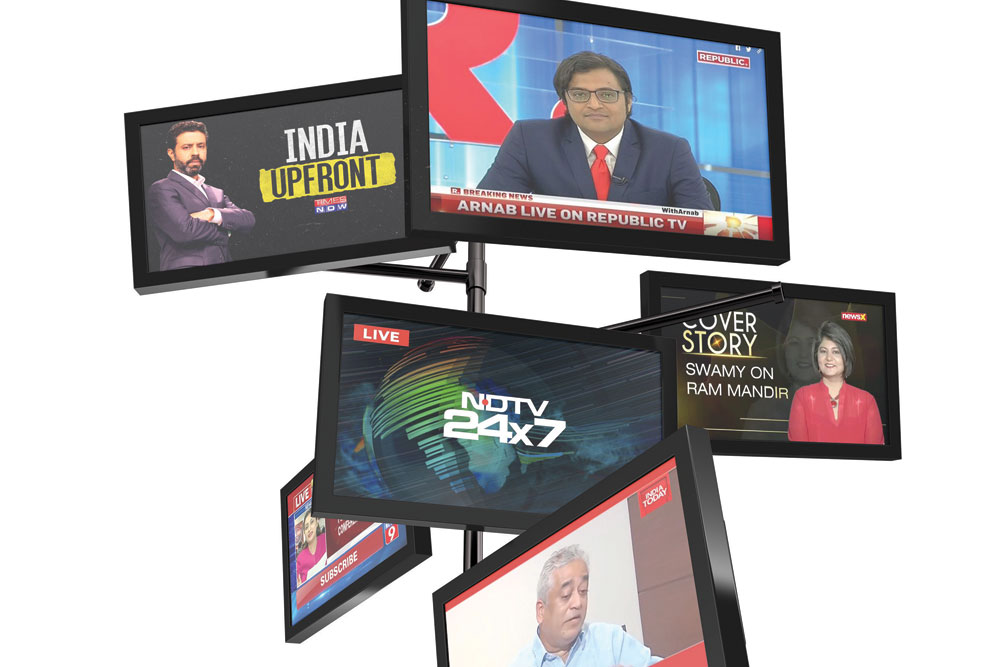 
CONSIDER THIS: EACH of the 44,000 Broadcast Audience Research Council (BARC) meters determines about Rs 75 lakh of advertising spend a year. And it is open to manipulation for a few hundred rupees a day.

And then this: News channels that are making the most noise about television ratings points (TRPs) are watched by a minority of the TV-viewing universe: exactly 7 per cent at the start of 2020, which went up to 21 per cent at the height of the Covid-19-induced lockdown in March-end, continuing to boom till June-end, before dropping back to 9 per cent of the total (with general entertainment channel viewership at a peak of 52 per cent and movies at 24 per cent).

And finally this: India has 20 crore (200 million) TV sets, over 700 TV channels in 15 languages and a TV ad spend of Rs 35,000 crore. It samples 44,000 households. The US, with 120 million TV sets, 1,000 channels mostly in two languages (English and Spanish) and a TV ad spend of $70 billion, samples 46,000 households. It delivers ratings only for national channels, considering niche channels too statistically insignificant.

News networks in India have been accusing each other of manipulating ratings after Mumbai Police Commissioner Param Bir Singh held a press conference to announce an investigation into the involvement of three TV news channels—Republic TV, Fakt Marathi and Box Cinema—in a TRP controversy. Don’t be fooled by the shock and horror: the Indian television industry has been here before. In 2012, NDTV sued Television Audience Measurement (TAM), a joint venture between Nielsen and Kantar Media, which had been measuring TRPs since 1998. It was enough for the Indian Broadcasting Federation (IBF) to take over the ratings mechanism, forming BARC with a 60 per cent stake to measure audience ratings, in conjunction with the Advertising Agencies Association of India and the Indian Society of Advertisers.

So given the News Broadcasters Association (NBA) is a member of the IBF, why can’t it make the measurement foolproof? Especially since such complaints have been made before in Madhya Pradesh and the south. NBA President and India TV Chairman Rajat Sharma admits that recent events have demonstrated, once again, that there are “weaknesses in the rating system, and BARC itself has acknowledged in its police complaints that metered homes are being manipulated”. The investigation has exposed that panel homes were being compromised by certain channels. It has been done with the help of ex-employees who are familiar with the system and aware which households are metered, he adds. The corrupted data is creating a false narrative on what India watches and is putting pressure on newsrooms, says Sharma, to make distorted editorial decisions. “The current atmosphere of toxicity, abuse and fake news is no longer tenable and is not in the spirit of journalism we have encoded in the NBA.” He says the NBA is working with the IBF to involve international experts to make the system robust.

Not a moment too soon. As veteran investor and marketer Mahesh Murthy points out, comparing TAM’s ratings to BARC’s is a little like competition between Haji Mastan and Dawood Ibrahim. “Both are fraudsters, but one wears suits and boots and pretends to be up to some international standard. There’s no difference really,” he says. TAM was owned by WPP, the same people who own media agencies Mindshare and GroupM. It was no surprise that it helped WPP’s media agencies make more money. For over 20 years TAM had less than 2,000 meters covering all of India. Which meant controlling a mere 100 households across India could get consistent TRPs of five.


News networks have been accusing each other of manipulating ratings after Mumbai Police announced a probe into three TV news channels for a TRP controversy. Don’t be fooled by the shock and horror: Indian TV industry has been here before

It was convenient for everybody, points out Murthy. Here’s how: It was a time of 500 channels, 15 crore TV sets and TV ad spend of Rs 20,000 crore. No media agency wanted to deal with 500 channels with average TRPs of 0.2 each. It was too much hard work. It was so much easier with two or three channels with TRPs between five and 15. “So rather than writing 500 insertion orders for air time at rates of Rs 1,000 per 10 seconds, the bigger agencies much prefer to write three orders for airtime at the rate of Rs 1 lakh for 10 seconds. They make more money from their fees, their media commissions and their undeclared kickbacks from TV channels—and all for less work. And those five channels make more money too. Win-win for everyone, except clients,” adds Murthy.

But when the rest of the media discovered this and created BARC, the ostensible goal was to generate more accurate ratings for television. In effect though, the result was only marginally better. We’re now in a universe with 20 crore TV sets, over 700 TV channels and a TV ad spend of Rs 35,000 crore. It’s easy to see that BARC’s 44,000 households are not any great statistical improvement. Especially when everyone on the ground knows where the 44,000 households are.

Such a sample size and that too compromised is woefully inadequate to help determine where Rs 35,000 crore of ad spend should go. Especially in this age of digital options. A better solution has to involve more sampling and not be fixable. It’s not difficult. One can put in two-way set-top boxes in lakhs of households. Meters can cost less than Rs 5,000 at scale and be deployed in lakhs and hence be resistant to all but brute-force fixing. Everyone watches TV with their phones near them. One can build an app that ‘listens’ to what’s on TV and sends data on an anonymous basis to a central server with the user’s permission. And this app can be downloaded in the crores. All of these can easily improve TV ratings. Provided TV ratings want to be improved. 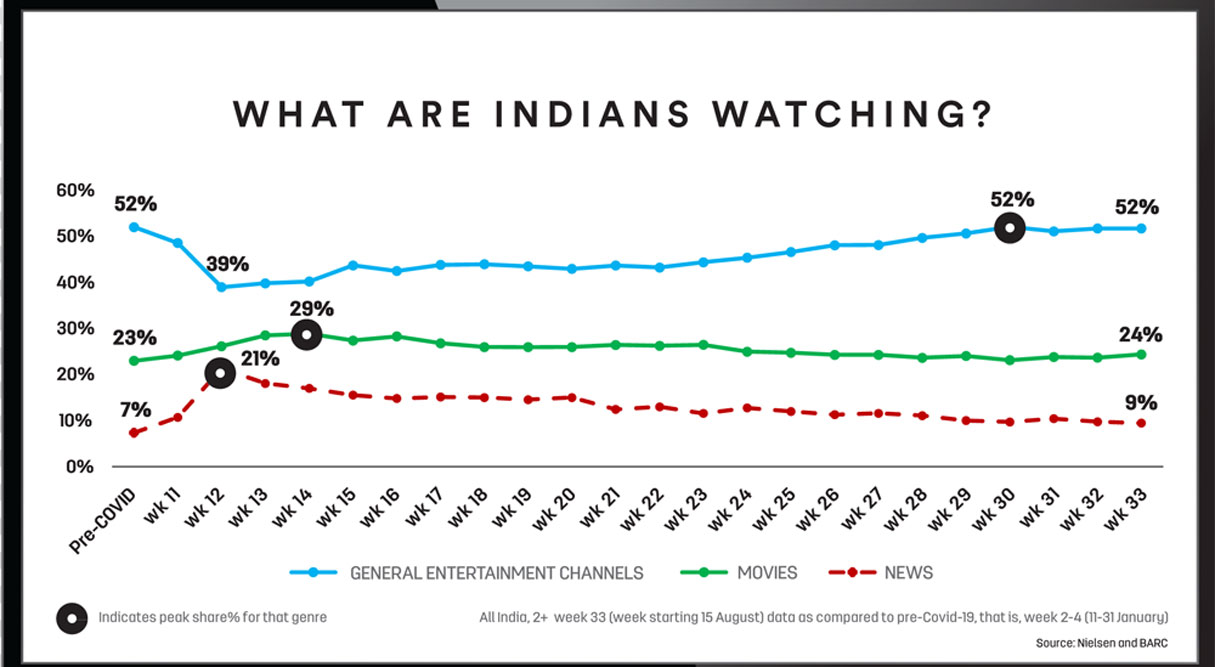 THE TECHNOLOGY EXISTS. Solutions are affordable too. And these have been presented multiple times to the agencies, the TV channels and BARC. But no one is listening. It will mean a complete overhaul of how money is allocated. For instance, the cost of a 10-second spot on the Indian Premier League (IPL) was Rs 10-15 lakh last year. This was 50-100 times more than the cost of spots on a typical lowbrow channel. Agencies would earn more selling one ad spot on the IPL than selling 100 elsewhere. For less effort. Because it was assumed that the IPL had 50-100 times the TRP of those other channels.

What if, hypothetically, asks Murthy, you did authentic ratings and found that the IPL had ‘only’ 10 times the ratings of say ETV Marathi? Would you pay more for ETV or less for IPL? “I believe you’d do the latter. In that case Star would not end up paying Rs 17,000 crore for five years of IPL rights, so teams would not cost so much and maybe football or kabaddi could make its way more into our consciousness,” he says.

It will also show us exactly how much should be spent on TV and digital advertising. India has 60 crore internet users, who spend more time on their phones than on the TV sets in their homes. But the country spends almost half on internet advertising than it does on 20 crore TV sets. In the US, meanwhile, internet ad spend has eclipsed TV ad spend. It’s tougher to control access on Facebook and Google than it is to master TV ratings in India, so the cycle continues.

In a television market as segmented by language and genre as in India, the current TRP model is just not good enough to give you an accurate reflection. For that to change, it will require much less hectoring of others and much more introspection

Arvind Rajagopal, a media studies professor at New York University, gives a historical perspective to the whole debate, pointing out that Indian TV was not organised around viewer feedback when it was established. Doordarshan was a monopoly after all. Viewers began to be counted by private agencies when sponsored programmes began to earn significant revenue. They were called “national readership surveys”, suggesting that the mindset of survey research was not fully abreast with the new technology.

It was common knowledge, he says, that households with meters were paid to tune into one or other channel. “In the states, the most politically powerful channels always got the highest ratings even when this was far from the truth. Money and muscle power were always used to silence any critics. The tilt away from public to private became clear when TAM surveys omitted any mention of Doordarshan even though it was the most watched channel. There was no protest from the Government until SY Quraishi, then Director General of Doordarshan, initiated inquiries that led to the formation of BARC. But BARC too, instead of acting as a public service, allowed media companies to skew the numbers,” he says. Quraishi even wrote about this recently in a national newspaper. He tells Open: “Even now there is no change in either the basic system or the technology. Only the controlling organisation has changed, from TAM, which was controlled by Nielsen, to BARC.”

It is something the Government itself has allowed, with private channels eroding its public service. How and why this happened deserves investigation, points out Rajagopal. We are often taught to denounce the era of government monopoly media and to celebrate liberalisation of the airwaves. But giving broadcasters freedom on the airwaves has not necessarily led to better news and entertainment for the public as a whole. ‘Free flow of information’ was a Cold War-era American idea, designed to promote commercial entertainment throughout the world, in the name of democracy. In the US this has led to a situation reminiscent of the Civil War, where no common ground exists between warring sides.

The technology exists. Solutions are affordable too. And these have been presented multiple times to the agencies, the TV channels and BARC. But no one is listening. It will mean a complete overhaul of how money is allocated

The civil war in the Indian case is staged between political parties, fought through proxy TV channels and friendly anchors. ‘Fake news’ has extended deeper and wider in India and affected even the information that industry insiders rely on. Ratings corruption is part and parcel of this privatisation, with the general public also among the losers in the bargain. But what about businesses: should they not demand that they get their money’s worth when they spend on advertising? Or are they too nervous to challenge the powers that be?

In a television market as segmented by language and genre as in India, the current TRP model is just not good enough to give you an accurate reflection. For that to change, it will require much less hectoring of others and much more introspection. Longtime observer of TV and founder of Indiantelevision.com, Anil Wanvari, feels leakages on account of human intervention due to greed can happen in perfect systems too, but that does not mean the system is bad, it’s the humans who are. He believes news channels need to be subscription-driven, rather than purely dependent on advertising. Additionally, advertisers and agencies need to understand that news brings with it quality audiences, not the masses that general entertainment shows bring. “The barometer of investing for advertising needs to be the quality of editorial, its voice and quality of production as well and the internal numbers the channel’s team provides,” he adds. If that happens, it would really be breaking news.