Can the Junior Wimbledon champion become the next big thing in tennis? 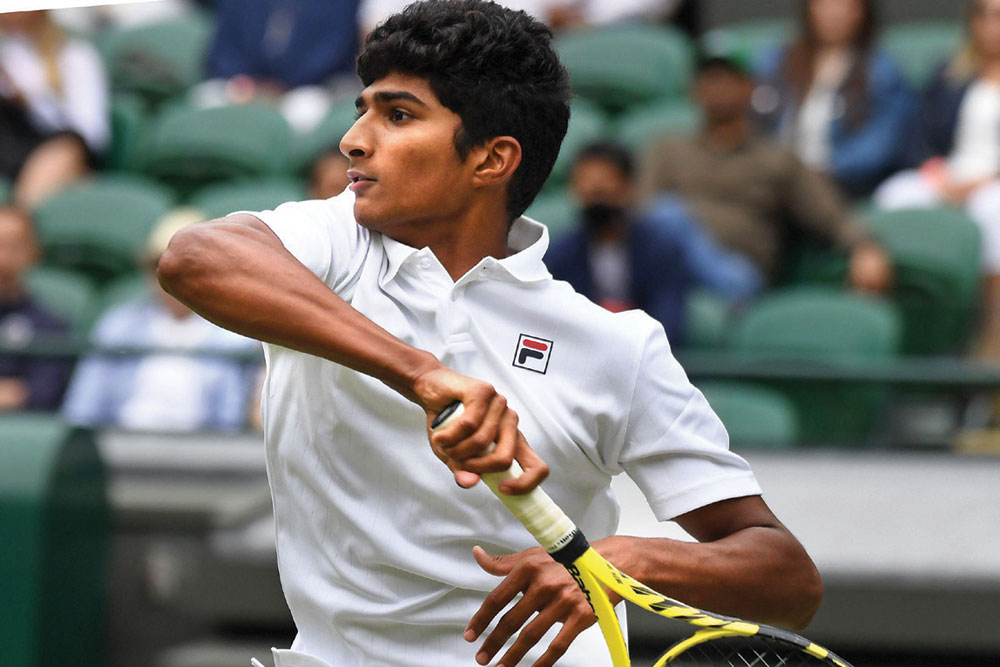 
THE PREMATURE EXIT of the solitary Indian representation at a Grand Slam came along expected lines, this time in the form of the mixed doubles pair Sania Mirza and Rohan Bopanna crashing out of Wimbledon’s round of 16. Yet, days later, just about 100 yards away from Centre Court where Novak Djokovic was starting the first set of what would turn out to be his historic 20th Grand Slam win, a plucky desi kid was sending down winners.

It was Samir Banerjee, a 17-year-old Indian-American boy from New Jersey and he had just won the boys’ singles Wimbledon title. He dropped his racket and put his hands on his head in disbelief when he realised what he had achieved.

Expectedly, we know everything about Banerjee now. We know he can speak Telugu, that he likes Andhra cuisine, and even that he is a good student. Indians are quick to claim a success story as their own. But even among these success stories—the doctors, engineers and software professionals—Banerjee’s is quite different. He is a sportsperson: that too, in tennis.

Banerjee’s story is perhaps emblematic of something new. His parents—mother from Andhra Pradesh and father from Assam—moved to the US in the 1980s, and like many other desis before them, took up model jobs (finance and pharmacy) and pushed their children to do well in academics. But as the second crop of desis, born and raised in the US, come of age, freed from the insecurities of immigrant lives and exposed to new ideas and ways of life, they break out from old patterns. Like Banerjee, who is believed to have grown a fondness for tennis when he accompanied his father and his father’s friends to their weekend jaunt at a tennis club and decided to pursue the game.

But as of now, a full-time career in tennis isn’t entirely decided. He is expected to join Columbia University sometime next year. His parents certainly seem inclined. Before the finals, his father was quoted in the Indian Express as saying, “It’s [tennis] a difficult sport, but a degree from Columbia will always be with him, it’ll always help him. It has good value… We’re just being realistic because we know how difficult the professional tour is. We’re educationally focused and we expect that from both our kids. But if he takes off in tennis, we haven’t shut the door.” The win at the final will no doubt have complicated these plans. And Banerjee himself has said he will re-evaluate his options and use the time he has before enrolling for college to consider his future.

Turning professional, however, isn’t easy. The distance between where Banerjee and Djokovic won their titles may measure only about 100 yards, but it is one very few have successfully crossed. Running your eyes through the list of boys’ single title winners in Grand Slams is an exercise in considerable head-scratching. No boy since Roger Federer, who won the Wimbledon boys’ singles title in 1998, has gone on to win a men’s title here. (In the women’s game, Ashleigh Barty, who won the women’s singles title at Wimbledon this year, had won the girls’ singles title in 2011.)

Turning professional requires a single-minded doggedness not just by the player, but invariably also by his family—not to mention a considerable financial investment. Wimbledon’s most famous junior champion quit his education and had his parents invest a small fortune to make the teenaged Federer the player we know today. “My parents spent around 30,000 Swiss francs (around Rs 25 lakh) a year to pay for my tennis training,” he once told a reporter. “But they were sceptical about my ability to become a professional player… When I was 16, I asked them if I should leave school to get 100 per cent involved in tennis. My father gave me two years to succeed.” Luckily, for Federer and his fans, those two years were enough.

If Banerjee does manage to make that transition, he can go on to become more than just a symbol of desi pride. The US has been desperately searching for its next top men’s player. The last time an American male won a major singles title was way back in 2003, when Andy Roddick won the US Open. Can Samir Banerjee, the plucky desi kid from New Jersey, become that player? There is a long way to go. But the Junior Wimbledon title is a promising first step.