A tenacious survivor in national politics and a popular Dalit face 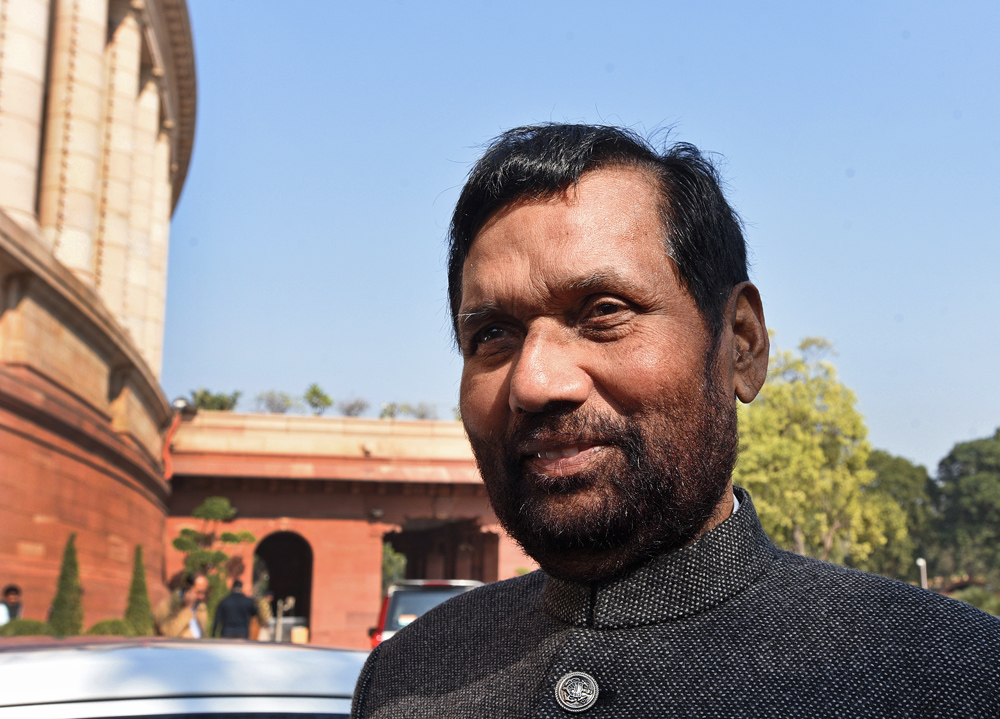 
Ram Vilas Paswan often said that an animal gets killed in a road accident when it is unable to decide which side it should turn. The politician took his own decisions, unwavering once he did, emerging a survivor each time in the rough and tumble of Indian politics.

The Dalit leader had the acumen to anticipate any change in the political dynamics, altering affiliations to be by the side of the party in power. It turned out that he found a place across party lines in governments led by six Prime Ministers— VP Singh, HD Deve Gowda, IK Gujral, Atal Bihari Vajpayee, Manmohan Singh and Narendra Modi.

He had, perhaps, also sensed a change in the mood of the voters in the home state of Bihar, where chief minister and Janata Dal (United) leader Nitish Kumar has been in power for the past 15 years. His son, Chirag Paswan, to whom he had handed over the reins of the Lok Janshakti Party (LJP) founded by him in 2000, decided to revolt against Kumar. When Paswan, 74, passed away at the Fortis Escorts Heart Institute, he held the consumer affairs, food and public distribution portfolios in the Modi cabinet.

Interestingly, 15 years ago, it was the senior Paswan who was instrumental in pulling down the 15-year-old Lalu-Rabri regime following which Nitish Kumar became the chief minister. At that time too, when both RJD and LJP were part of the Congress-led United Progressive Alliance (UPA), Paswan, a union minister, put up candidates against the RJD.

Even as he changed party loyalties- moving from Left, Right or Centre—  Paswan maintained cordial relations with former friends and allies. His famous Iftaar parties, where leaders cutting across party lines broke bread, stood testimony to his acceptability across the political spectrum. Journalists who have known him recall his culinary skills, cooking himself for them. He liked fish, guavas and “bhunja (a local puffed rice snack)”.

In Bihar politics, he broke the hold of chamars — Babu Jagjivan Ram’s legacy – to emerge as the main Dalit face.  Yet, driven by the realisation that backwards were critical for his own political growth and that it would not dent the scheduled caste quota, he backed the Mandal Commission report on reservation for backward classes in government jobs in the VP Singh regime in 1989-90. It was Rashtriya Janata Dal (RJD) chief Lalu Prasad Yadav, then the chief minister of Bihar, who spoke to Paswan and Sharad Yadav to get Singh to push for implementation of the Mandal Commission report. Post Mandal politics of Bihar, however, was dominated by Yadav and Nitish Kumar, who also emerged as one of the prominent faces of Bihar during the JP movement.

He remained a prominent face for over 50 years, despite Paswan, his core voter, comprising a small community, that too confined to Bihar. He started a Dalit Sena, headed by his brother Ram Chandra Paswan, focused on Dalit rights, reached out to Ambedkarites and was eulogised by his supporters with the slogan “upar asmaan, neeche Paswan (the sky above, Paswan on the land)”.  But, his movement waned, overshadowed by the emergence of Kanshiram in Uttar Pradesh. Paswan’s role remained confined to that of a kingmaker in national and state politics.

It was after he became an MLA at 25 for the first time in 1969 and moved from his village Shaharbanni in Khagaria district to Patna that he learnt the ropes of power politics. Those who have known him then recall that he often spoke about EV Ramasamy, known as the father of the Dravidian movement in Tamil Nadu, who came to be called “Periyar” which means elder person.

The boy who was born in a humble Dalit family, played games like gulli-danda in his village, did his post graduation from Patna university and was inspired by Dalit icons, wanted to join police, another symbol of power. However, influenced by socialist leaders like Ram Manohar Lohia and Jai Prakash Narayan, he plunged into politics. He joined Lohia’s Samyukta Socialist Party (SSP), which later merged into the Janata party. During the JP movement against the emergency imposed by the then Prime Minister Indira Gandhi, he went to jail for 19 months. After being a member of the state assembly eight times, in 1977, after getting out of jail, he won from Bihar’s Hajipur Lok Sabha seat with highest ever margin, entering the Guinness Book of World Records. There was no looking back after that. He broke his own record in 1989, winning the same seat by over five lakh votes.

Despite being a Dalit leader, he refrained from fomenting any antagonism between the Dalits and upper castes. For him no caste, class or party was untouchable. He brought in his family members into politics, facing the accusation of indulging in dynasty politics. He had not contested the Lok Sabha polls last year, making way for his younger brother and Bihar minister Pashupati Kumar Paras. He has handed over the party’s baton to his son, an engineering graduate who has acted in a Bollywood movie “Miley Naa Miley Hum” opposite Kangana Ranaut. The younger Paswan’s entry into politics has been very different from that of his father. Untested in the political terrain of Bihar, this election, in the absence of Paswan, will be Chirag’s litmus test in the heat and dust of Bihar politics.