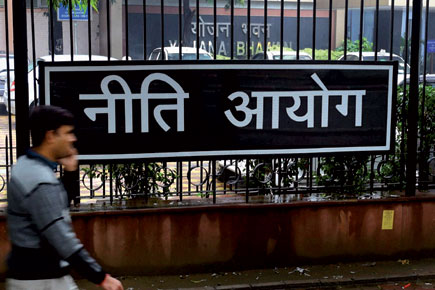 On paper the seventh meeting of the Governing Council of the Niti Aayog was exactly what such meets are billed as: a slew of speeches highlighting national priorities and the states listing what they want. Everything is done in a cordial fashion. Cooperative federalism is the operative mantra.

In reality, the states and the Centre are often at odds with each other. This meeting was no different. Prime Minister Narendra Modi’s emphasis on crop diversification and his stress on increasing food output, especially oilseeds and pulses, was a signal for reforms on the part of recalcitrant states.

After the meeting, during a briefing, Niti Aayog member Ramesh Chand linked the issue of crop diversification with that of groundwater exploitation in some states. The signal was clearly meant for Punjab and, to a somewhat lesser extent, Haryana. Chand, The Times of India reported, said that, “Some states made suggestions that if they are helped in a particular way they can go for diversification in a much faster manner…”

This goes to the core of the problem: The states are unwilling to rationalise their expenditures in a positive direction. Any mention of the word “freebies” riles them. Punjab is a particularly egregious case. A combination of cheap and free inputs—free electricity and virtually unregulated use of groundwater—has led the state to a brink of fiscal anarchy. The RBI’s study of state finances for 2021-22 shows that Punjab’s debt in 2021-22 was 53.3% of its GSDP and 21.3% of its revenue went towards interest payments. Yet, even at this stage, Punjab is unwilling to take the necessary steps to bring economic order. It wants the Centre to foot the bill if it is to diversify its cropping pattern. The state also wants a legal guarantee for Minimum Support Prices (MSPs). In effect, it wants the country to bear the cost of its mistakes.

Punjab, however, is not alone in making these demands. Chhattisgarh is another example. Chief Minister Bhupesh Baghel has demanded nearly Rs12,000 crore from the Centre for expenditure incurred on tackling Maoist violence. It is another matter that the state has been amply funded through various Central schemes like the Security Related Expenditure (SRE) scheme; Special Central Assistance (SCA) for Left Wing Extremism (LWE) districts and Special Infrastructure Scheme (SIS). Chhattisgarh has been given a large dollop of aid through these and other schemes. Baghel also wanted a five-year extension in the scheme of GST compensation and said his state had lost Rs5,000 crore due to GST implementation. He was joined by other states like Rajasthan and Kerala for an extension of GST compensation.

If left unchecked, these demands are unending. This is not an economic problem where there is a gap between means and ends. In that case, the Centre is duty-bound to help these states. But the issue is political: states—and especially political parties in states—want to spend and win elections. There is no way—and no means—for the Centre to fulfil these demands.